Let’s talk about sex: Ilya is the adult sex store you never knew you needed Facebook Twitter Copy URL
Copied
Armed with a friendly, informed staff and several flavors of ice cream, the Ilya team is turning sex talk in the Philippines on – one satisfied customer at a time

MANILA, Philippines – In a country where sex is still considered taboo and talked about in whispers and giggles, Ilya’s Maginhawa storefront gives us a big friendly hello.

There are no dim mood lights or heavy curtains that are common in local sex toy stores; only large, open windows that let a lot of light in, and give passers-by a glimpse of their wares which are gloriously, unashamedly displayed alongside dinosaur figurines, pineapple inflatables, and other things one would sooner expect to find in a kid’s playroom than a sex shop. 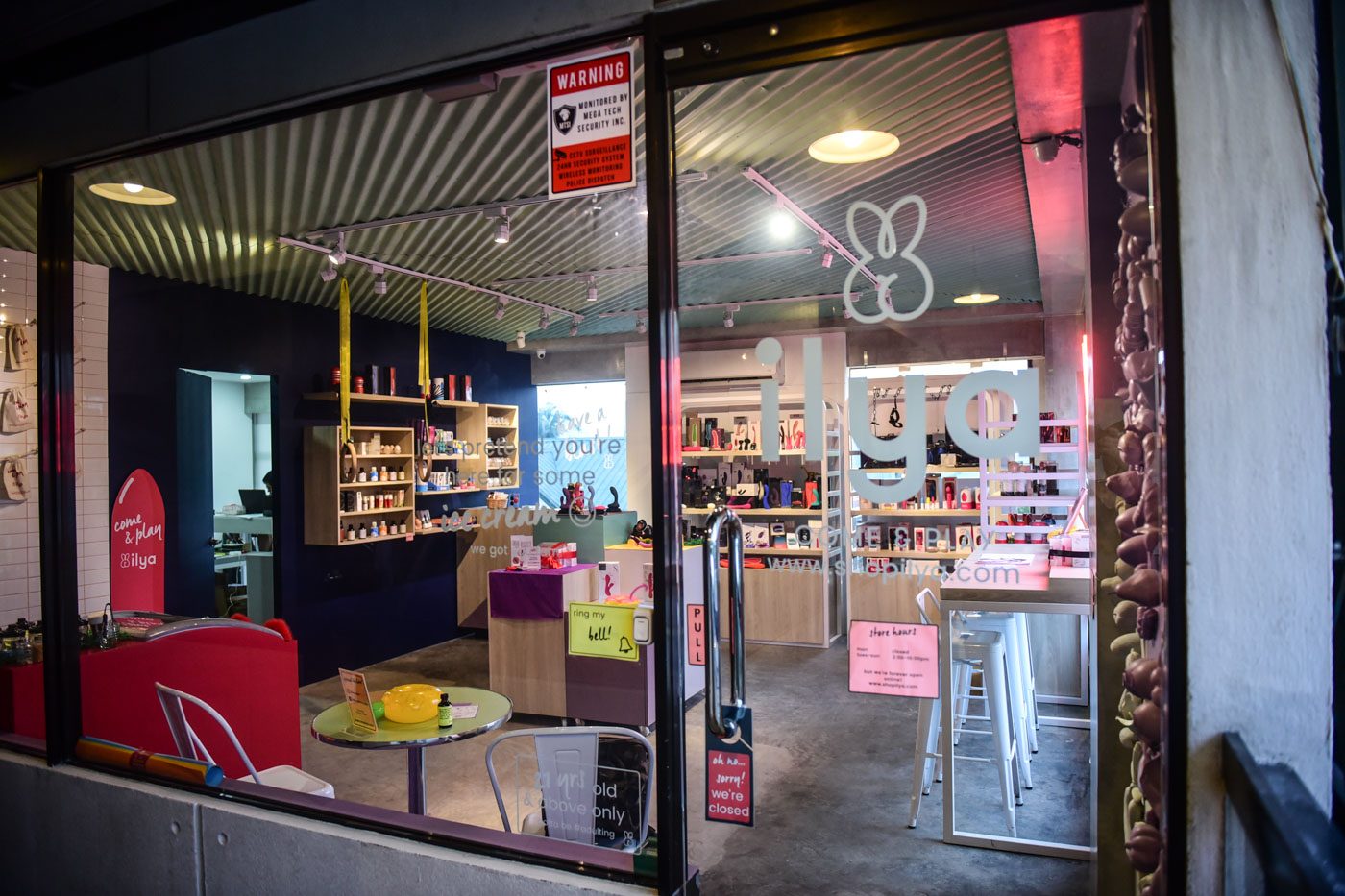 The store is highly visible fro the sidewalk of Quezon City’s quirky Maginhawa street, where it shares a building with a cat cafe and a Vietnamese restaurant.

As Ilya co-founder Arvin Alvarez said, the look of the store was deliberate, symbolic of their own attitude towards sex and sex toys. Of course, this open attitude has caused more than their share of raised eyebrows. Arvin shared one instance where a distressed passerby gave Ilya a 1-star rating on Facebook, along with a comment that might as well have read, “have you no shame?” The Ilya team responded to the comment with sober politeness and an invitation for further discussion, carrying on unfazed. Sex, after all, is nothing to be ashamed of and Ilya is here to remind us of just that.

Considering that we are in the Philippines – a place where condoms are still controversial, birth control pills are becoming harder to come by, and the idea of bringing sex education to high school students leads to years of debate – the reactions to what is otherwise a big, friendly, and new commercial venture could have been much worse.

Aside from the one comment and annoying gag callers every now and then, the response to their brand, said co-founder AJ Osmeña, has been generally positive so far – something neither AJ nor Arvin (nor their parents) expected when they opened their online store in October 2016. “I guess this is the unique thing about this. We also [know what it’s like to be] shy about it, so we kind of understand where people are,” Arvin said.

“There were a lot of giggles,” AJ added. “[But] it’s just a matter of being exposed to it.”

This explains the pun-filled writing in the language of their Facebook and Instagram pages. As Arvin pointed out, “That’s how Filipinos tackle difficult things – we joke about it.”

If the jokes fall short, there is always the ice cream – supplied by the Dairy Grind – which they serve in store in case anyone needs an excuse to enter a sex toy shop other than to look at their intimate wares.

The ice cream strategy has actually proven effective (and why wouldn’t it? The butterbeer-flavored ice cream is something one might describe as better than sex).

According to Arvin, a couple initially came to Ilya for the ice cream, but would start asking about the toys with every ice cream run. They eventually ended up buying their first sex toy. Of course, the idea to steer the conversation towards sex is one that shouldn’t always need to be veiled in humor or ice cream – though Arvin an AJ acknowledge that it will probably take some time – which they are only all too willing to give. For them, the the need to be able to converse about sex openly is too important.

“We’re so scared of talking about it because it’s sex, but isn’t it more dangerous if we don’t talk about these things, if we keep silent about it?” Arvin said, pointing out that important health matters such as sexually transmitted infections and birth control are swept under the rug because people are so scared of even uttering the word “sex.” Until we reach a point where the word sex is no longer a taboo subject – and we fear that that may still be 10 years down the line – the Ilya team is ready to answer any questions people have about sex and sex toys as best they can.

The store is a safe place to be curious and on top of that, it’s a lot of fun – exactly like the toy stores of our childhood. Most of the toys have samples set out for people to tinker with, touch, and feel. AJ and Arvin are always there to answer any questions you might have, no matter how basic. Aside from making orgasms easier to achieve, sex toys also empower its users and encourage communication between partners.

“You get to learn about your body, something we don’t see as important in this society. You get to know what you want, you learn to accept what you want and don’t want, and you learn to talk about it. So when you’re with a partner, communication is easier,” Arvin said. “When you use sex toys with a partner, it kind of forces you to talk, to communicate what you like, what you don’t like,” she added, saying that sex toys encourage couples to be more experimental as well as fostering healthy intimacy.

Whether one is excited about the idea of sex toys, or still turns into a giggly, blushing teenager when they hear the controversial word, Ilya’s doors – like their attitude towards sex – are always open. – Rappler.com