Save and share: The key to affordable organic produce MANILA, Philippines – At her organic farm in Silang, Cavite, Karla Delgado noticed that there just wasn’t enough produce to feed all of the farmers’ families and have leftover to sell, which goes into paying their salaries. She came up with a hack: share the seeds.

“We consulted with them and asked, what are your favorite vegetables? What are the easiest to grow?’” she says. “Their faces lit up when they saw how growing their own food would have a direct impact on their income. Instead of spending their income on pesticide produce at the palengke, and carrying it back home on tricycle, they grow organic in their own backyard.”

Kai Farms, which called it the Growing Abundance Project, began distributing seeds of cucumber, tomato, kangkong (morning glory), stringbean, eggplant, okra, and winged bean. “It was our dream to make organic produce affordable for everyone. The hack is that the answer doesn’t lie in pricing. The answer is to share organic seeds with farmers so they can do backyard farming which can yield two tons of food in a year,” says Delgado.

Organic seeds are actually very hard to find in the Philippines, and farmers often have no choice but to purchase hybrid and non-organic seeds, which are treated with fungicide. In June, Kai Farms hosted its first Seed School, an educational course that teaches proper, age-old seed saving techniques to anyone who’s interested in sustainable food production, from farmers, gardeners and chefs, to NGOs, activists and policymakers.

Saving seeds from indigenous and heirloom specimens is a more important task than people may realize. We know that a seed contains everything a plant needs to grow and reproduce – it is the natural cycle of life. But farmers today have to keep on buying seeds from biochemical corporations, which develop seeds that are sterile. The debate about GMO usually brings in the question of how the world is to feed an increasing population if we don’t employ fast-growing crops grown on an industrial scale. But this rationale, or perhaps myth, only serves to cover up the destructive environmental practices of agribusiness.

Delgado and other food activists believe that the effects of replacing natural evolution, which creates disease-resistant crops, with patented “dead-end” seeds that produce disease-prone crops, are making small-scale farmers even more vulnerable to the effects of climate change. During Kai Farm’s seed distribution, the farmers described what they thought of organic farming: “maayos, maganda, masustansiya (organized, good, nutritious),” they said. I wondered how, as long-time tillers of the land, they were won over to the benefits of organic farming. The average Healthy Options shopper will opt for organic faster than you can say “kale smoothie” because they can afford to, but how do you convince those with greater food insecurity?

Delgado says they take a fun, humorous, and interactive approach to sharing knowledge and expertise with their farmers, inviting doctors from UP-PGH who sing and dance with them about the healing power of food and nature. They also hold community clinics on making natural medicines from indigenous plants like lagundi, calamansi, and pansit-pansitan, which grow wildly around the 25-hectare property. At a festival, chefs from Siglo Modern Filipino restaurant created a farm-to-table lunch using the farm’s organic ingredients, and in a speech, told the farmers: “What you do is the most important job in the world. Keep up what you do, because without you, we would have no food to prepare.’”

“It meant a lot to the farmers to be acknowledged in this way by the chefs, and in front of their families,” says Delgado.

A tour around the farm will give visitors a better sense of what permaculture is all about. Permaculture is a design process and philosophy that goes beyond organic farming, working with nature and with what’s available in the surroundings rather than importing ingredients into the farm.

Mark Garrett, a permaculture design consultant from Australia (who also did Richard Branson’s Necker Island) helped introduce its principles to Kai Farms in 2014, when the farm was already growing vegetables without the use of pesticides, but wasn’t fully integrating the environment in a holistic, cyclical way. Permaculture takes into account the contour of the land, the direction of the wind, the types of endemic species found, as well as other resources, harnessing each of their energies to work together and minimize waste. At Kai Farms, compost is made from banana stalks, the fallen fruit of the tibig tree, napier grass, and calliandra – all found in abundance. The vegetable beds are non-linear and follows the slope of the land in order to prevent nutrient loss from topsoil runoff. Swales (shallow ditches dug along the land’s contour with plantings on the downhill side) were built to manage water runoff during the monsoon season; and rainwater is harvested for irrigating the food gardens.

Before they adopted permaculture practices, plastic mulch was used to cover the soil. When they tested the soil, it was acidic and “dead.” Now, they use natural mulch like kakawate and calliandra, which are nitrogen fixers that feed the soil and make it nutrient-rich, and protect the soil from drying out in the sun. Delgado’s first year or two at Kai Farms were actually spent healing the land – bringing the soil back to life before any new roots were put down. 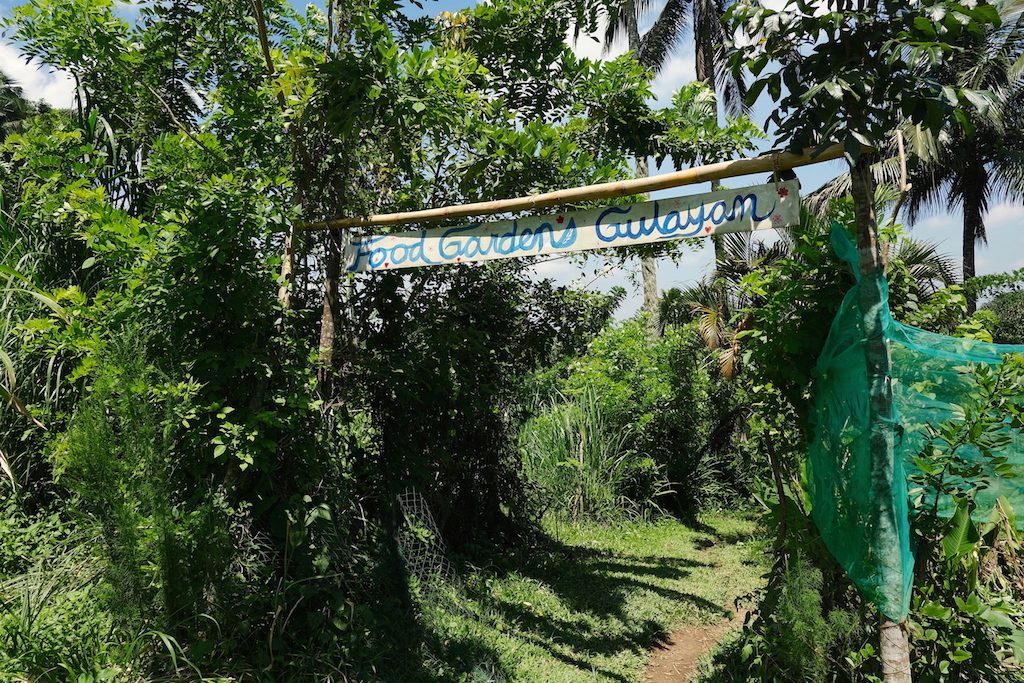 As part of the farm experience, I got to plant a tree. It was a lipote tree, a native species that bears fruit with medicinal properties, but can also be used to make wine. After transferring the sapling to the hole, I covered it with farm-fresh compost and organic mulch, then gave it a healthy watering of compost tea made from worm poop. At the nursery, I also sowed amaranth and cilantro seeds in banana leaf pods, which will be placed directly into the soil. If all goes well, they should make it into a future delivery of Kai Farms’ harvest baskets, which includes whatever is in season and ready to harvest – all wrapped in banana leaves and bagged in a reusable bayong.

Delgado came to farming after a long career as a writer and journalist, and only after she took a purpose-discovery workshop with Nick Perlas that asked trigger questions like, “What bothers you most about the situation in the world today?” She wrote down that she was bothered most by how unsustainable and toxic our lives are, and how so many people are getting cancer. After looking at all her answers, her reaction was, “Really? I’m meant to be a farmer?” And seconds later, “Of course! I knew it all along.” Two weeks later, her father, who founded the conglomerate TDG, asked her why she didn’t get more involved in the company-owned Kai Farms. “It’s amazing, but as soon as you know what your purpose is, the universe works with you and puts you in touch with the people who are going to help you and whom you are going to help,” Delgado says about her journey since.

“It’s a chance to do something about what isn’t right in our cities and in our communities,” she says. – Rappler.com

Good food doesn’t have to be expensive. Get the tastiest food delivered right at your doorstep!