Want a debut like Isabelle Duterte’s? This is how much it’ll cost 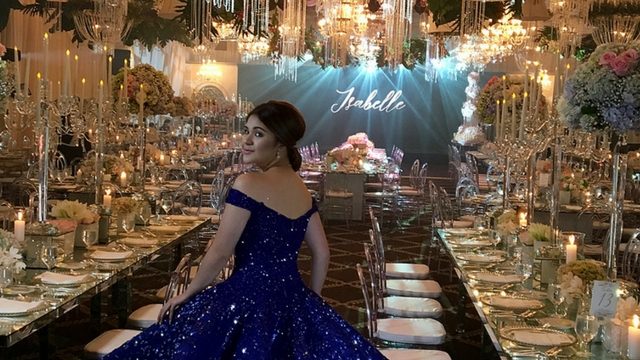 MANILA, Philippines – ICYMI (but, really, how could you have?), Isabelle Duterte’s debut happened on January 19, and President Rodrigo Duterte’s granddaughter spared no expense in putting together a lavish affair that started with a pre-debut shoot in the country’s seat of power and culminated in a grand event held in one of Manila’s toniest hotels. (TIMELINE: The glitz and glamor of Isabelle Duterte’s debut) For those about-to-be debutantes who are taking notes, we asked a few events planners how much it would cost to mount such a celebration.

By now people will know of Isabelle’s pre-debut shoot, which saw Isabelle bringing in a glam team plus a wardrobe of designer gowns to Malacañang Palace. The resulting photos included Isabelle posing in front of the presidential seal, as if to remind the world who her grandfather is, which then resulted in a sparring match with her own father, Paolo Duterte, on social media.

Save the Date video and photos

#Bellessima18 at the Iconic Opera House

And what do the flower buds pushing up from the broken earth say about you we break, to grow. -pavana- Isabelle’s coming of age. #bellessima18 #jpvelardephotography

As if the Malacañang shoot wasn’t enough, Isabelle also held a destination shoot in Australia (P20,000 per airplane ticket, economy class, exclusive of taxes). Isabelle brought another set of couture gowns to the shoot, including a black floral gown and a purple and green gown by Garimon Roferos (P500,000 each), and a black ensemble with eagle print bottoms by Edgar Buyan (P100,000). The photos were done by Sydney-based photographer, JP Velarde (P120,000), while the video was done by Gianne Carlo Chua Visuals (P120,000). Styling was done by Ivan Jeric Digamon (P80,000).

The invitations to Isabelle’s debut were done by Print Divas. The pink cards, designed with floral watercolor graphics, also include a small LED screen playing scenes from Isabelle’s Australia shoot inside (P1,500 per piece).

The debut was held at The Peninsula Manila’s Rigodon Ballroom and organized by Rita Neri Events Planning (P200,000-250,000). Outside the venue, guests worked it at a video booth (designed by Moki Gray), managed by the debut’s videographer, Hello and Co. Cinema (P80,000). As with her Malacanñang Palace shoot, the official photos were done by Lito Sy (P150,000). (IN PHOTOS: Scenes from Isabelle Duterte’s grand debut)

Inside the venue was a lavish set up that would make Marie Antoinette proud. It was styled by Robert Blancaflor (P1M), with audio and lights set up by Forsc Ink (P1M). The extravagant set up includes a floral tunnel leading guests into the ballroom, and a collection of chandeliers dangling from the ceiling.

Isabelle likes it pastels so we created a room full of white and blush using Dainty centerpieces, candelabras and an elaborate Ceiling Design using #AllFresh Flowers and Foliage with candelabras and other installations. The Tables were mirrored and clear with gold beaded showplates and clear Transparent Chairs. #RobertBlancaflorGroup #EventStylingPH #DebutsPH with #RNEPEvents @forscink_socials @rnepevents #BELLEssima18

At the end of the night, guests went home with customized perfumes (P800), while two winners of the best-dressed title went home with Hermes goodies (min P10,000).

Isabelle wore no less than 5 outfits on the day of her debut – which is no longer surprising considering all the ballgowns and designer garments she’s been wearing in the run-up to the big night. Her debut wardrobe was styled by Jeff Galang (P50,000). (READ: A rundown of Isabelle Duterte’s debut looks)

She wore a boudoir robe by La Tercera (P10,000) while she had her hair and makeup done. Her hairstylist was Allan Vicentico, and her makeup artist was Winn Ramos (P50,000 for both).

She changed briefly into a Michael Leyva gown for a shoot before the party (P200,000).

She changed into a crisp, white Orias pantsuit for a dance number (P50,000). Editor’s note: In an earlier version of this story, the price of airfare to Sydney, Australia was erroneously quoted as P120,000; it is actually P20,000. he value of the airfare has been changed in the article to reflect the correct estimate. Hello and Co. Cinema provided both the video coverage for the debut and the video booth. The video booth was designed by Moki Gray. All prices quoted are approximations and not the exact amounts that were paid to the suppliers.