Artists to look out for at Art Fair Philippines 2018 Facebook Twitter Copy URL
Copied
With so much to see, you wouldn't want to miss these artists' works

MANILA, Philippines – Art Fair Philippines 2018 is now well underway, with the event drumming up perhaps even more excitement among viewers because this year’s fair is the biggest to date. This time around, it’s taken over all available floors of its home venue, and includes a brand new section: ARTFAIRPH/PHOTOS. (READ: How to enjoy Art Fair PH 2018: Take your time, but skip the selfies)

Of course, more space means more art from more artists, so people are bound to run into a piece that makes them stop in their tracks at every turn. (IN PHOTOS: A first look at Art Fair Philippines 2018).

In that heady throng of installations, paintings, sculptures, and photographs, here are just some of the names one should look for: 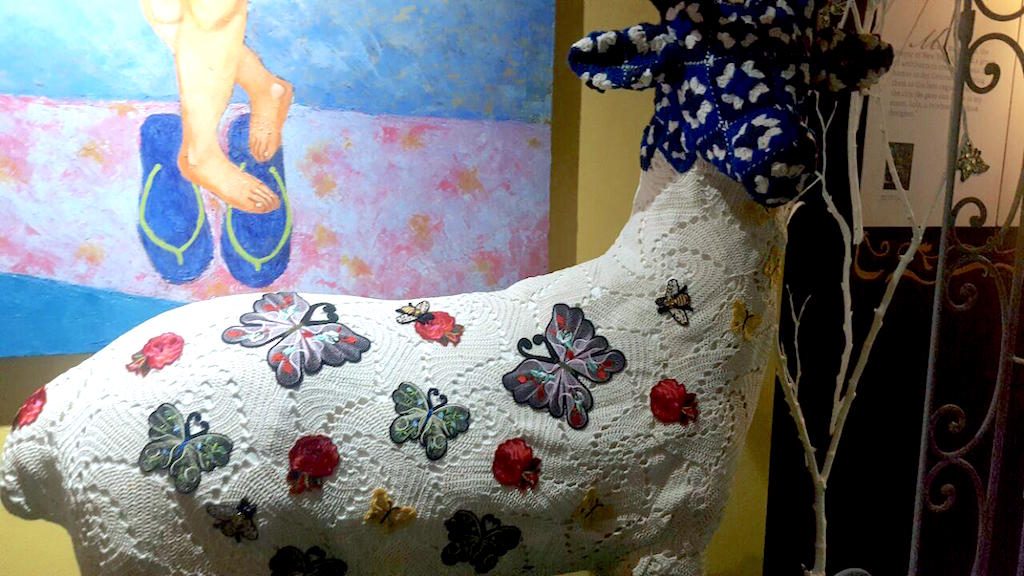 Plet Bolipata’s Art Fair exhibit, “Impromptu (Little Red Riding Hood in Central Park Tableau),” is what it might feel like if Betsey Johnson read a children’s storybook out loud while on uppers. The Red Riding Hood-themed exhibit makes use of a mishmash of materials to bring Plet’s version of the story to life: motion pictures, music, film, crochet, lace, and even a dollhouse fitted with several mobile phones playing a Red Riding Hood hologram on loop. The result is an exhibit that is eccentric, elaborate, exciting, and bold in its vision, taking on themes that are especially relevant to women, such as coming of age, and struggling with sexual predators. The brand new photography section not only sheds light on the importance of photography as an art form and as a form of storytelling, but it also gives viewers the chance to appreciate the work of some of the most talented photographers the world has seen. There is of course, the Weegee exhibit, but right next to it is “Kin,” an exhibit featuring the works of editorial and fine art photographer Neal Oshima. In “Kin,” Neal traces the connections between humans from different tribes in stunning black and white photographs of indigenous people from various areas in the country. The Art Fair’s photo section also showcases the work of several photojournalists, including Carlo Gabuco, who has been documenting the victims of the Duterte administration’s war on drugs – both the casualties and the families they leave behind. Carlo’s work, which can be found in the documentary photography segment of the photo exhibit, as well as in the multimedia exhibit, “Everyday Impunity” – depicts the drug war with a determined honesty, capturing moments of grief, sadness, and power from the most unique angles. 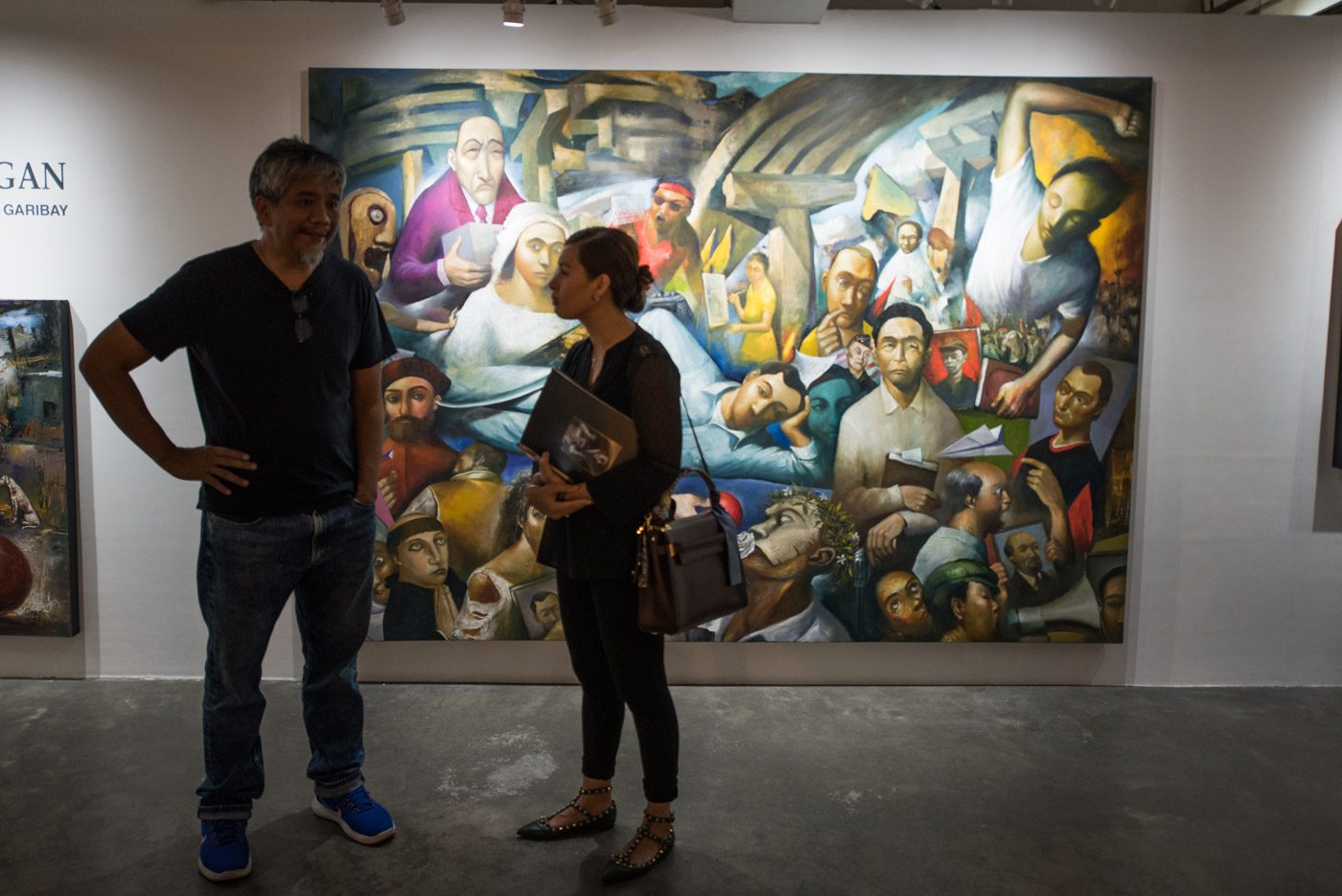 Emmanuel Garibay’s paintings are like a Where’s Waldo image on a bigger, more aesthetically sophisticated, and more thought-provoking scale. The artist explores the country’s socio-political history in a series of paintings under his exhibit, “Lansangan.” With a subtly humorous flair that comes across in exaggerated human features and use of bright colors, Emmanuel takes a dig at the problems Filipinos face daily: from inadequate infrastructure, to the way the internet and social media are being used as weapons. The exhibit’s centerpiece shows a slew of familiar faces, bringing together figures from Philippine history and current events to make viewers realize just how heavy our history weighs on us, even today. On display at the Arndt Art Agency’s booth, Yeo Kaa’s series of paintings will intrigue you even before you see them, hidden as they are behind a white wall that has the artist’s name painted on it almost irreverently, like graffitti, followed by the word “sorry” repeated 3 times, each word struck through. When you walk farther in, that’s when you see Yeo’s work, which features paintings done in the brightest neons, hanging on a white wall graffitti-painted with more neons. The colors she uses are so vivid, you almost don’t notice the black figures in each of her paintings, and then you do, and realize just what the artist is depicting. Yeo’s work is an honest take on depression and anxiety that manages to be simultaneously playful and sobering – a true feat that she pulls off with flair. The artist’s knack for playful but biting commentary is on full display in his exhibit, “Side Effect.” A colorful board game sits at the center of the exhibit, with the anatomy of a pig in the center of the table, its parts labeled by words that often turn up when politicians make promises. The rest of the pieces in the exhibit feel very much like traditional folk art – but with a contemporary twist in the choice of colors, as well as the boldness of the themes, proving that the artist is as thoughtful as he is talented. Hidden behind a wall that reads “Southeast Asian Artist To Be or Not To Be” is Lyra Garcellano’s “Tropical Loop.” The media installation is the artist’s take on geopolitics and our history of colonization. The installation includes two videos shown alongside each other. One video depicts a woman going up and down a flight of stairs endlessly while winnowing rice – an act that is as tedious to watch as it sounds. To the right of this video is another showing an ever-so-subtly dynamic tropical countryside. Together, the two moving images invite viewers to ponder on ideas of the Filipino identity in a Western-influenced world.

Art Fair Philippines 2018 will run until Sunday, March 4, at The Link carpark in Makati. – Rappler.com