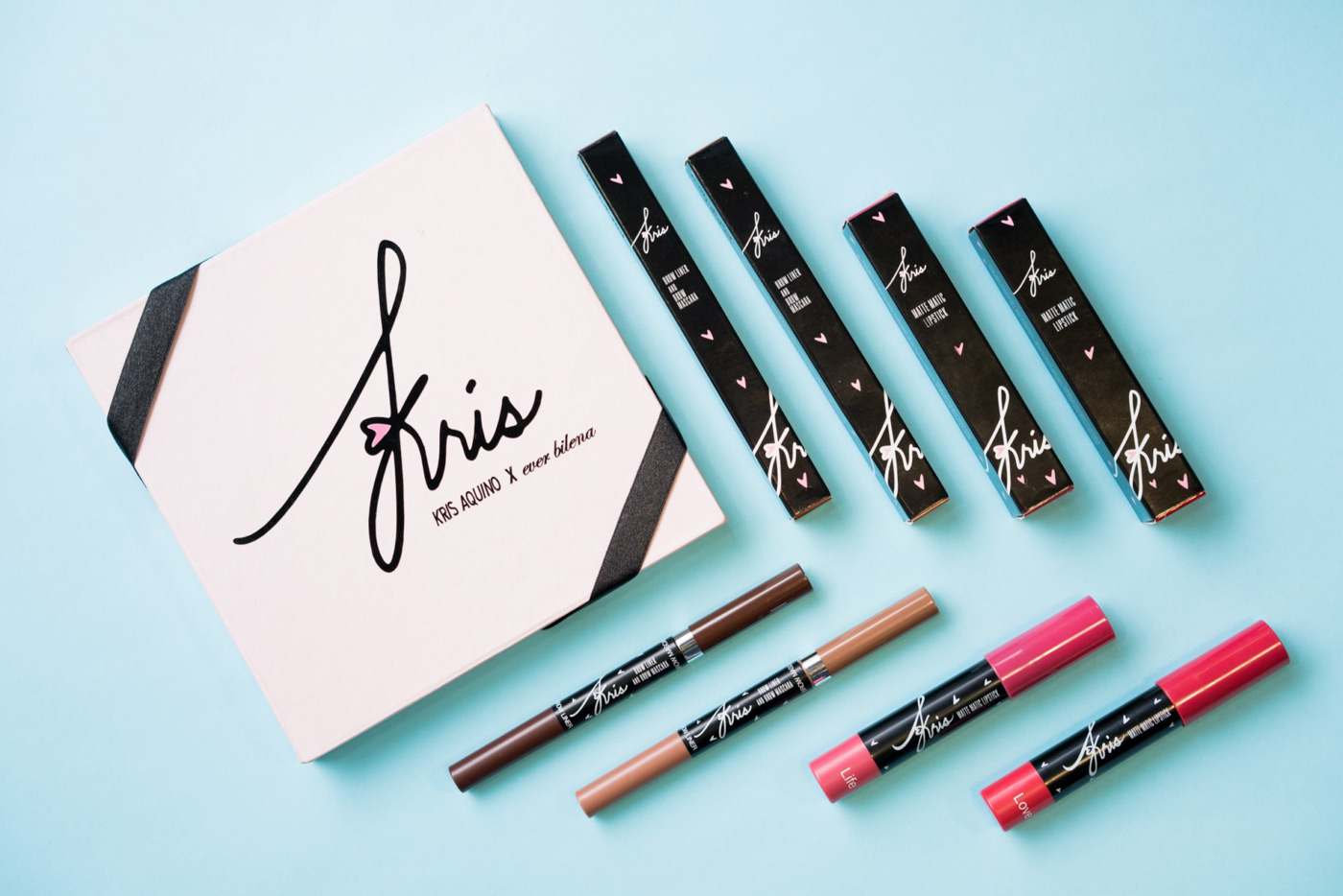 MANILA, Philippines – Local makeup giant Ever Bilena recently launched the first of many releases from its collaboration with “Queen of All Media” Kris Aquino.

It’s a collaboration that’s a dream come true, if you will, for Kris, who noted that it was made “for a girl who really just adores makeup.”

All in all, it took around 5 months between the contract signing and the release of “Life Kit.”  In true Kris Aquino fashion, the media preview wasn’t just about her new makeup line but the process of creating a makeup line, collaborating with a businessman whom she jokingly said “didn’t [get her],” and other, more personal details that tonly a personality like Kris would be able to divulge in public.

But we (and so did Kris) digress.

For the first release of Kris’ collaboration with Ever Bilena, there are two lip shades – “Love,” a blue-based red, and “Life,” a pale pink shade. The liquid lip versions of the shades are set to be released in July 2018. 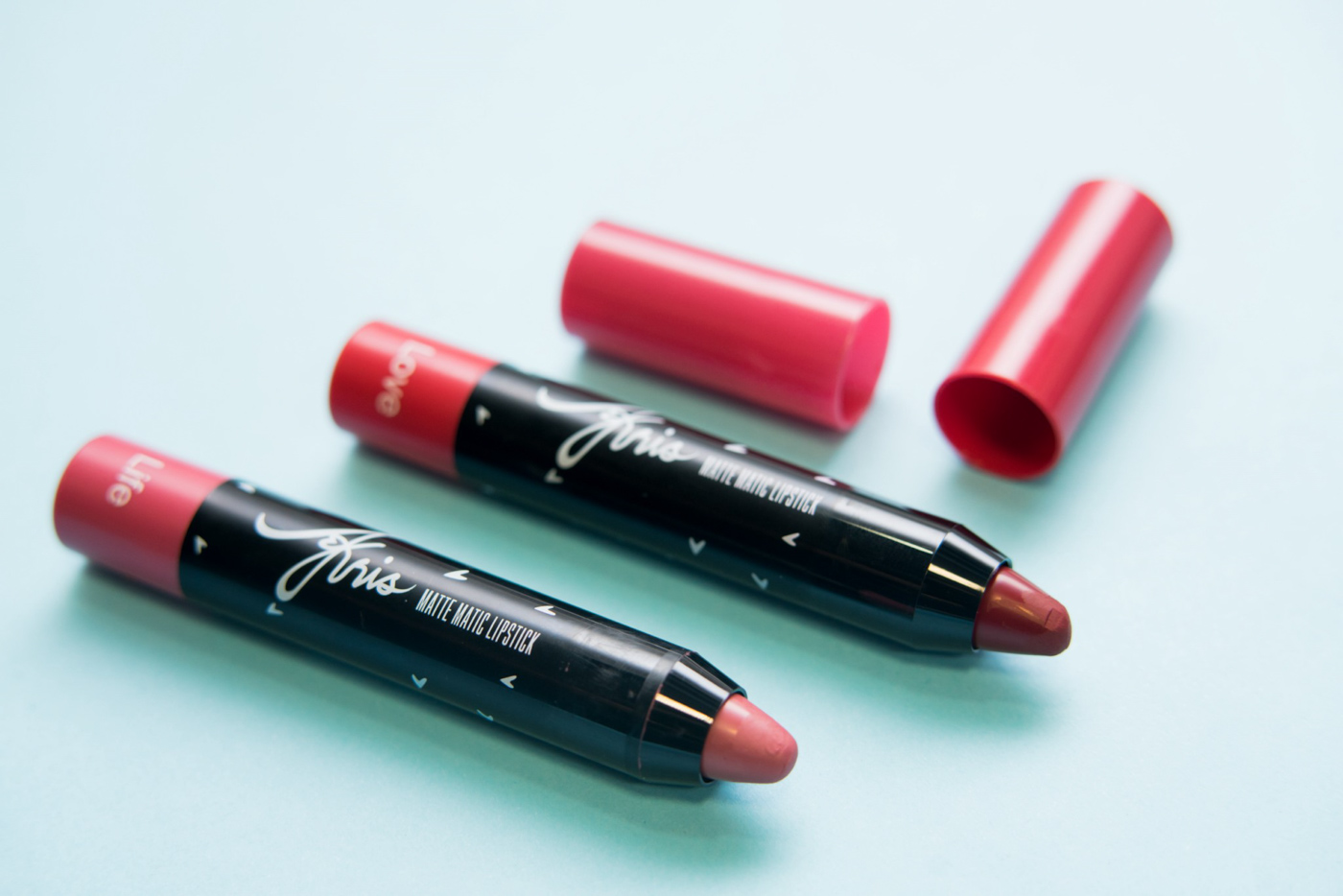 The first two shades cover all bases – there’s a bold red shade and a more subtle pink one.

One of the most important business considerations for Kris’ collaboration with Ever Bilena was for the shades to be universal. Dioceldo Sy, Ever Bilena CEO, was in constant communication and debate with Kris over the shade selection, Kris herself said.

“You have to remember that your skin is only 8% of the population,” he’d remind her. She reassured him that the shades would complement any skin tone. True enough, the process involved not just Kris – who has very pale skin – but her team of assistants and aides who have different skintones and undertones. 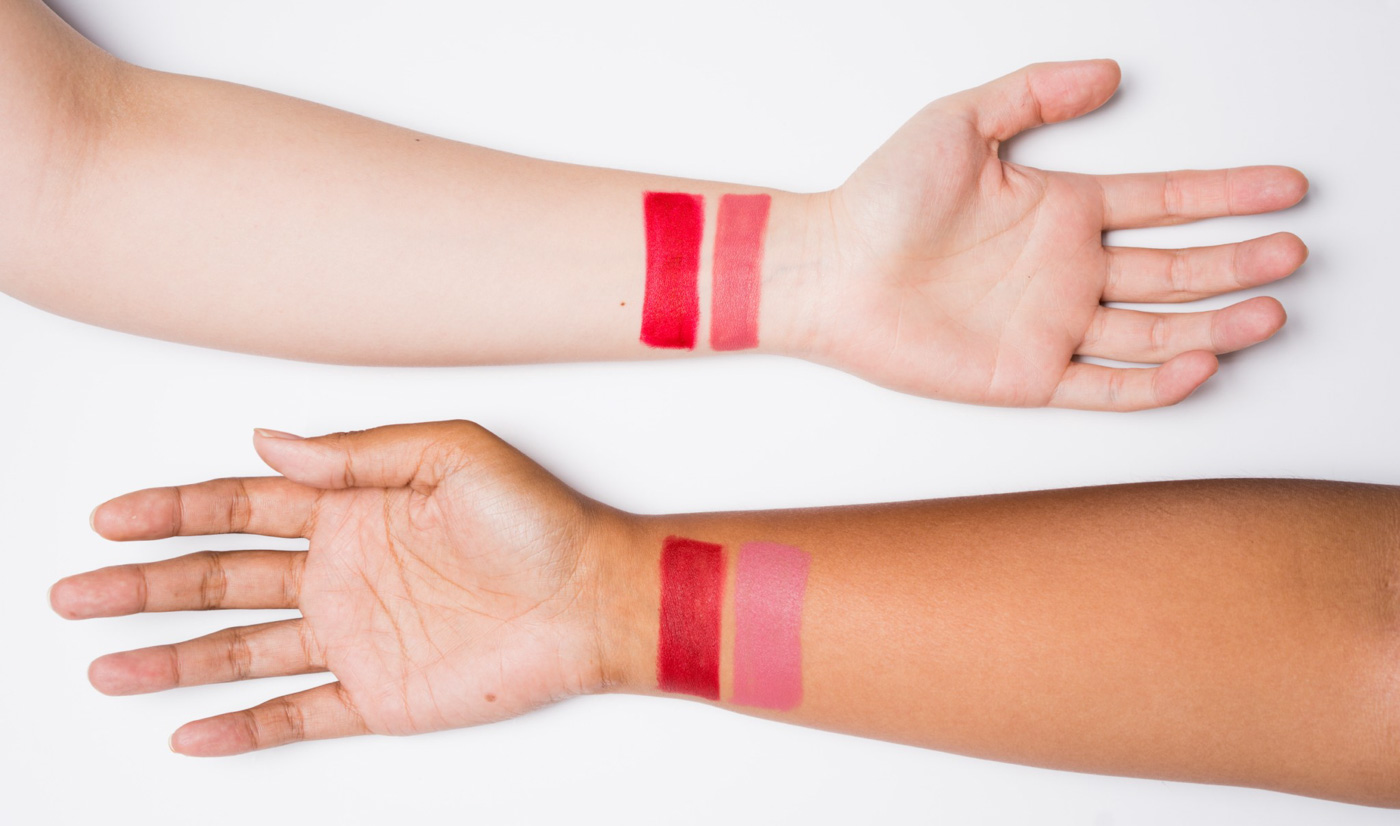 Application is a breeze, thanks to the lip crayon design. It doesn’t exactly glide on the lips, but it doesn’t pull as well. At the same time, the matte lipsticks aren’t too drying even on my notoriously dry lips – a definite plus.

The packaging makes it feel a little more luxe than other Ever Bilena products. Kris was particular about that, too. Count the hearts on the tube – there are 14, because Kris was born on February 14.

Matte Brow Liner in Happy Taupe and Beyond Brown (P275)

And what Kris Aquino makeup line would be complete without kilay (brows), right? Because kilay is life, Kris made it a point (or demanded, we’re not sure) that a brow product be released alongside lip colors.

Her Matte Brow Liner is a dual-ended product – there’s an automatic brow pencil with a tear-shaped tip on one side, and a brow mascara on the other.

So far, there are two shades available – Happy Taupe and Beyond Brown. 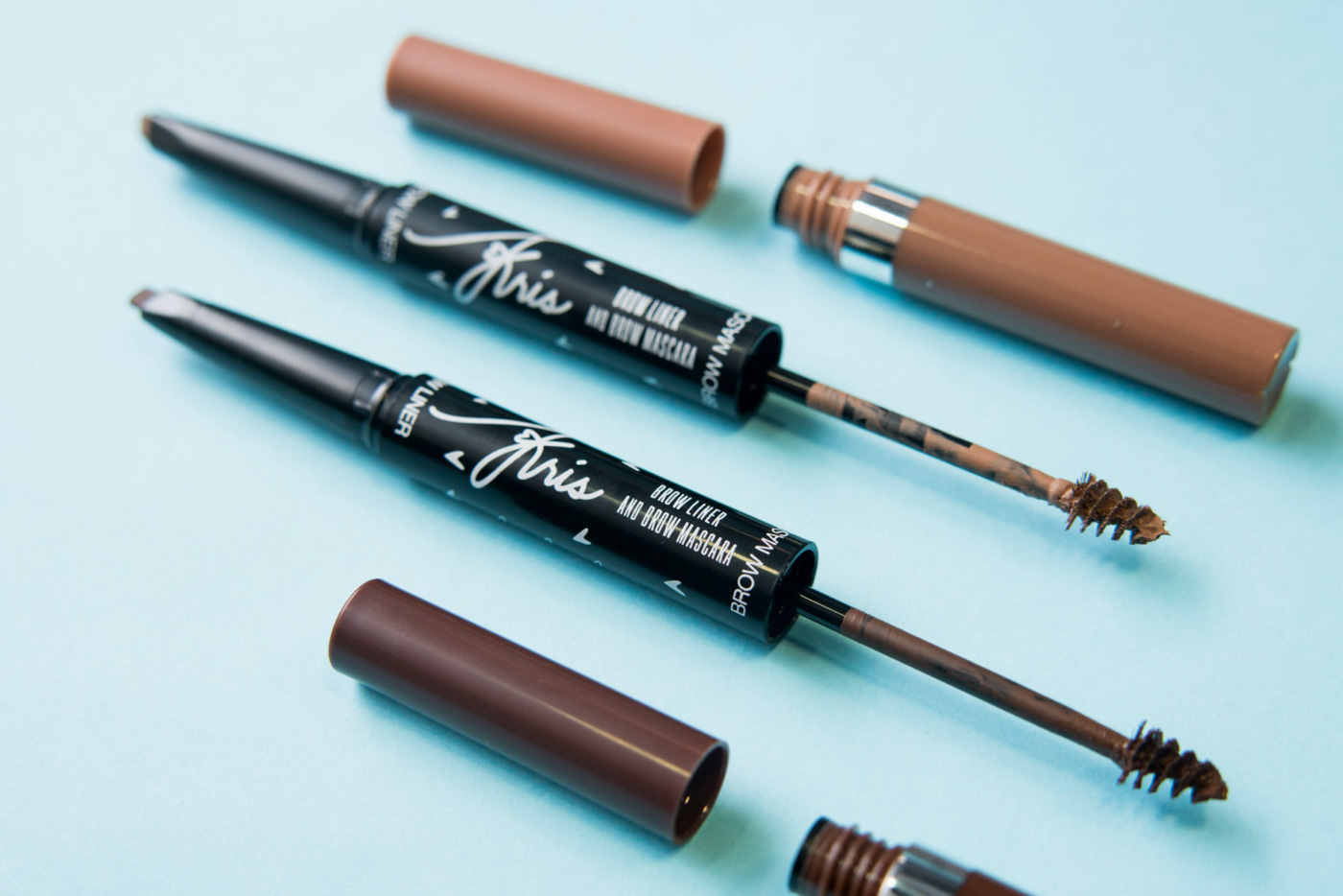 It’s at this point where we have to digress a bit and talk kilay and Kris Aquino. The multimedia star, since time immemorial, has always put a prime on her brows. This is how particular she is – it must be the right shade (obviously), it must be easy to apply, it must last, and most importantly, it must be irritant-free.

The last part is most important because Kris, in all her candor and one-of-a-kind-ness, admits that she wears kilay to sleep (after all her SK-II, of course). The rationale? Just in case her house burns down in the middle of the night, her kilay should still be on fleek. (She says she also wears lip color to take pictures pre-sleep because her pale complexion might scare off food endorsements.) 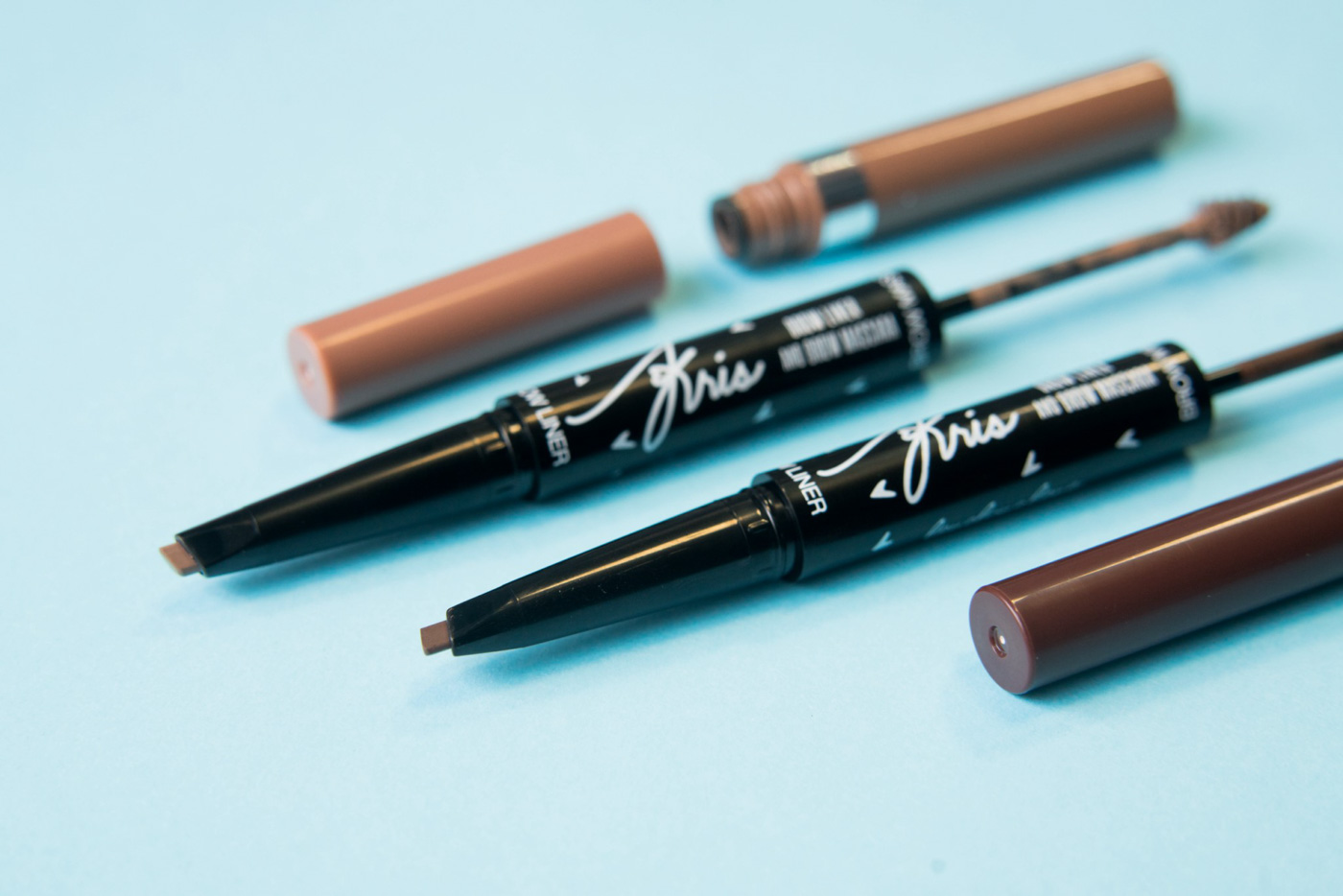 Okay, back to the product. Kris said she’s very particular about the consistency of the brow pencil. It’s creamy enough and doesn’t tug at your skin at all. Cosmetic brands have always tried to innovate the brow pencil tip, haven’t they? There are the “micro” ones that claim to mimic actual brow hair, the triangle-shaped ones that supposedly make it easier to apply.

I’m not sure if the teardrop tip makes it any easier, but I like it better than the triangle-shaped ones because I find that the latter can be too angular – but that’s just me.

The brow mascara isn’t life changing but does the job – bonus points because it doesn’t leave my eyebrow hair stiff and crispy.

We’ve only had the product for a day so we can’t attest to its longevity just yet. But like most pencil products, it’s best to set this with brow powder, a brown eyeshadow, or transluscent face powder just to be sure.

The lip products and the brows are just the start. Ever Bilena will be launching more lip shades under the Kris Aquino line in the coming months. Other things to look forward to? A blush line, powder which Kris swears is a dupe for her high-end favorites, and a fragrance line.

Over all, the Kris Aquino and Ever Bilena line is impressive, not so much because it’s a collaboration of two of the biggest names in Philippine media and beauty but because thought was clearly put into the development of the product.

But really, do we expect anything less from these two giants? – Rappler.com

(Full disclosure: We get the products for free during the launch of the Life Kit. Our opinions, streams-of-consciousness, however, are our own. Kris Aquino’s narrations are also her own.)