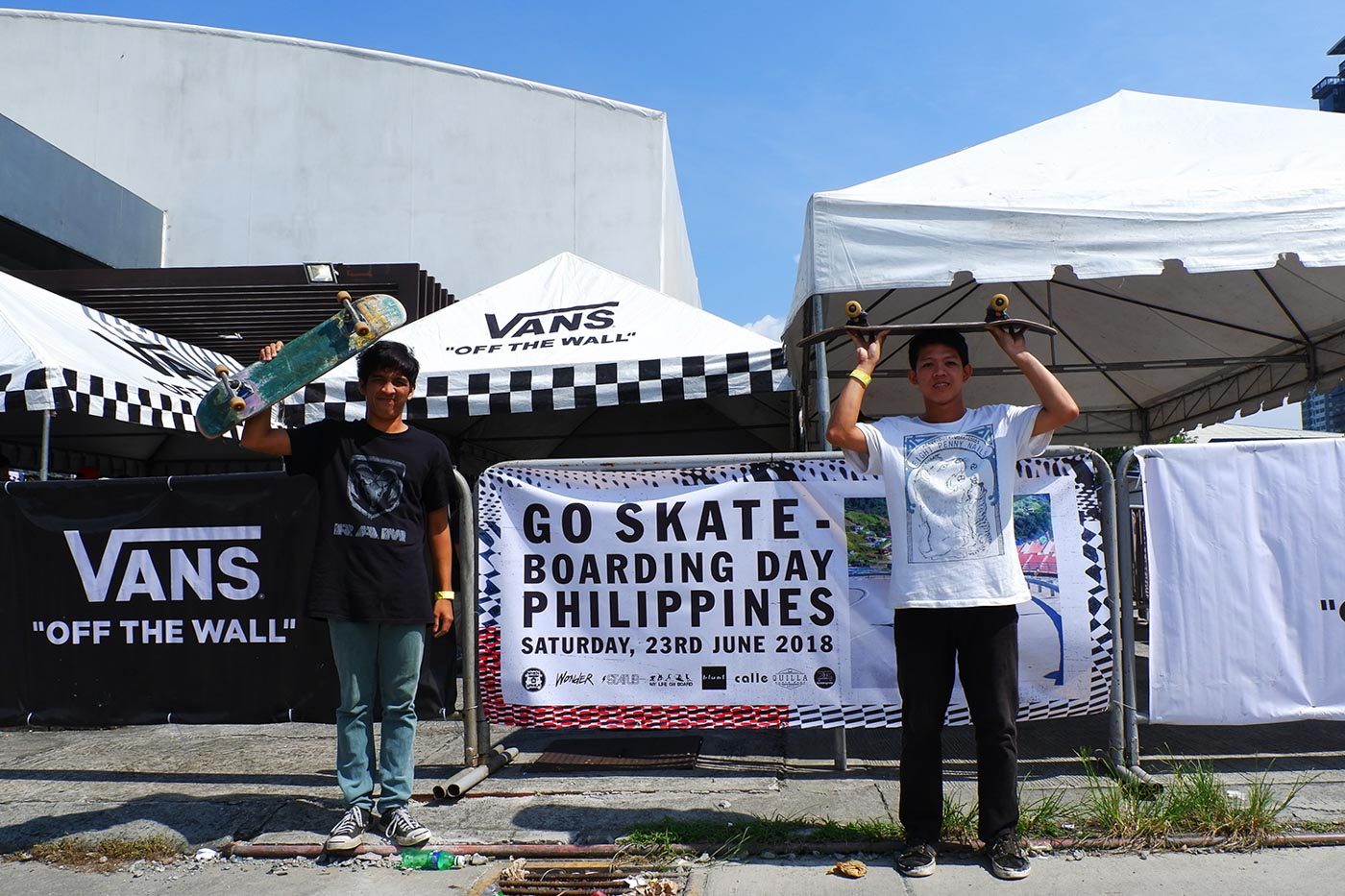 Skateboarding has long since been integral to the Vans branding. Since the 70s, skaters have favored their shoes for their rough-and-tumble durability and the now-iconic waffle sole; thick, “sticky” rubber perfect for defying the laws of physics on a skateboard.

Since then, Vans has sought to give back to the sport which has defined it – everything from providing local skate shops with support, sponsoring up-and-coming local riders, and holding events that bring the community together.

Go Skateboarding Day, held last Saturday, June 23, is the latest in such events, a full-day celebration that had registration lines starting bright and early at 7 in the morning and capped off in the late evening with performances by The Chongkeys and Go Smoke Mary. Vans had back-to-back events lined up for skaters and audiences alike, from a skate clinic for newbies hosted by Kalye Skate Shop, an hour of free skate at the indoor course, and a series of mini-competitions like the longest powerslide, the speed challenge, an obstacle race, a girls’ game of S.K.A.T.E., the longest ollie and the highest hippie jump. 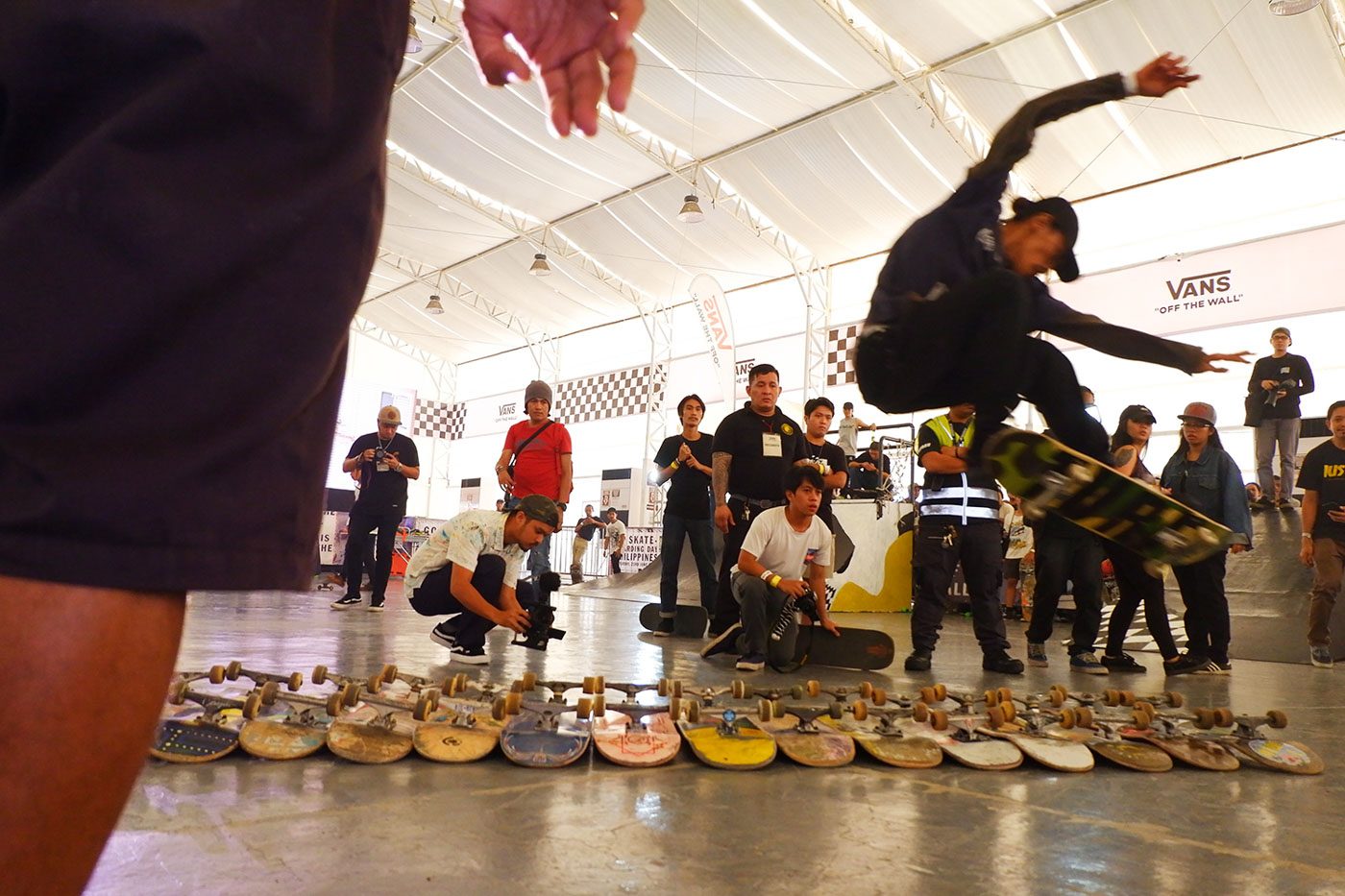 One of the highlights of the day was the old skool best trick contest, which called in faces familiar to those who have been part of the skate scene for decades. These riders showed the crowd a thing or two about riding, and that age and experience count for a lot when it comes to conquering a course. After all, if you can’t teach an old(er) dog new tricks, then they can at least show the younger pups a thing or two.

There was also the Off The Wall Ride Contest, which offered an impressive cash prize for the winner, but meant more when it came down to guts, glory, and taking on an obstacle that is as difficult and emblematic as the Vans Sidestripe itself. It was the Men’s Invitational, however, that had crowds jostling for a better view as some of the country’s best riders queued up to show off their best run. There’s not a lot that one can accomplish within 60 seconds, but these skaters weren’t just anyone. The participants gave the course their all as they filled their minute with every trick they had up their sleeves.

“There’s a lot of pressure when it comes to events like this,” says Moral, a 26-year-old rider for Vans who has been skating for fifteen years.

“Being here, win or lose, we feel like we’ve already won.”

Calvo, 29, has been skating for the last 15 years and been riding for Vans for the last five. He hails from Davao but flies in to Manila specifically for events like this, and confidently says, “One of the best things about skating is the skaters. We may speak different dialects but skating is a single language.” Kito Trinidad, a 23-year-old skater who came in all the way from Pampanga only to bag first place during the girls’ game of S.K.A.T.E., says that she’s never felt a difference between skating in her neighborhood and visiting Manila. “That’s why I love skateboarding. Everyone feels like family, like blood.”

Trinidad says that when she picked up a board five years ago, there were very few girls to idolize and that she learned how to skate from the boys. “Nakaka-proud ngayon na madami nang babae ang nagseskate sa Philippines. Sana makita ng mga bago na kayang-kaya nila. Lakas ng loob at tiwala lang.” (It makes me proud to see that there are more girls skating here in the Philippines. I hope the newbies see that they can do it. All they need is courage and trust.)

“These events are rare in the Philippines,” says Chris Ping Hurich, 30, another Vans rider who has been skating for 17 years. “Vans is very committed to holding events like this, not just in Manila but also in Visayas and Mindanao. It’s a melting pot — you learn from everybody. Go Skateboarding Day is great for bringing everybody together.” “It’s is a great way to meet people and learn from them,” adds Moral, also from Davao, who flew in to Manila with his family in tow. “If there’s one thing people should learn from picking up a board and riding, it’s to value community.”

Four wheels and a piece of wood

There’s a lot to be learned from a sport where near-collisions are greeted with an embrace.

“I hope the general public sees and understands skateboarding as more than just what they think it is,” says Calvo. “More education is needed because some people still see skateboarding as risky, or that skateboarders are a nuisance.” “I hope the government gives more attention to the skate community,” adds Moral.

“We need more skateparks.” Hurich elucidates, “It gives kids something to do. Skating gets kids off the streets, gives them a venue where they can grow and be around good people instead of getting into vices.” “Skateboarding is all about defying limitations,” Hurich chimes in. “Whether they’re your own or the ones that society has set for you, skating teaches you to push past them. It’s all about persistence and determination.” It will be interesting to see how Go Skateboarding Day evolves next year. Until then, these skaters will be spreading the stoke and holding the banner high for their sport. – Rappler.com