Freedom, equality, and all the colors of the rainbow at Metro Manila Pride 2018 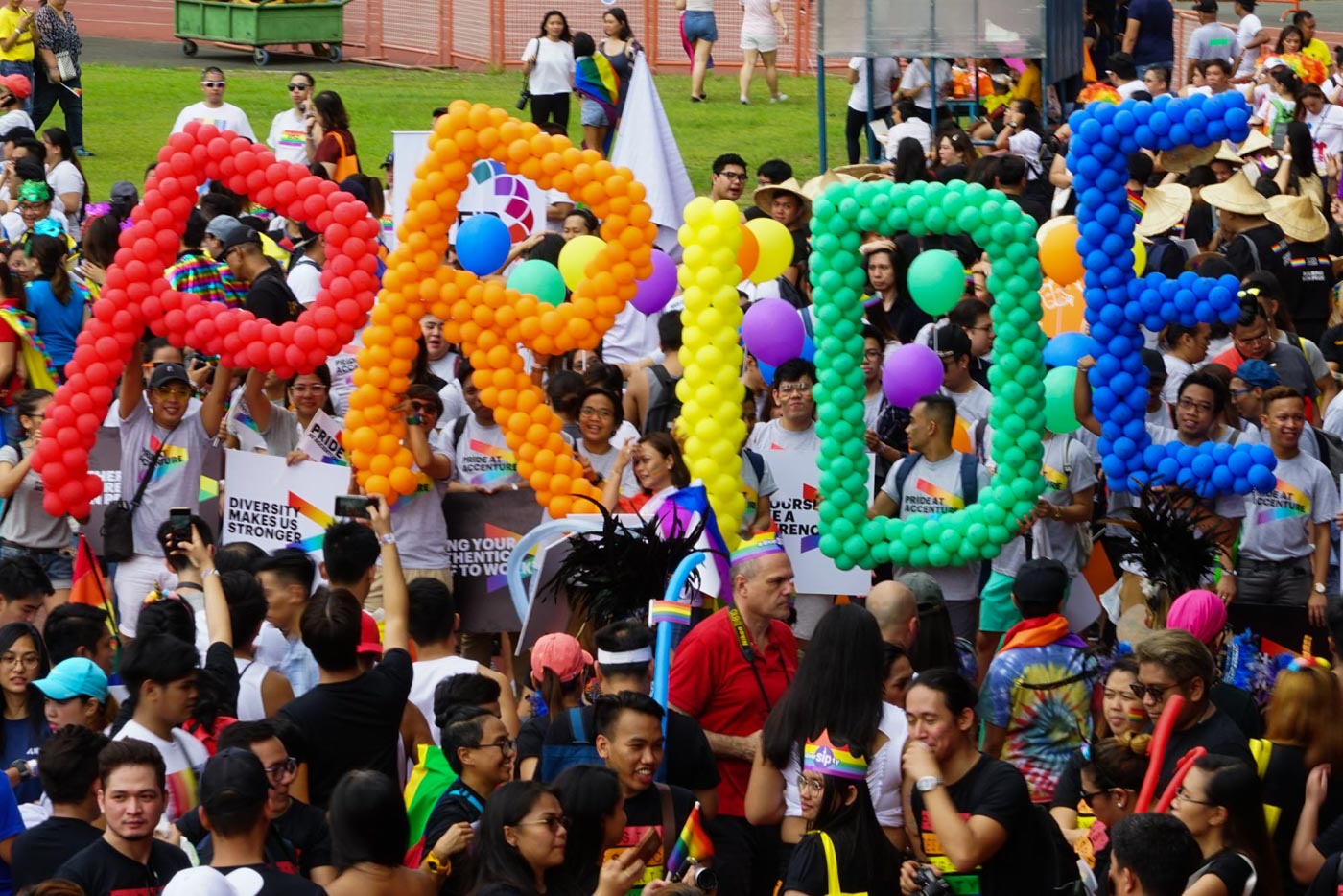 MANILA, Philippines – The LGBT community in Metro Manila ended their celebration of Pride Month with a burst of color as they headed to the Marikina Sports Complex on June 30 for Pride March 2018 – just a few days after the Supreme Court concluded oral arguments on same-sex marriage.

In a country where conservative Catholics are the majority, finding a safe space to express themselves isn’t always easy for LGBT Filipinos. The Metro Manila Pride March, which has happened every year since 1994, has since become that safe space, but more than that, a platform for members of the LGBT community to thrive.

The event opened as early as 12 nn, with a Pride Fair featuring booths that sold everything from Pride stickers, to LGBT literature, to sex toys, to accessories handmade by an LGBT youth group.

At the same time, a roving marriage booth allowed same-sex couples to declare their love and commitment to one another. 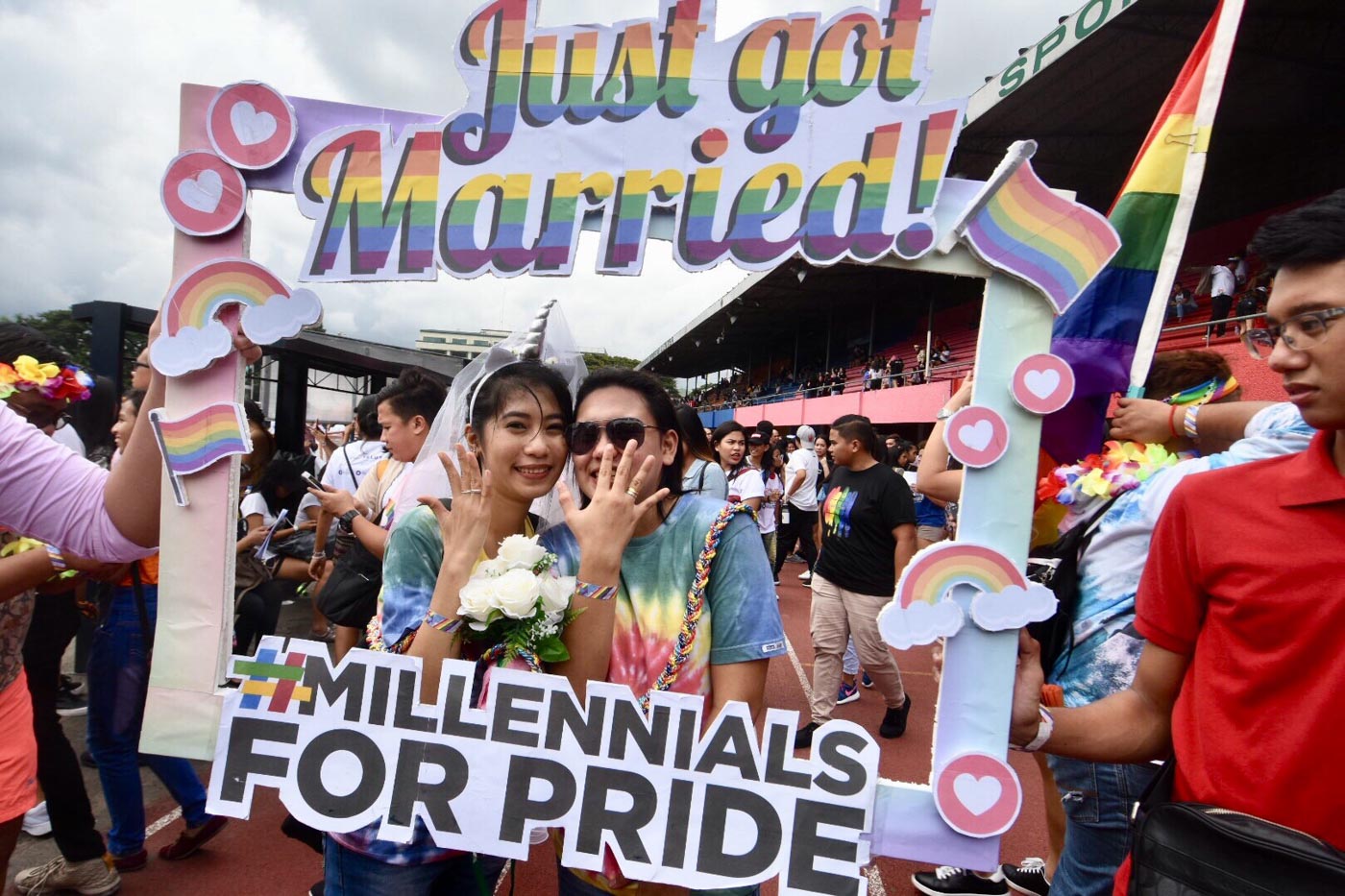 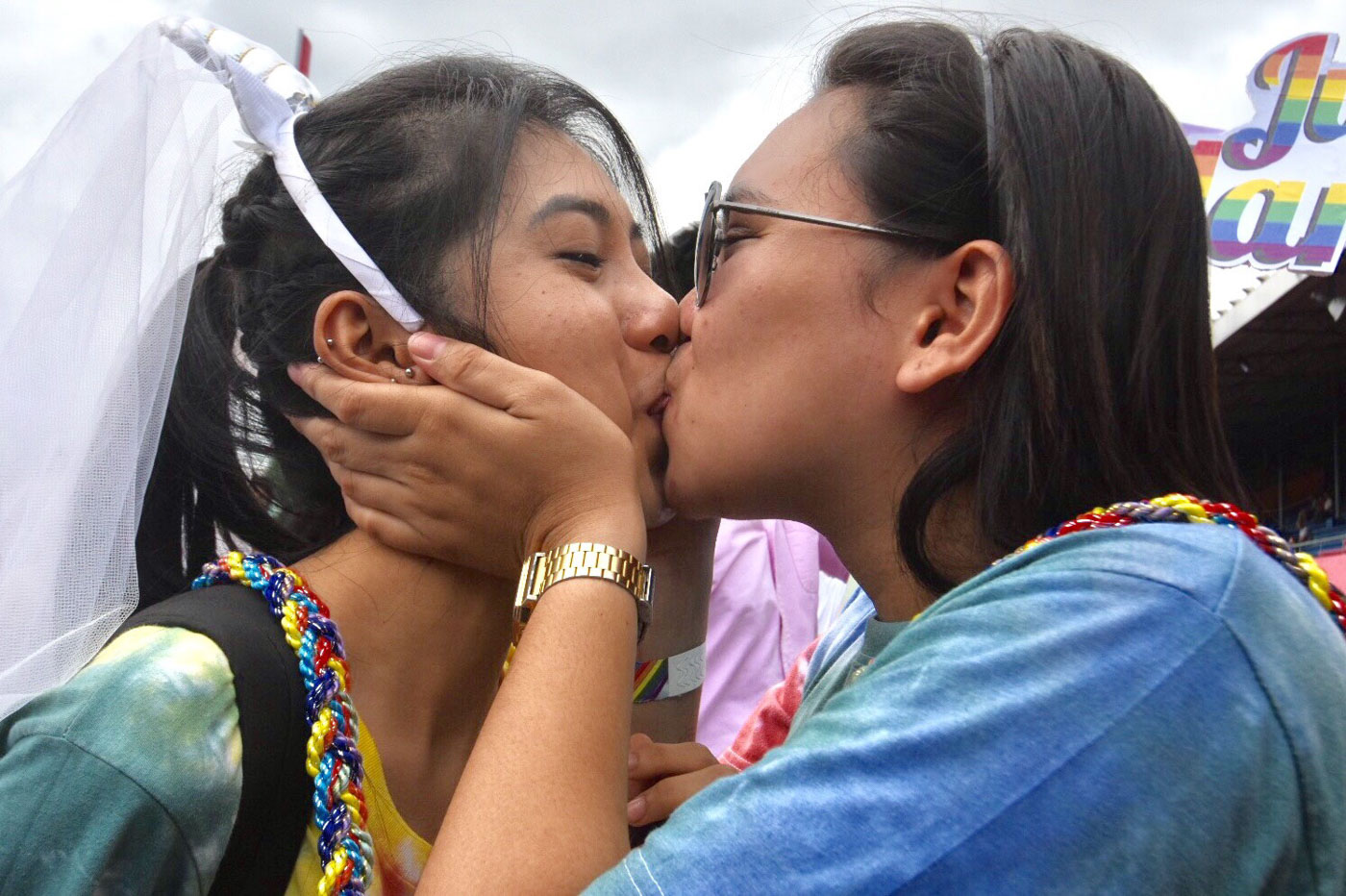 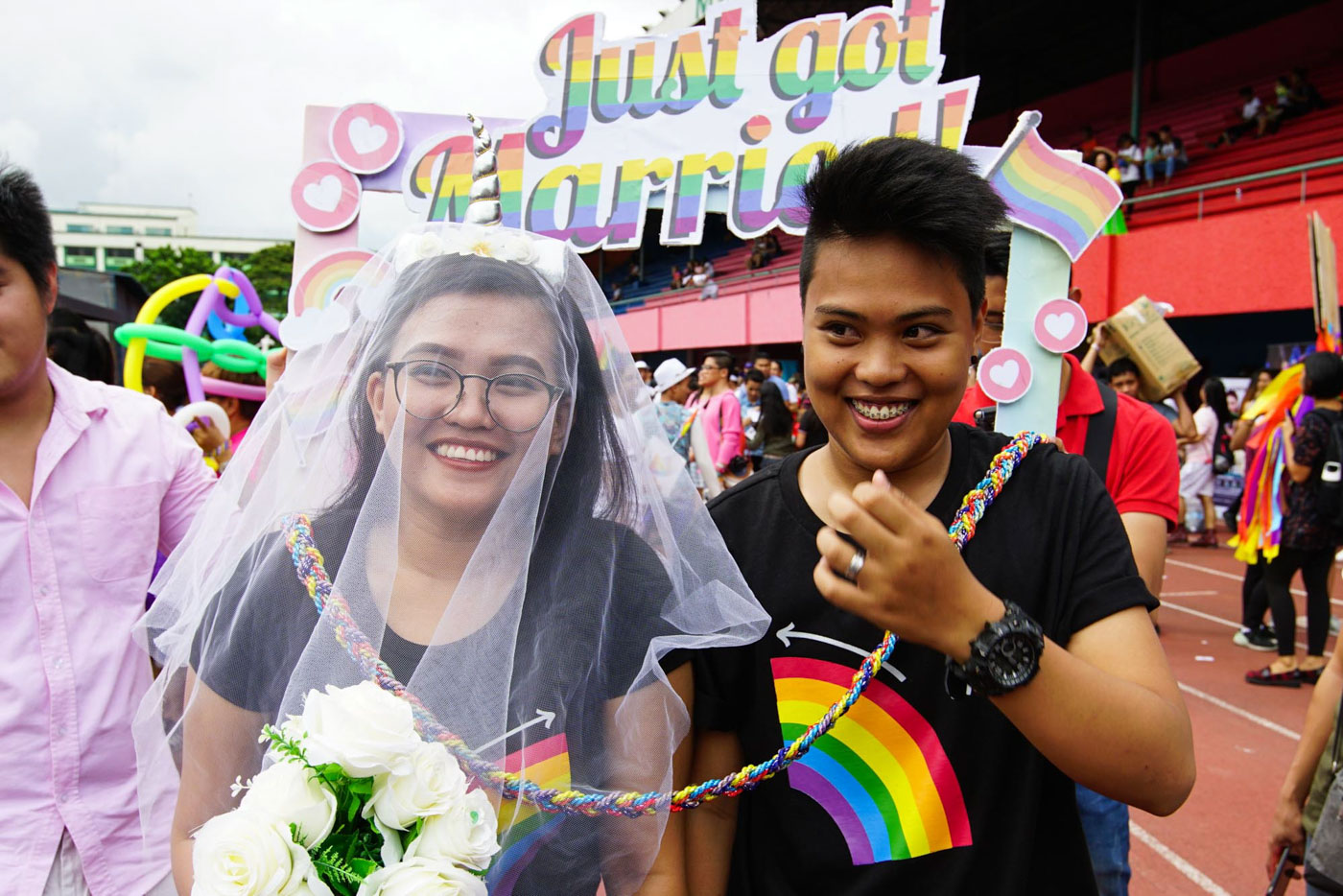 A pre-march program in the early afternoon saw  performances that took the audience through the whole spectrum of emotions: from feeling kilig at listening to all-bear acapella group The Bearytones’ version of “Akin Ka Nalang,” to feeling one with the crowd while singing along to Ja Quintana’s cover of “Come Together,” to feeling empowered by Dee Dee Marie Holiday’s passionate lipsynch of “This is Me.”

The Bearytones take the stage with a performance of "Akin Ka Nalang" (notice the sign intepreter's smooth moves!) pic.twitter.com/xPbXc8o7vm 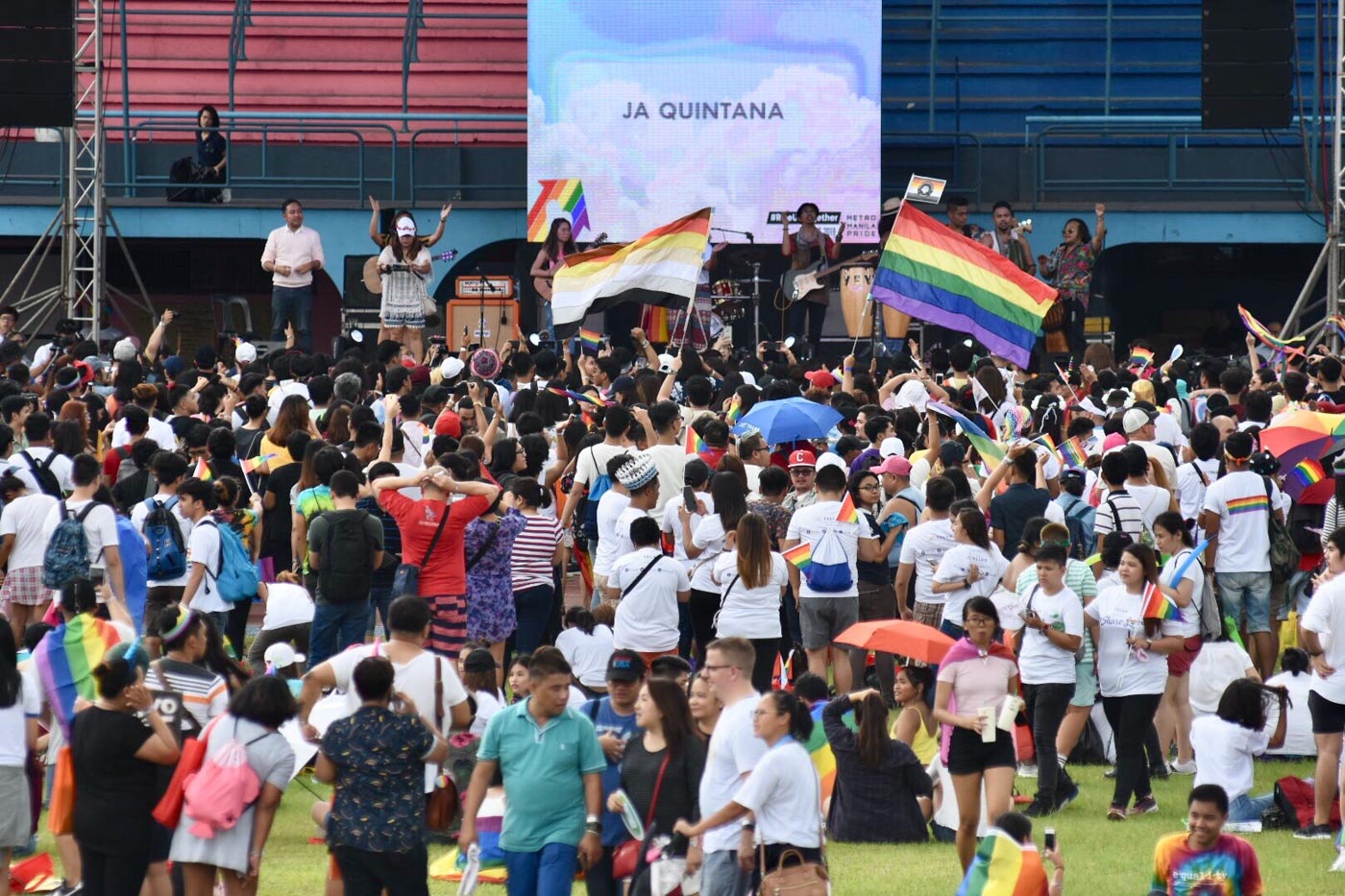 Speeches from key guests followed, including Marikina Mayor Marcelino Teodoro, and a representative from the Lagablab Network, whose speech fired up the crowd right in time for the Pride March itself. 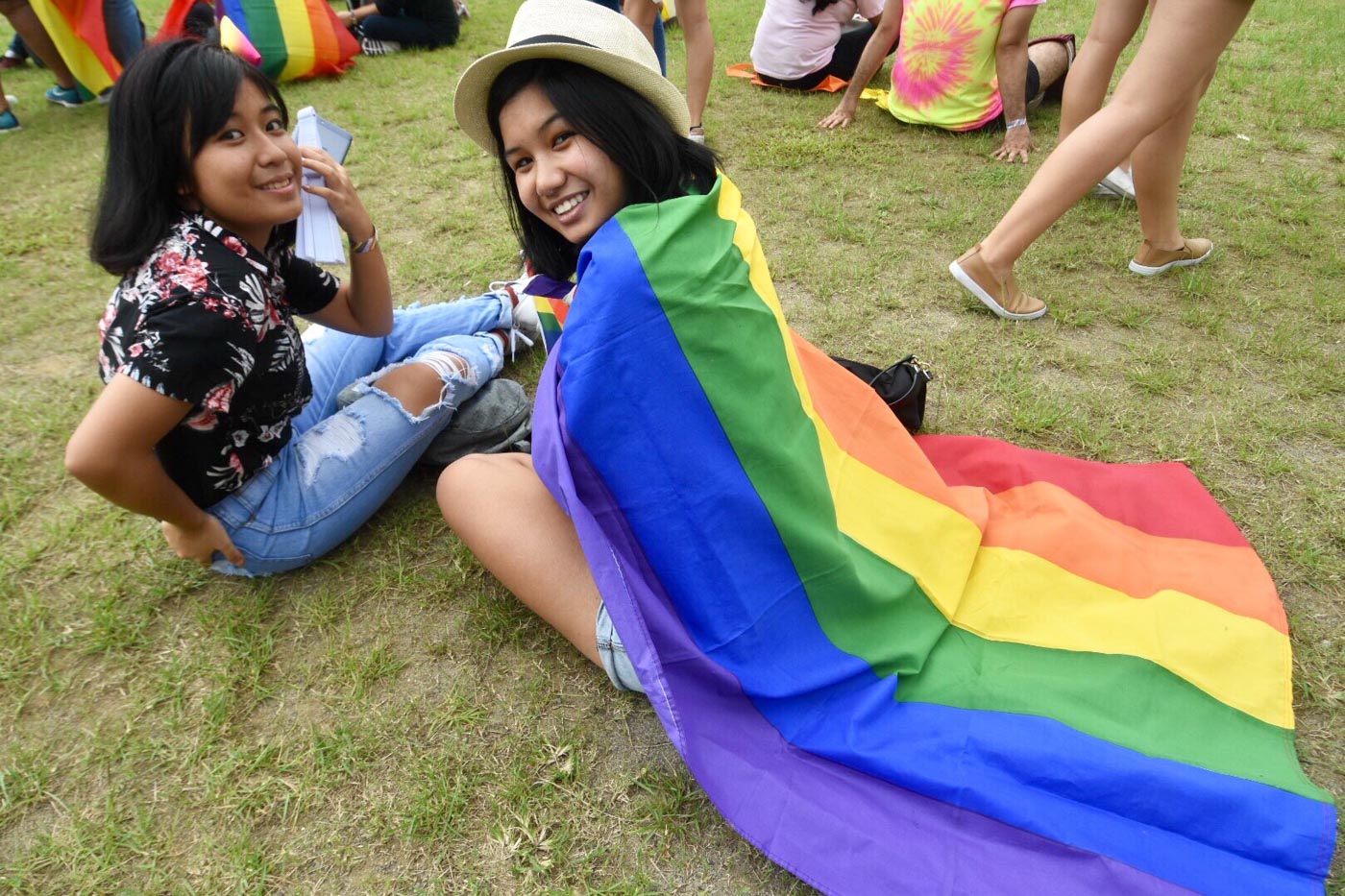 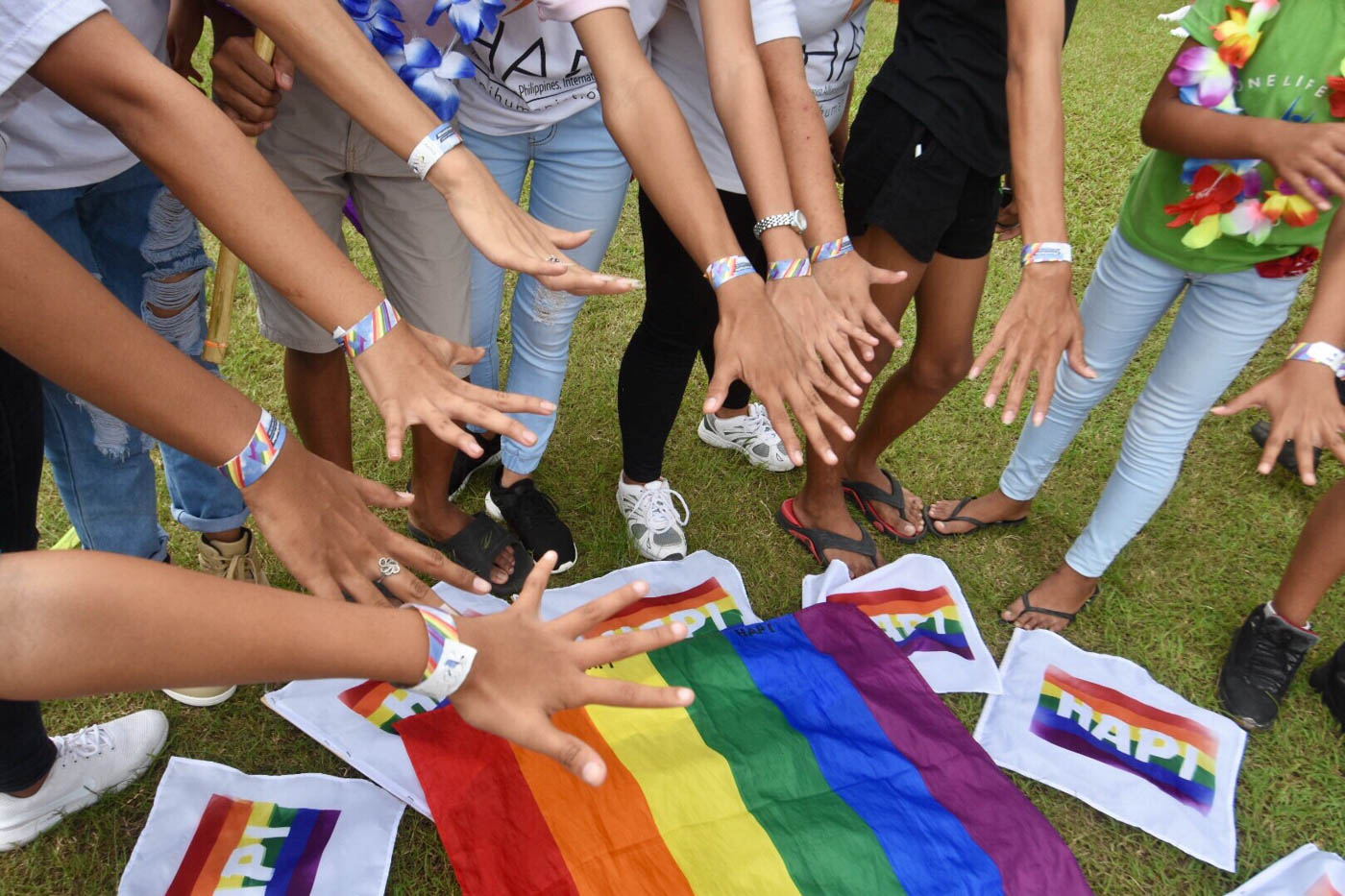 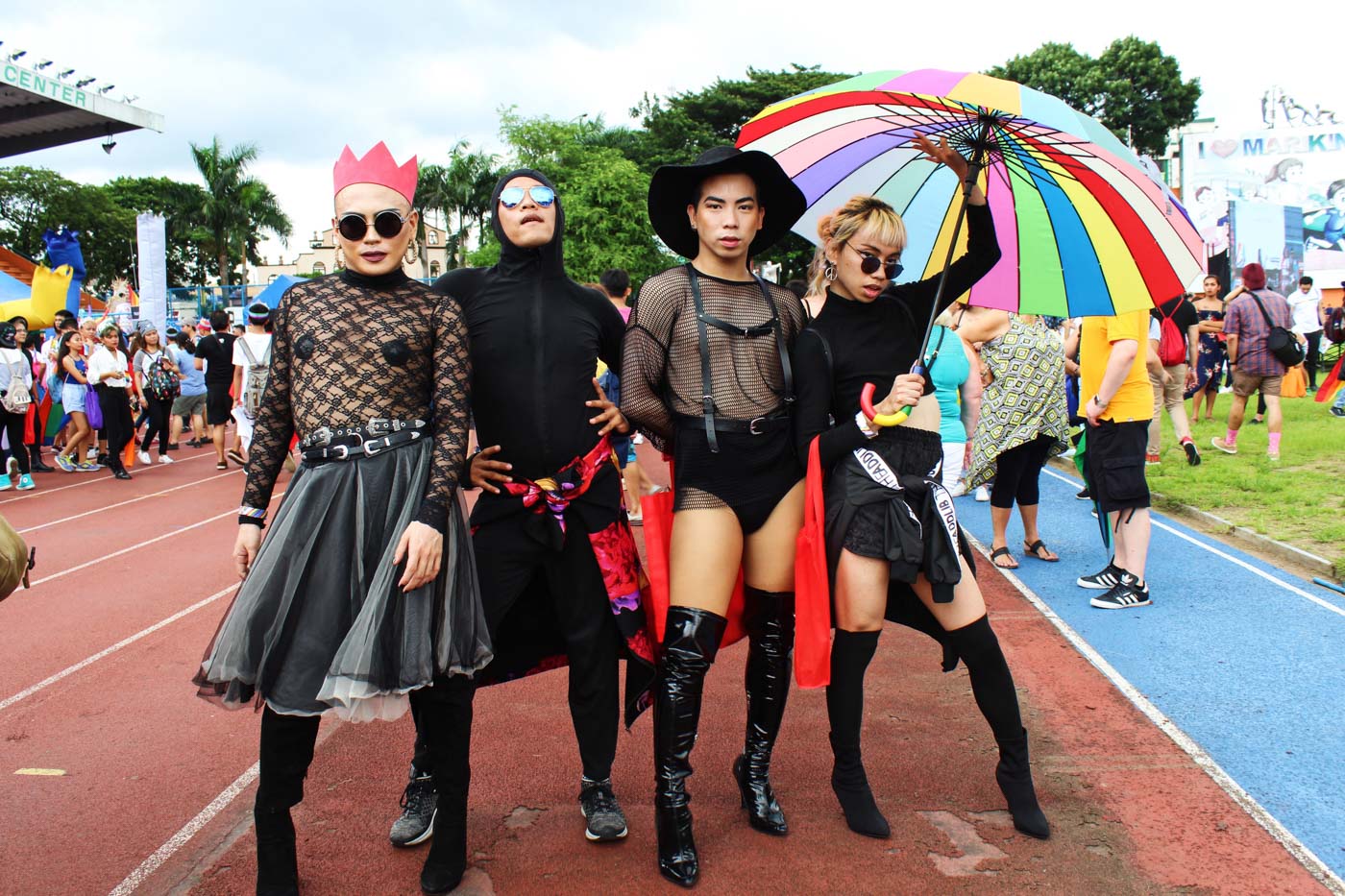 Before the March started, the hosts asked everyone to wave their rainbow flags, balloons, and umbrellas in the air freely. 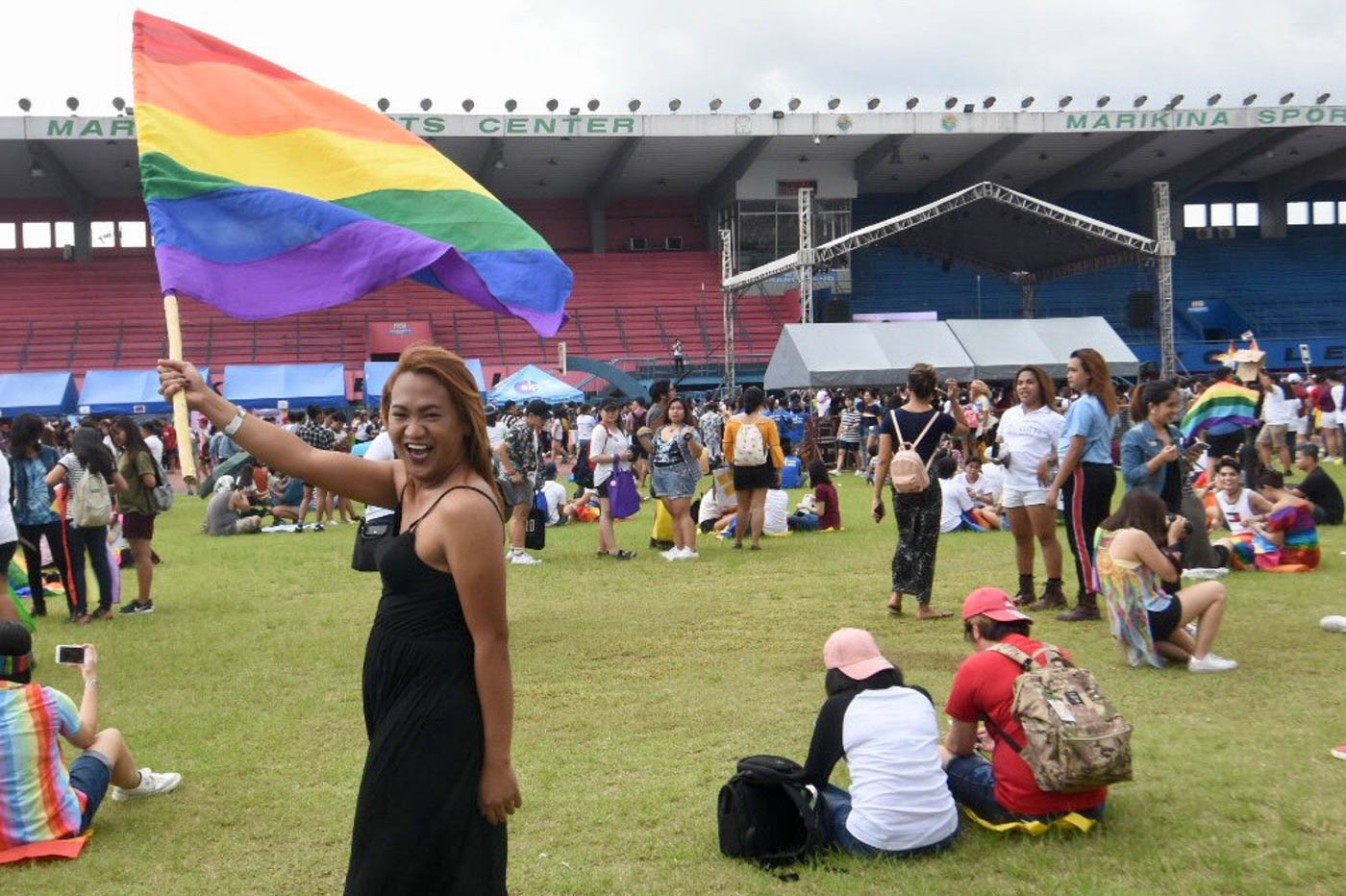 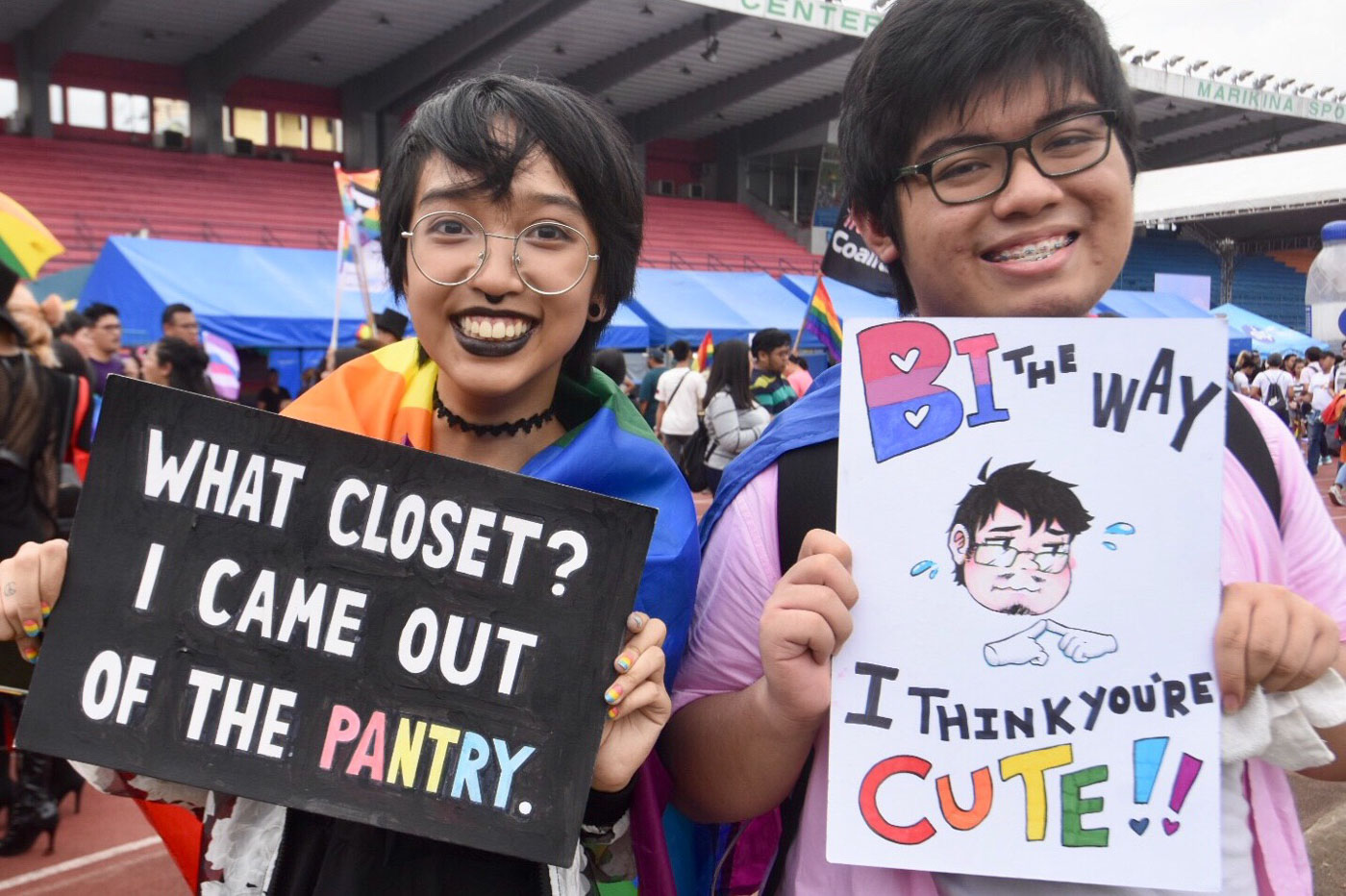 With such a huge crowd (Pride coordinator Nikki Castillo estimates 15,000 attendees – double last year’s number), it took a while to get everyone organized for the parade itself, but the downtime only meant an impromptu dance party for the community.

With a playlist of songs from Carly Rae Jepsen and Ariana Grande (of course), as well as Blackpink and Whitney Houston, people from the crowd broke out in dance – some moves perfectly choreographed, other moves charmingly awkward, but all done in the spirit of having a good time. 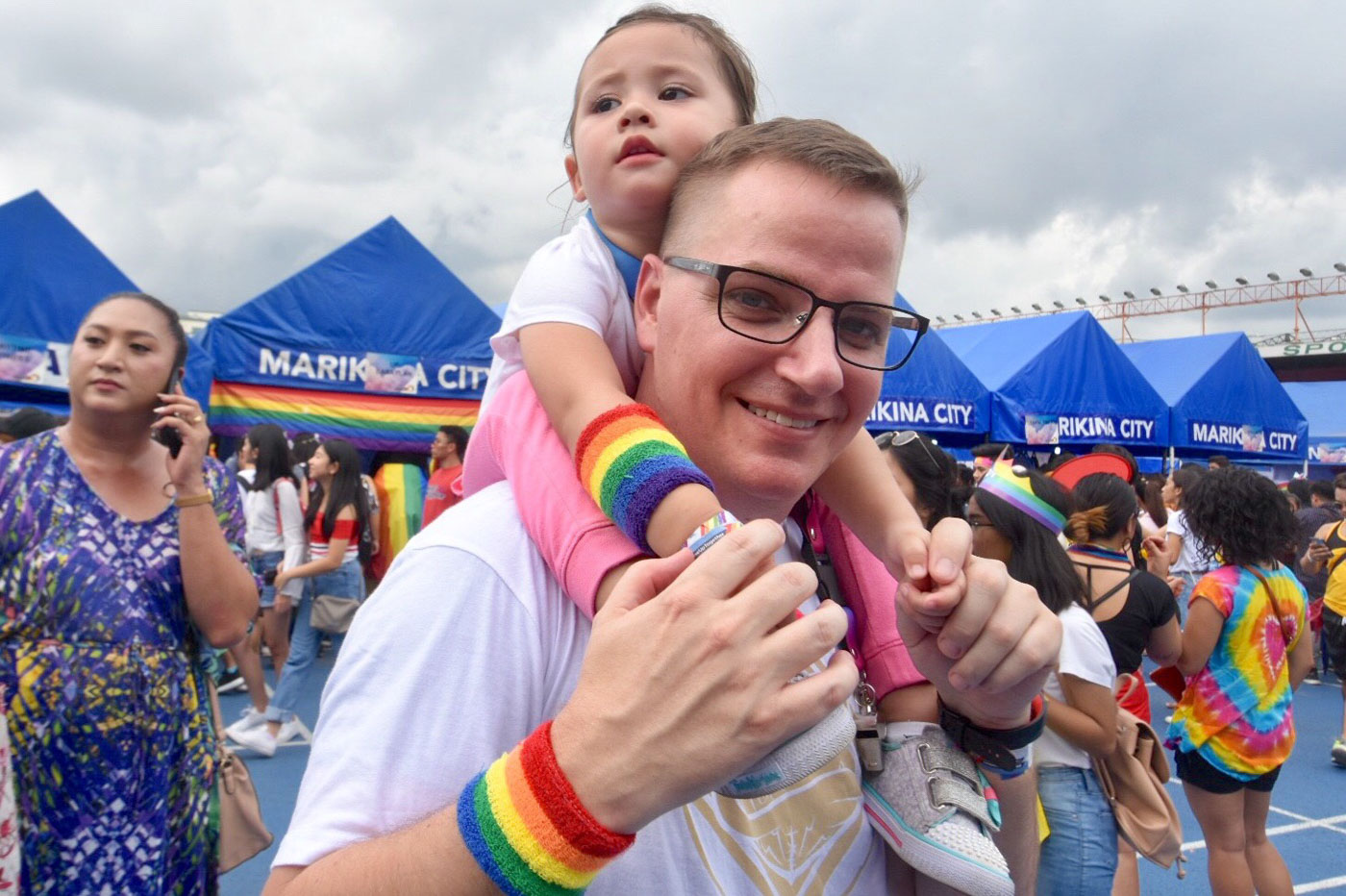 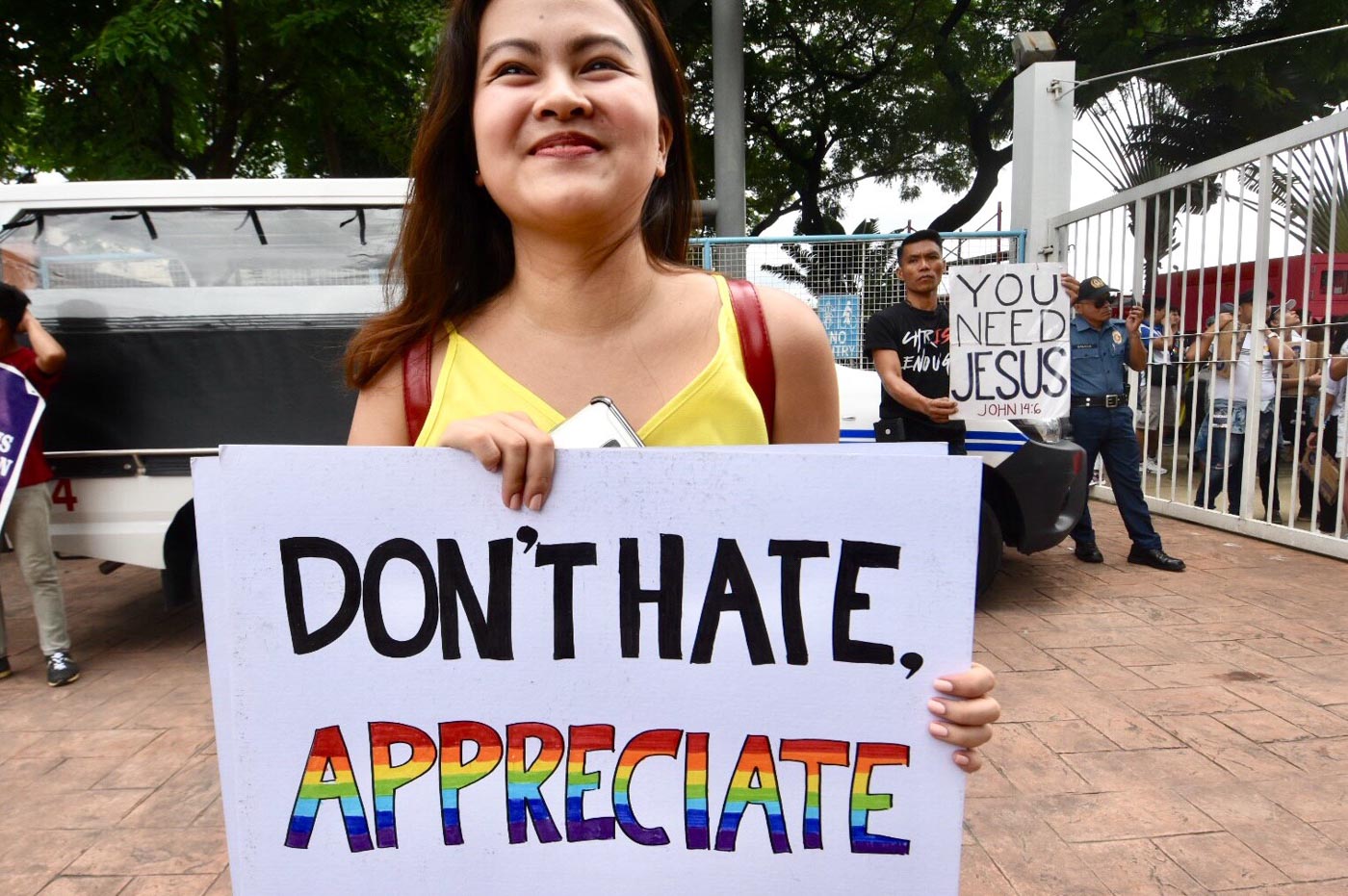 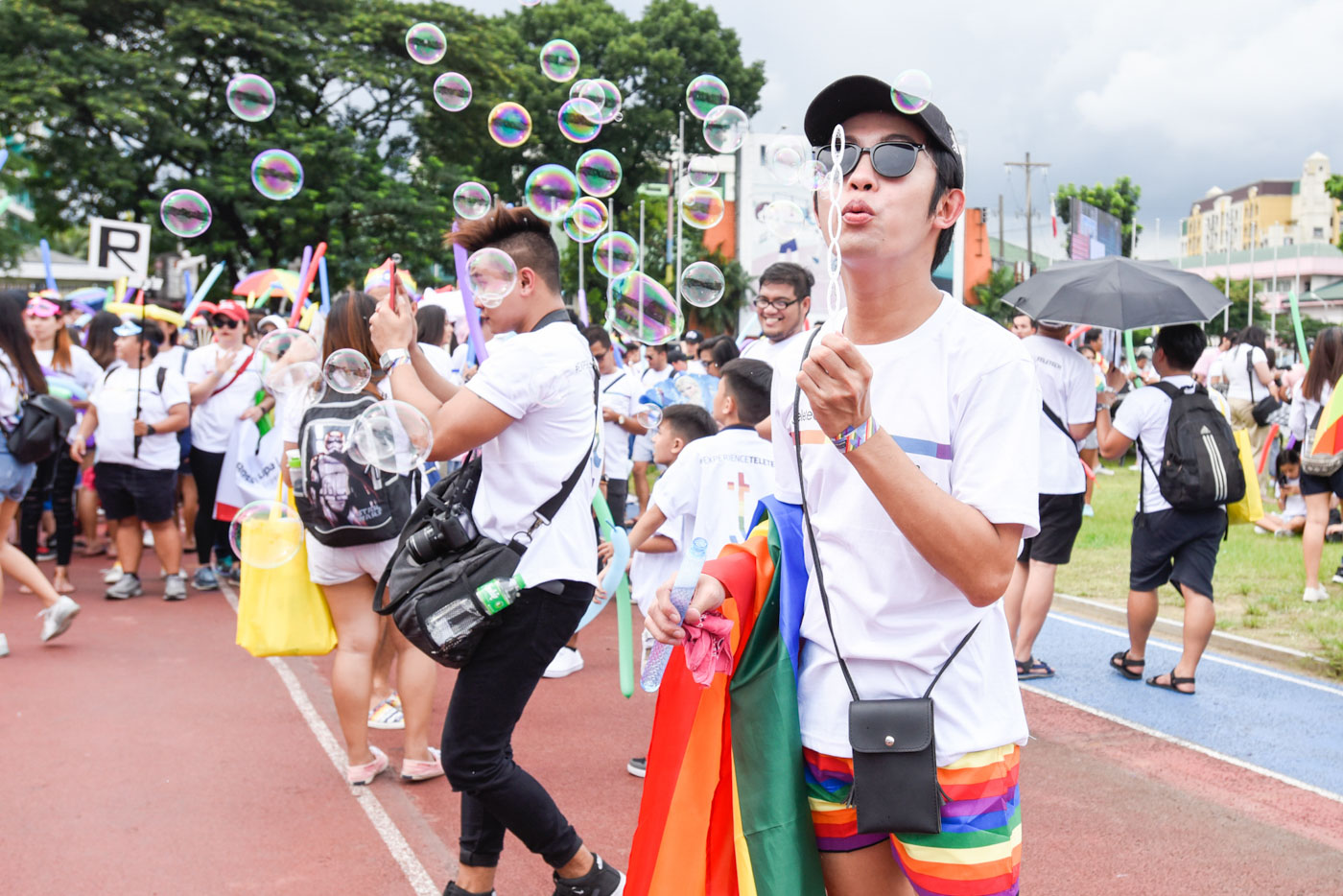 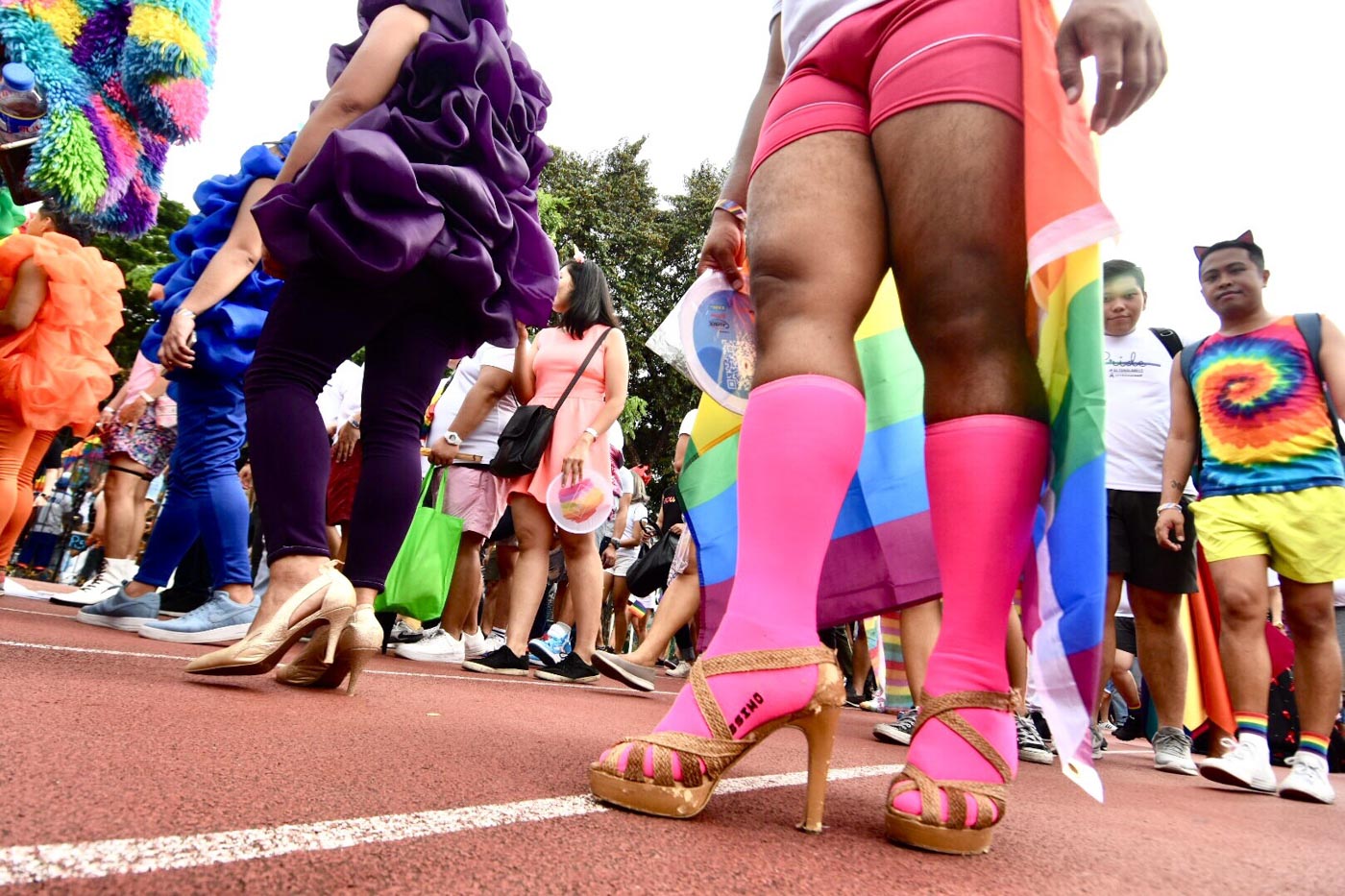 Nikki told Rappler that this year’s Pride March theme is a jump off from last year’s.

“Here Together [the 2017 theme] was more like a positive call of solidarity for everybody to come in, allies, LGBTQIA+ people, families, friends, and to just gather and make sure you’re in the company of each other, and to know that yes, we’re standing here in solidarity with each other,” she said. “This year naman, since we’re all gathered here together, there needs to be movement.”

She explained that “rising up” means doing more for the community: from pushing for policies, to becoming more intersectional. 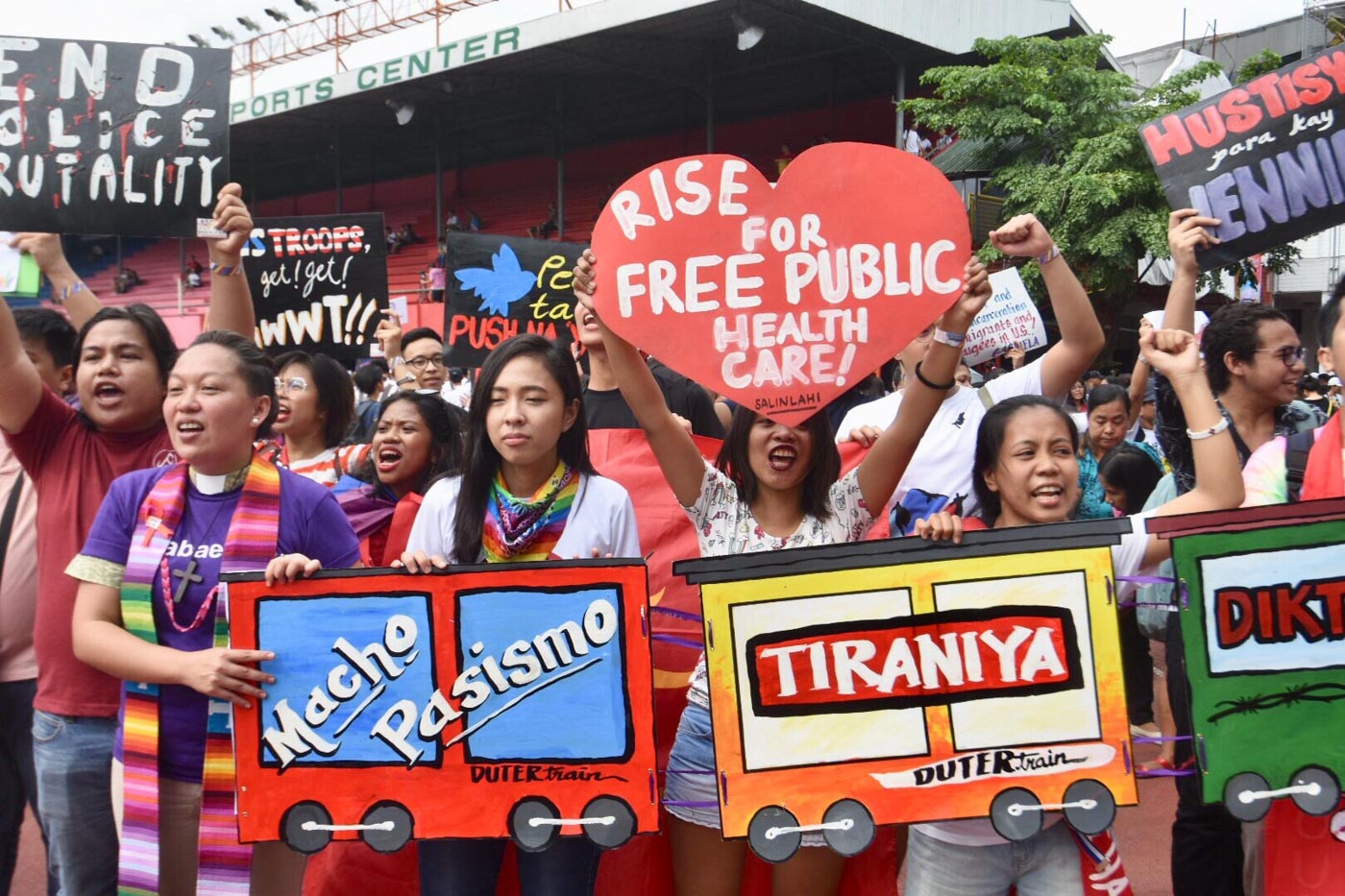 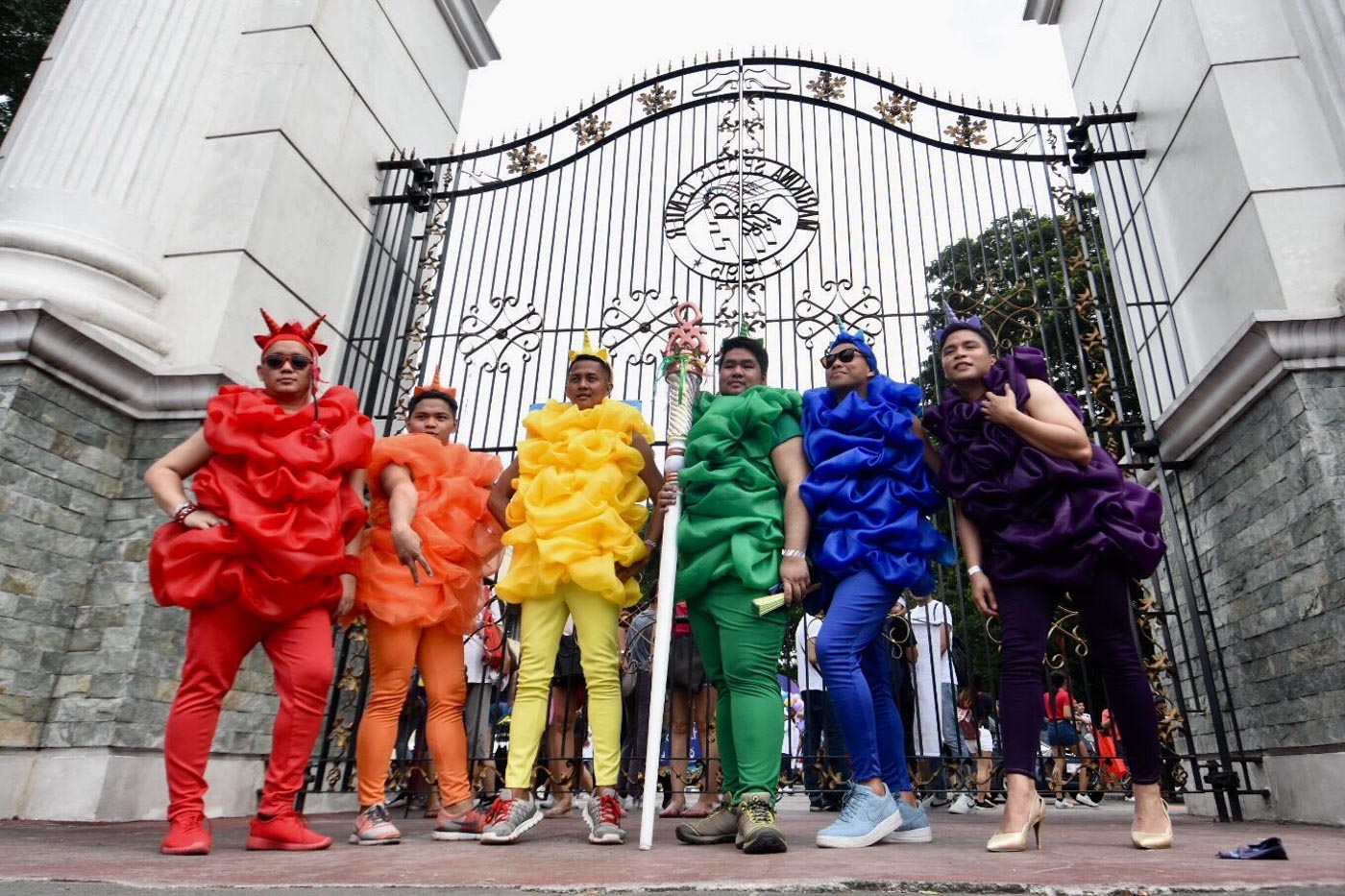 “Rise Up Together, our thrust with this is we want the communities to start pushing for policies that actually talk about our rights. Aside from that, one of our thrusts also is to be more intersectional in our activism and to teach each other how to become better activists, advocates in the community, and to be better allies to each other,” Nikki said.

By the time the pride march started, anti-LGBT protesters citing the bible were in full take-down mode, but the marchers held their heads high and walked on, responding with the occasional sassy retort, or, more often, “Mahal namin kayo (we love you).” 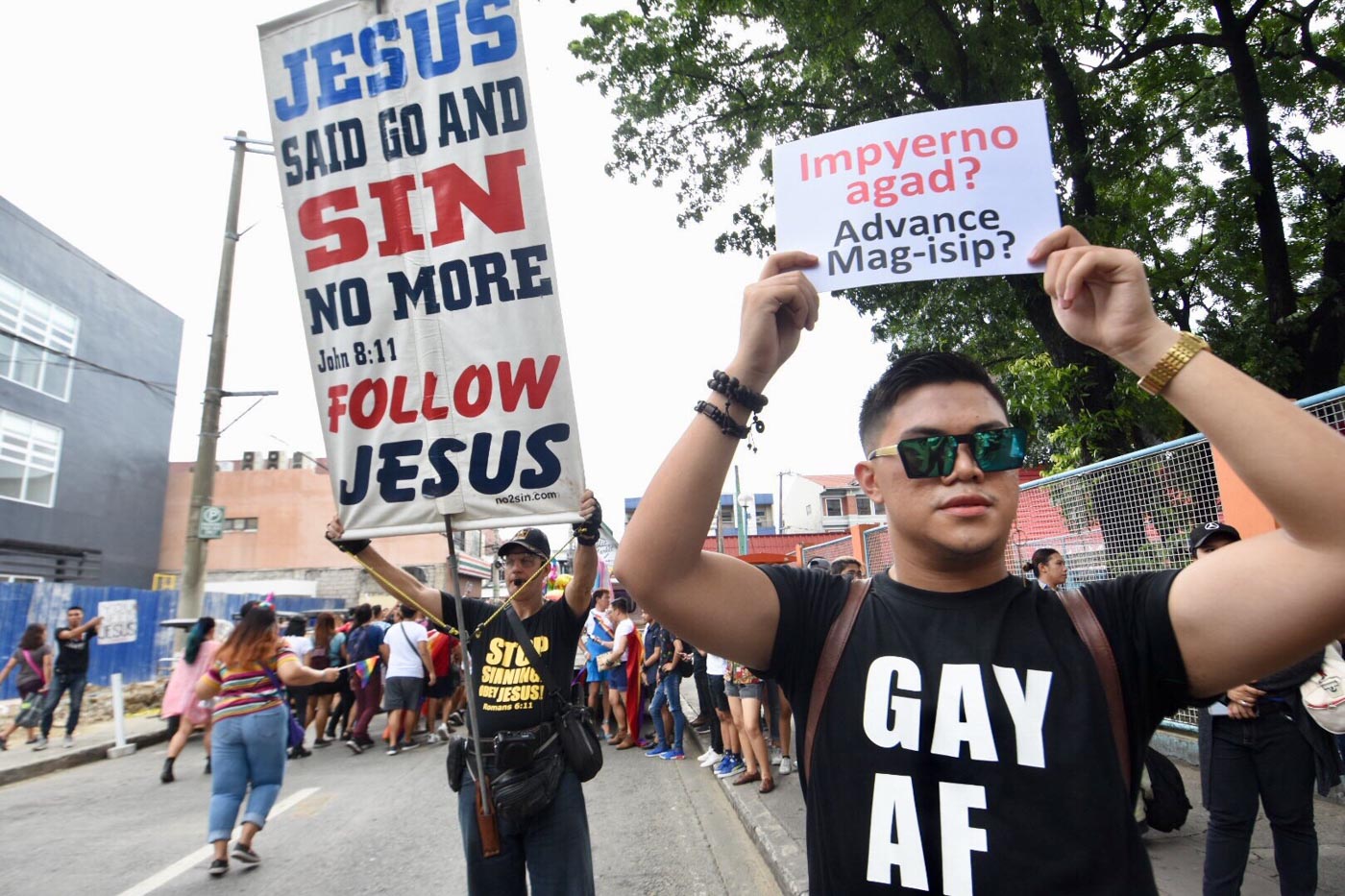 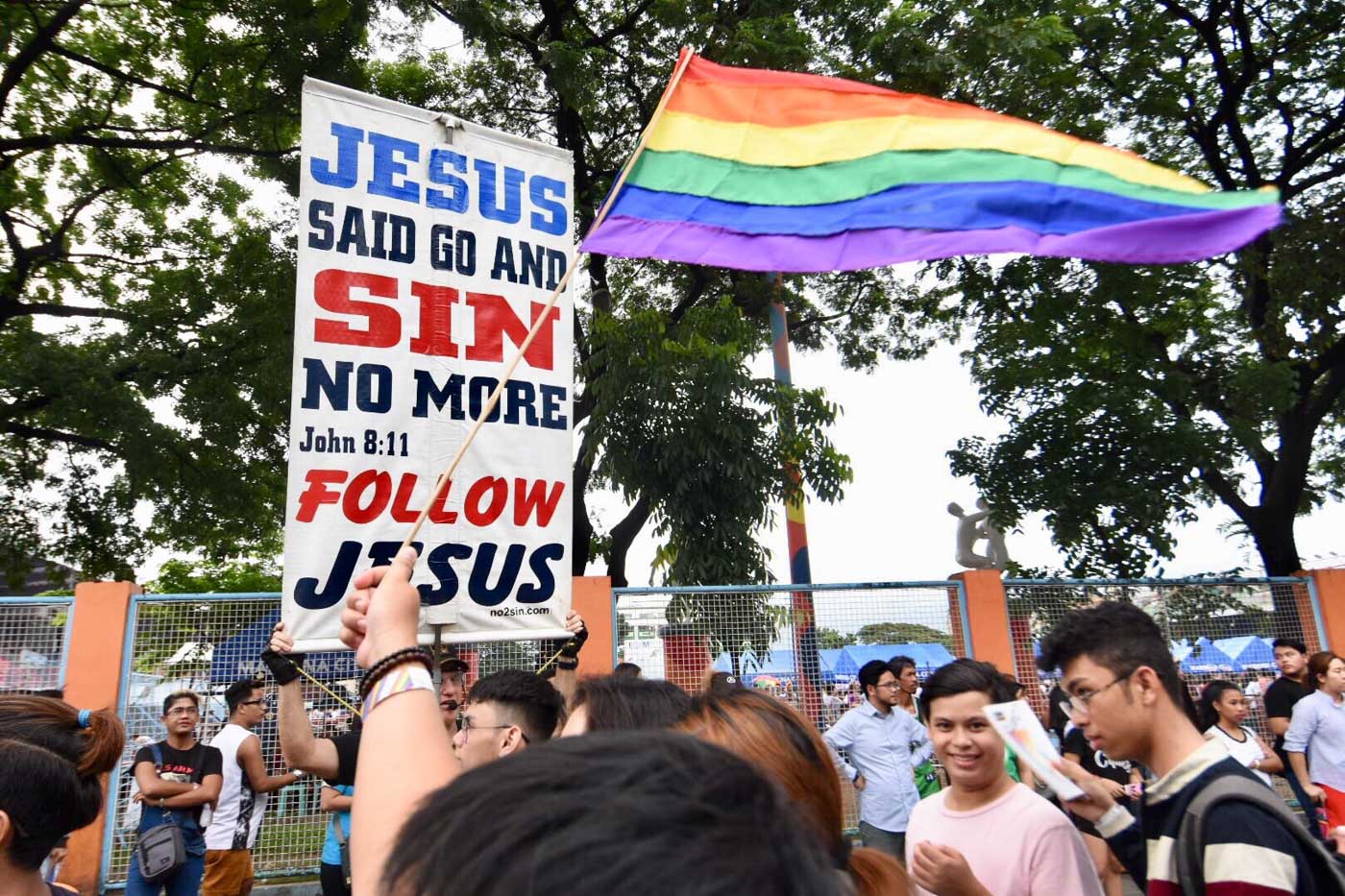 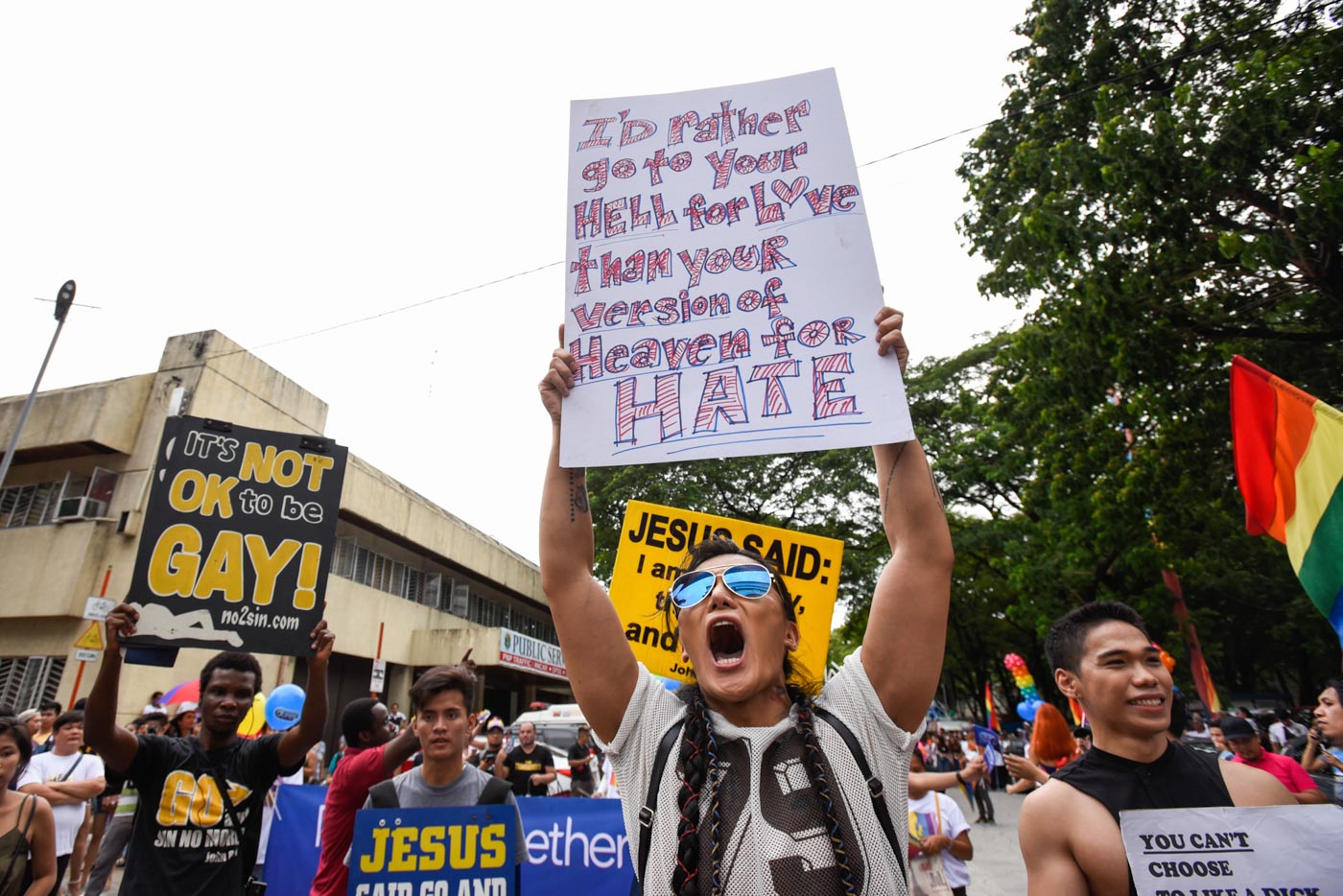 A momentary downpour only made all the rainbow colors shine brighter by contrast – and groups from all across the spectrum – lesbian, gay, bisexual, transgender, everyone else in between, and their allies (including celebrities like Iza Calzado and Cai Cortez) were able to wave their flags with, well, pride. 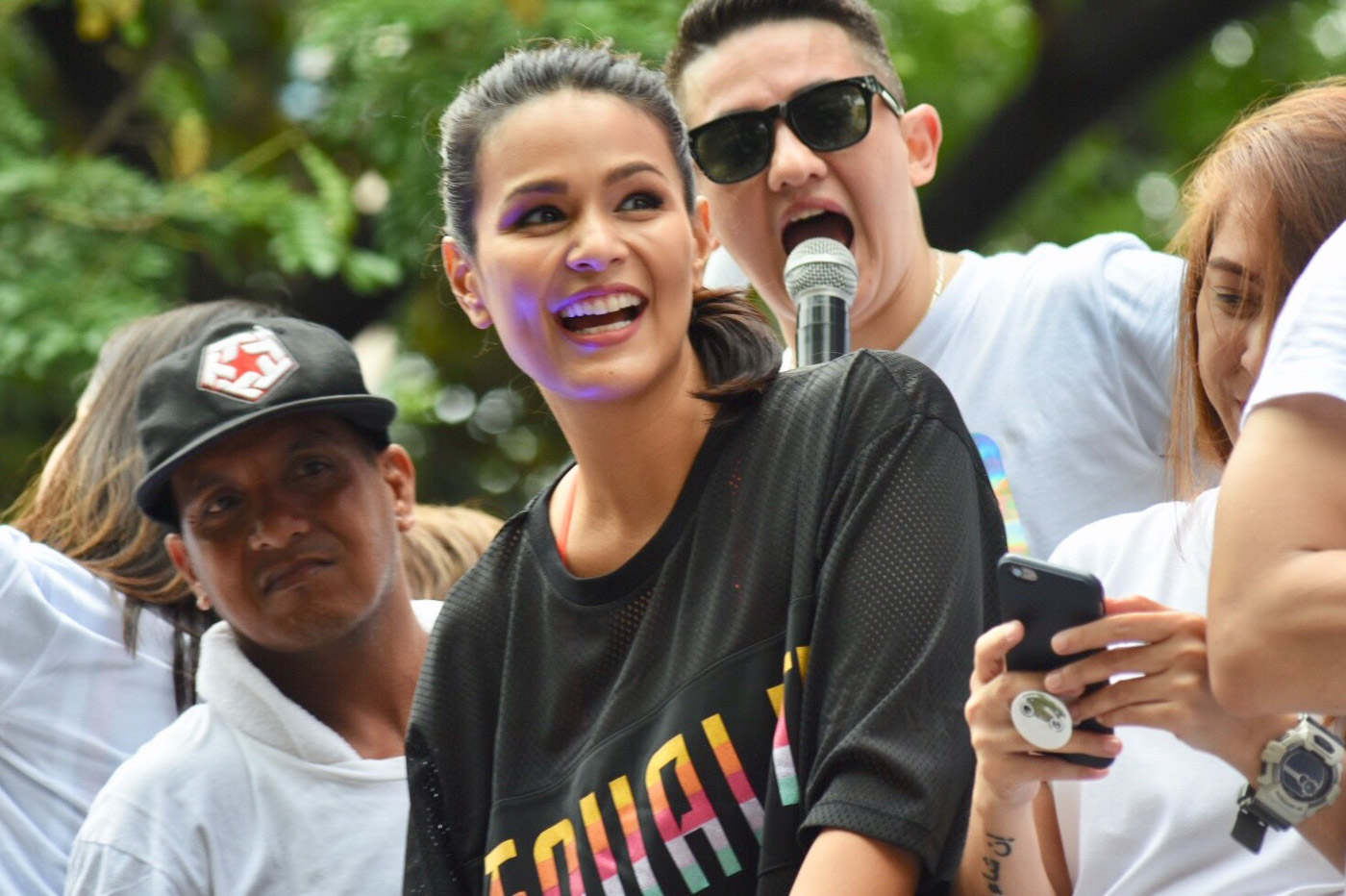 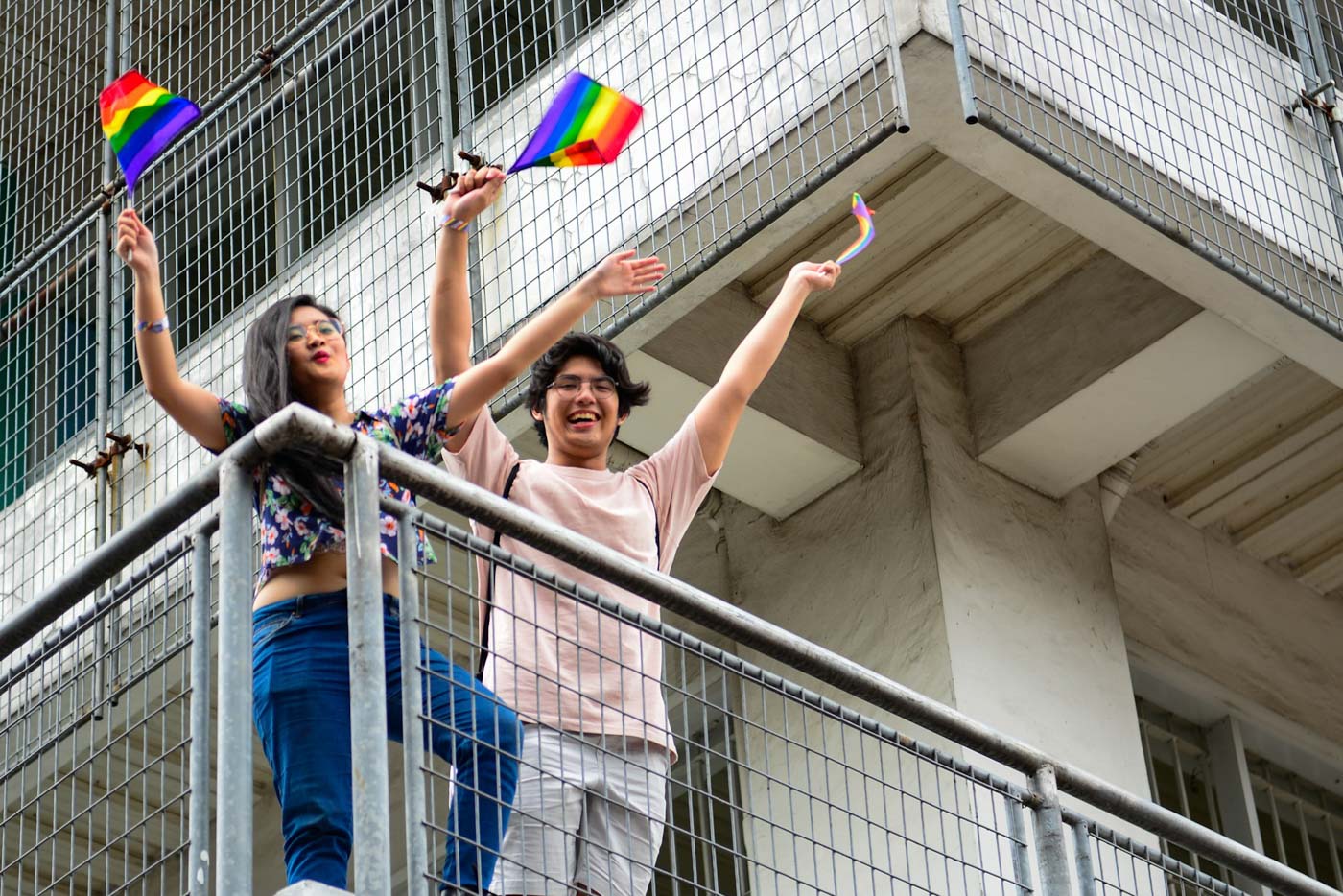 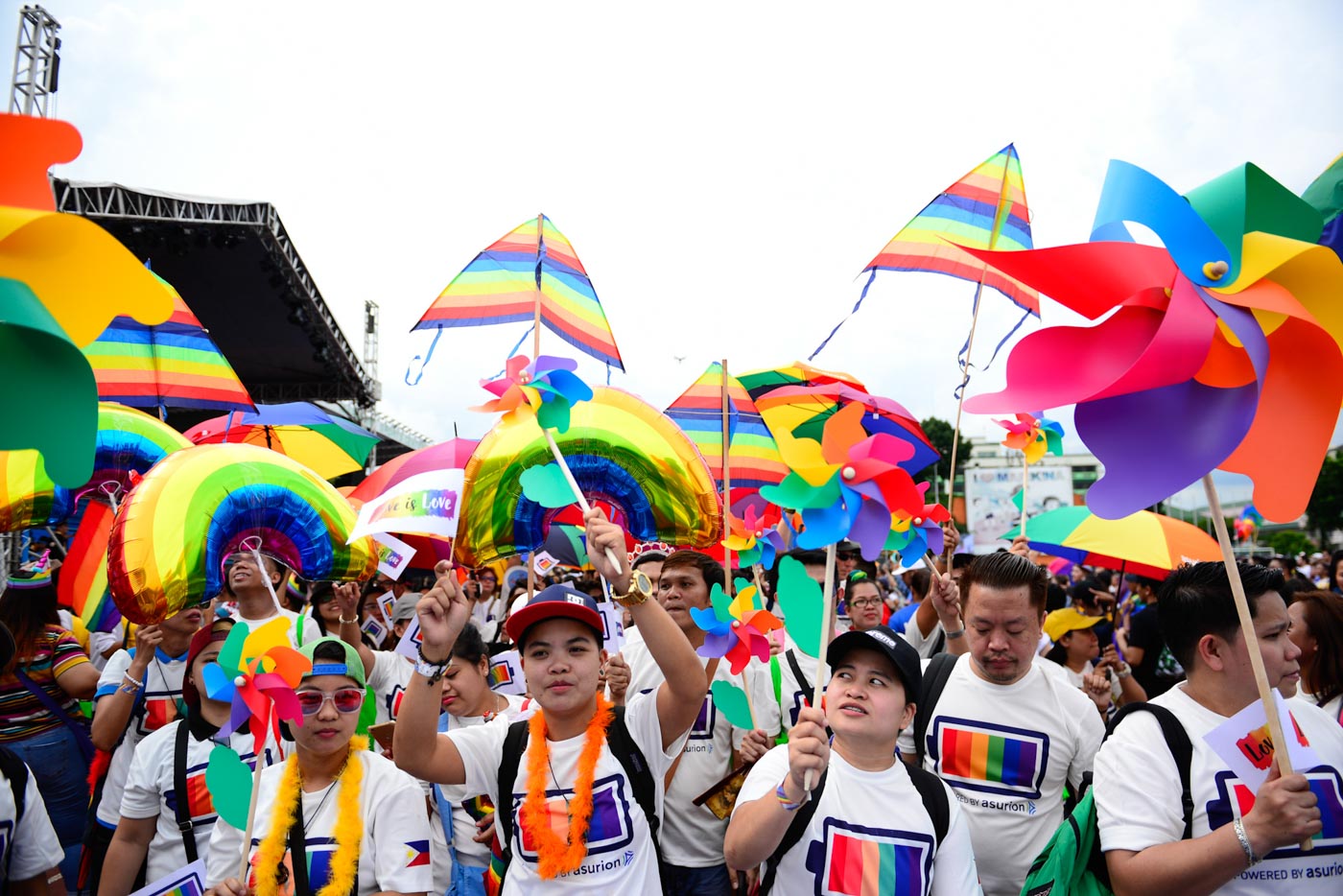 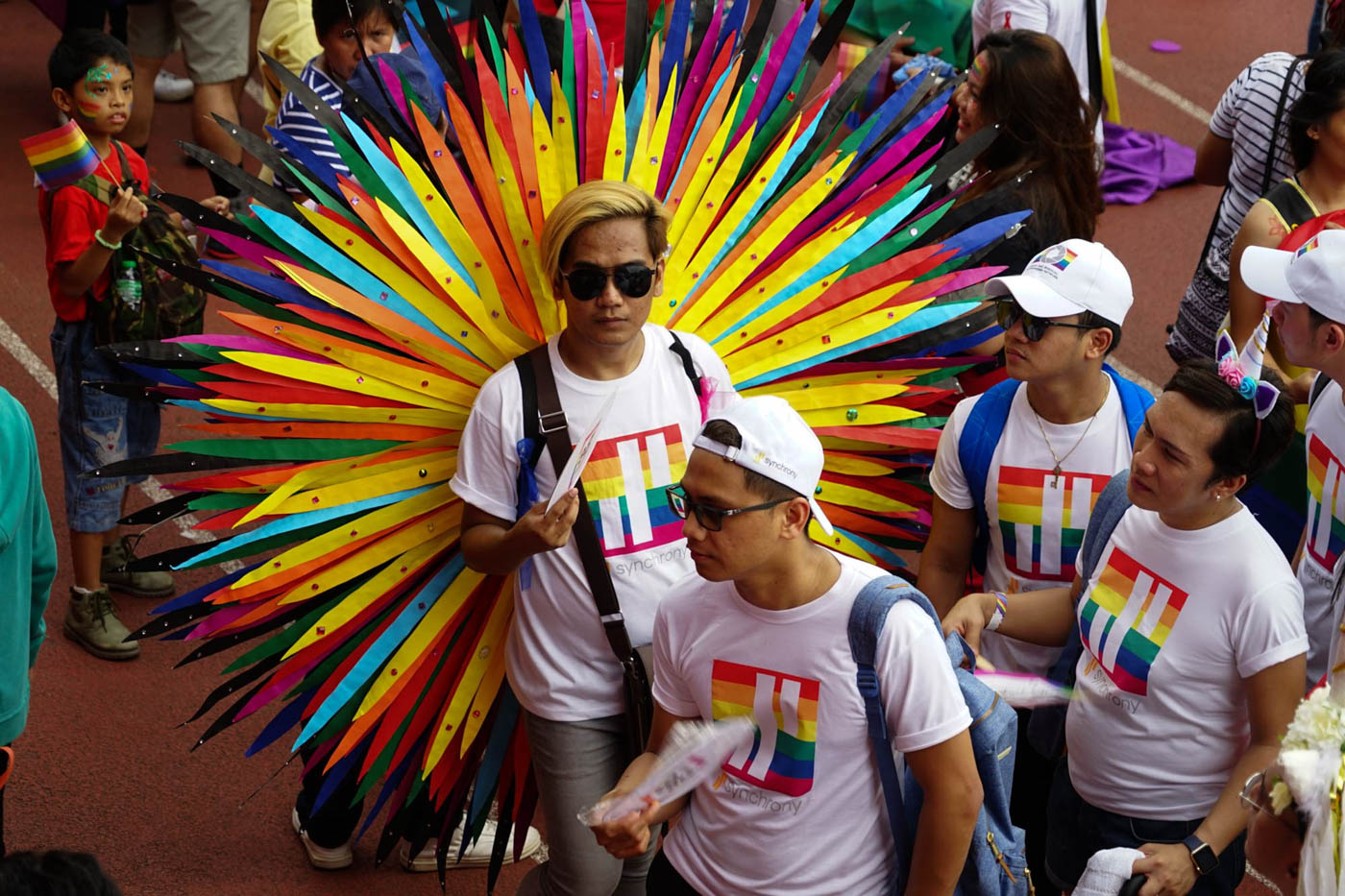 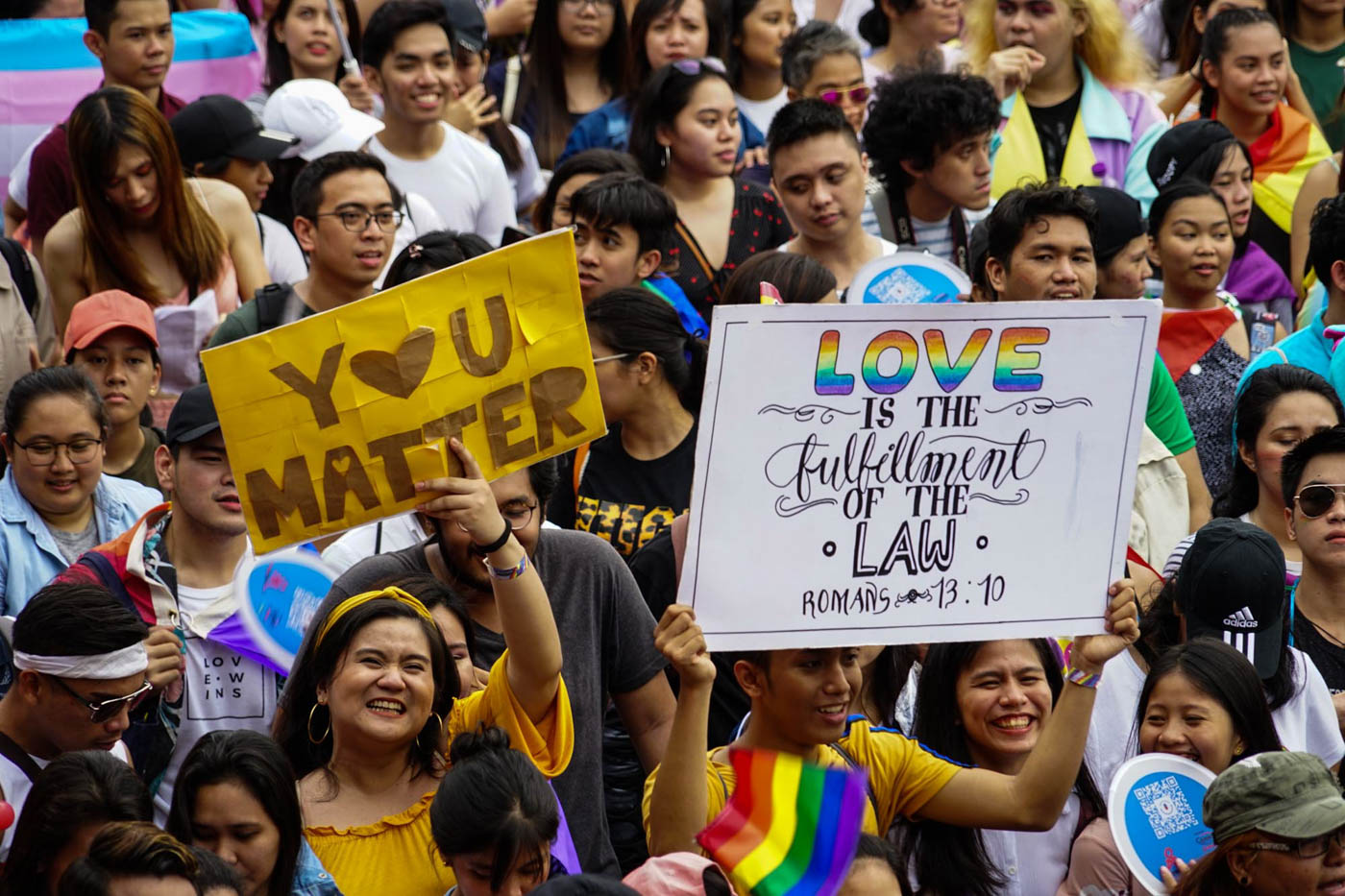