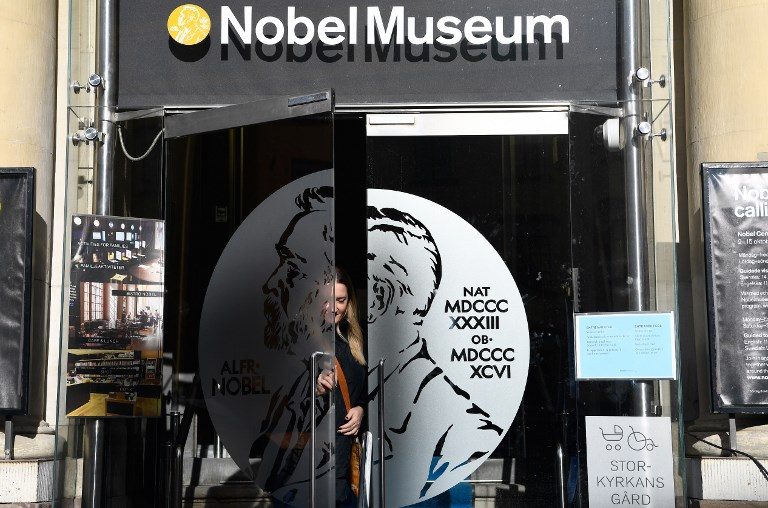 Facebook Twitter Copy URL
Copied
However, some observers are skeptical about whether the New Academy can compare with the Nobel Literature Prize's history of recognizing distinguished authors

STOCKHOLM, Sweden – What do you do when this year’s Nobel Literature Prize, the world’s most prestigious accolade of its kind, is postponed because of a sexual assault scandal?

You create your own award.

More than 100 Swedish intellectuals have joined forces to form a new prize-giving body in protest after the Swedish Academy, which selects Nobel laureates, was plunged into crisis over its long-standing ties to a man accused of assaulting several women.

The alternative honor serves to denounce “bias, arrogance and sexism”, according to its founders The New Academy, whose members include authors, artists and journalists.

It is meant to “remind people that literature and culture at large should promote democracy, transparency, empathy and respect, without privilege”, the 107 intellectuals wrote in a joint statement.

As the #MeToo movement has made waves globally, the Swedish Academy descended into turmoil in November when local media published the testimonies of 18 women claiming to have been raped, sexually assaulted or harassed by an influential French cultural figure who has long been connected to the institution.

The revelations led the Academy to announce in May there will be no Nobel Literature Prize this year, as disagreements on how to deal with the scandal sowed deep discord among its 18 members and prompted 6 to quit – including the first woman permanent secretary Sara Danius.

But for some, the lack of a Nobel literature award for the first time in almost 70 years was unacceptable.

“Sweden is one of the world’s most democratic, transparent and gender-equal countries… it needs a great literary prize,” Swedish columnist and one of the founders of the new prize, Alexandra Pascalidou, told Agence France-Presse (AFP).

The Swedish Academy’s members used to be appointed for life before its patron, Sweden’s King Carl XVI Gustaf, was forced to change the statutes, making it possible for members to resign and be replaced.

Resigning member Kjell Espmark told the Dagens Nyheter newspaper that the institution had “given way to nepotism, attempts to cover up serious violations, stale macho values and arrogant bullying”.

Seen as the bearer of high culture, the Swedish Academy, founded in 1786, is traditionally known for its integrity and discretion, with meetings and decisions on prizes kept secret.

But the New Academy plans to make its prize-awarding process transparent.

“We want to create something which is open and inclusive and which allows people to contribute,” said Pascalidou.

The new literature award – which carries a prize of one million kronor (around 97,000 euros, $113,000) raised from crowdfunding and donations – will be handed out at a December 10 ceremony, the same day as the Nobel banquet.

Librarians across Sweden have been asked to nominate up to two authors, with a deadline set for July 8. Authors with the most nominations will then receive votes online from the public in Sweden and abroad.

Based on the nominations and the vote results, a jury including publishers, literature professors, culture journalists and critics will shortlist 4 authors – two men and two women – and make the final choice.

The winner, who may come from anywhere in the world and must have published at least one literary work in the last 10 years, will be announced on October 14, in the same month as the Nobel Literature Prize would have been announced.

But some observers are skeptical about whether the New Academy can compare with the Nobel Literature Prize’s history of recognizing distinguished authors including Ernest Hemingway, Albert Camus, Boris Pasternak, Alice Munro and Doris Lessing, among others.

For Asa Linderborg, chief culture editor at daily paper Aftonbladet, it’s “deeply provocative” of the New Academy to use literature to promote moral values and even “the most disturbing ideas” can become high-quality literature.

“Art should be free. You cannot label it based on righteousness or evil. The New Academy is after total purity… total goodness,” Linderborg told AFP.

She warned that allowing the public, who may not have a profound understanding of languages and books from different parts of the world, to vote for an author risks turning the prize in favor of “predictable and Western-translated” literature.

Meanwhile others are indifferent to the initiative.

“They’re free to do as they wish,” Swedish Academy member Per Wastberg told AFP.

The new literature prize is the latest award to be dubbed an alternative to the Nobel, joining the Swedish Right Livelihood Award honoring those who work to improve the planet, and Finland’s Millennium Technology Prize. – Rappler.com