Mar 4, 2012 8:12 PM PHT
Emil Sarmiento
Facebook Twitter Copy URL
Copied
Performers, art pieces, people from all over in one of the best beaches in the world At the foot of Mount Malasimbo in Puerto Galera, amidst coconut trees, a gentle but slightly chilly wind, and a vibe of tranquil excitement, the natural amphitheater that overlooks Puerto Galera Bay resembled a depression crawling with ants.

People swarmed the grass-covered seats, found their places, collected in groups and made acquaintances, all while expectantly waiting for the 2nd Malasimbo Music and Arts Festival to kick off.

When the stage came alive, a chorus of applause and cheers marked the start of the 3-day get-together organized with the help of the D’Aboville foundation, the local government of Puerto Galera, and the Department of Tourism.

The way to the concert grounds was a steep and grassy trek. Getting to the amphitheater from the entrance required a 3-minute descent that will test your balance and surefootedness.

The view down was worth it, however, as the Bay stretched out across the horizon, clear and beckoning.

Along the way, sculptures and other installations adorned the path and on the face of the hillside, atop trees, displayed in hard-to-reach places and hidden in the open, like a scavenger hunt for art.

To the right of the main stage, atop a steep ridge, the entrance to the Mangyan Village welcomed guests as most of the workshops were held there.

Two bars, situated on opposite sides of the stage, served drinks. Ten meters behind the stage were stalls selling food, varying from goat cheese sandwiches to heavy meals like grilled pork. With the support of the Department of Tourism, the festival attracted numerous travelers from different countries, ranging from Belgium, Sweden, United Kingdom, and Australia.

“We heard about it while we were backpacking in Manila, and the description made us want to check it out,” said Natalia in broken English, a 28-year old tourist from Sweden.

At first glance, foreigners seemed to outnumber locals, perhaps because ferries from Batangas Pier stopped operations at 5 p.m., when most Filipinos are just finishing their workday.

The concert began at 4 p.m., with Supreme Fist opening the night’s entertainment. The other performers lined up for their hour-long sets, sometimes alternating between the main stage and the Mangyan Village.

Waway Siway delivered a distinct performance, as the mostly-foreign crowd stood up for his Talaandig-flavored music. From there on, the party went into full swing.

The Kyoto Jazz Massive also performed notably, prompting the throng of those in front to move and dance to their upbeat mix of songs.

Anygma closed the first night with his hiphop performance at Mangyan Village. – Rappler.com 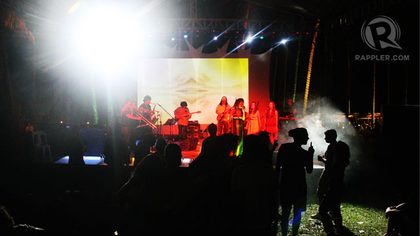