The Buwan ng Wika debate: Do we celebrate local languages or dialects? 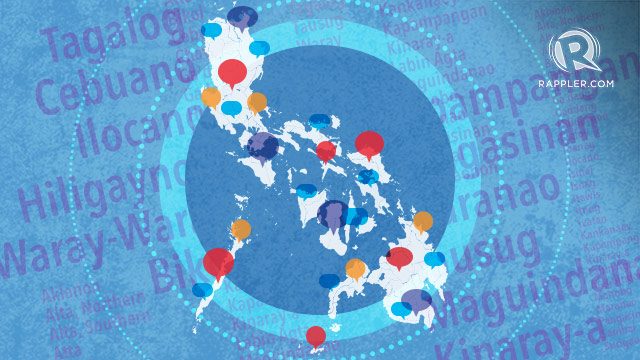 The Philippines celebrates Buwan ng Wika (language month) every August. And every year, we come back to the same, never-ending debate of distinguishing between a language and dialect.

Are Cebuano, Iloko, Hiligaynon, or that misnomer “Waray” (the locals would explain that they never use that word. It has always been Binisaya to them) languages or dialects?

A widely accepted way linguists distinguish between language and dialect is by if the two spoken forms of verbal communication are mutually intelligible despite slight variations.

This is a point of contention among linguists, who point out that there are languages in Europe and Africa that are mutually intelligible, but definitely different languages. But I will leave that debate to the linguists to resolve.

I do, however, take issue with how the terms have been applied historically here in the Philippines.

So here’s the trigger: I recently encountered an online exchange on #BuwanNgWika under a post made by the Philippine Embassy in London.

It lists a few of the country’s languages and emphasizes that these are “languages,” implying a comparison to “dialect.” I appreciated this effort to informally teach the public, or at least spark substantive discourse.

In one of the threads, one person explained how we ought to acknowledge local languages, while the other thought that the post unnecessarily injected political undertones in a discussion about language, and insisted that in truth, there was no conflict.

No conflict? My knee jerk reaction was irritation.

As a Bisaya, I felt dismissed. Do people really expect us to forget our negative experiences, hold hands and sing Kumbaya with them around a bonfire?

The post was typical of someone who came from the oppressing party: when differences are brought up, the unity card is dealt, invalidating the existence of a problem to which they have largely contributed.

To quote a friend: “Even the statement of a truth and recognition of people become objectionable to them because marginalization has been the norm for so long.”

Let’s not dismiss that there has been – and still is – a problem with the way people understand “language” and “dialect” colloquially. No matter how we argue about the technical aspects of these words, we  often encounter the rather demeaning “lang” after describing, for instance, Cebuano as a dialect.

Before anyone says “Huwag mo namang kaming nilalahat (Don’t generalize),” let me just say that we are aware of that. Of course, not everyone in Manila is too insensitive or disconnected to come after people from regions outside of NCR. I also cannot fully say there is an utter lack of healthy cultural exchange.

There will be no moving on anytime soon though if some of us keep insisting that there is no problem.

The microaggressions and the ridicule we are subjected to from individuals, to education, and in mainstream media alone are more than enough to fill an entire night’s worth of talk over buckets of beer – how could they say that conflict and power play are non-existent?

Don’t get me started on “Magtagalog ka nga (Just speak Tagalog)!” or this essay can go on for as long as Duterte’s airport press cons do. (You know, the ones where he’s supposed to talk about foreign relations but rambles on about drugs, drugs drugs.)

Anyway, I eventually calmed my tits and realized it isn’t so much a personal attack on us as it is a systemic issue.

After all, if one were raised in an environment in which one wasn’t denied their local culture and mother tongue, one’s next patriotic step might be to identify with the nation.

It’s different for generations of non-Manila kids who were made to pay a few pesos for every vernacular word they uttered in class.  The effects are far reaching, as had been the case in Cebu and other Cebuano speaking areas.

It took over ten years for local artists to encourage a love for the Cebuano language.

Prior to this, Cebuanos deemed local work as either bastos (crass) or baduy (in poor taste). Literature written in a language we use daily was deemed old school, “panahon pa ni Mam Por.” Local radio stations refused to play music written in Cebuano, until social media proved that our language can be acceptable in modern art.

Until then, the nation was stuck with Matud Nila and Manok ni San Pedro when pertaining to Cebuano art.

While these works remain important to us, the constant and limited association to dated work can be eye-roll inducing. If you can’t relate, imagine foreigner after foreigner telling you nothing else but “Pacquiao” every time they find out that you’re Filipino.

I am unsure if current practices have been updated, but efforts from educational institutions – especially elementary and high school – were not as proactive as those from the creative sector.

Growing up, Buwan Ng Wika performances were composed of Florante at Laura, Balagtasan and Tagalog fare. Schools continue to teach Filipino and use English for the rest of the other subjects, relegating Cebuano to recess or telling a kid off for misbehaving.

Personally, I find nothing wrong with including Filipino in children’s curriculum, but they seem to continue to teach it the wrong way, and it still has the same counterproductive effects.

Thus, it is understandable that in a time where more battles for recognition are being fought, this topic strikes a nerve.

It is not just hometown pride. It’s systemic oppression that affects an entire people’s esteem towards their own culture, as well as their introspective processes as a community. It prevents us from knowing who we are.

With all of that said, I agree that it can be healthier to take linguistic or geographic jargon as just that – jargon. But that’s only one side of the coin.

The flip side is proven by our experiences which have shown that the word “dialect” (or even “probinsya”) carries a heavy connotation of inferiority when colloquially used in the capital to describe other mother tongues. To skip acknowledging the problem and jumping straight to the group singing is dismissive, tantamount to saying “It’s all in your heads, folks!”

It certainly is not.

There are similarities across the regions, which we celebrate. And there are differences, which we should also celebrate instead of taking it as a threat to the Filipino identity.

Acknowledging local identity is important so we can all introduce ourselves properly to each other in this big barangay called Pilipinas. Regionalism isn’t so bad if you think of it that way – if we begin to think of our identity as a collection of regional cultures.

We weren’t given the same extensive opportunities to explore our own culture and language as the capital has.

You’re not alone in this country. Remember, it’s a stretch to dismiss other people’s experiences and expect them to Kumbaya with you unquestioningly in one homogeneous existence – that’s a little too dictatorial, don’t you think? Look around: you got neighbors, yo. Chai Fonacier is an actor, musician and writer from Cebu City.