A zero waste lifestyle: How have other people done it? 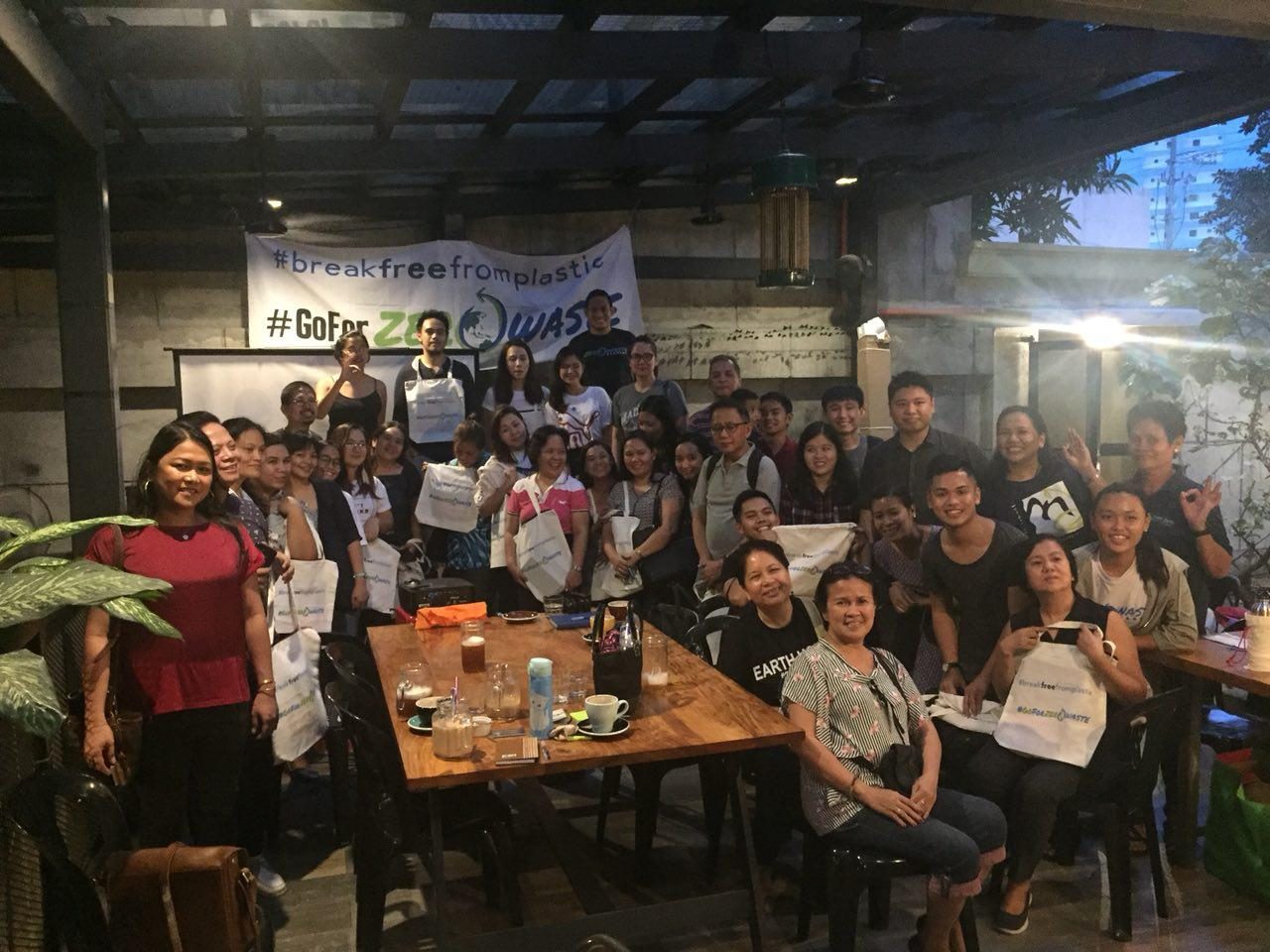 MANILA, Philippines – Year in and year out, Metro Manila has beared the barrage of the monsoon (habagat). When the rain comes, so do the floods. And with the floods, trash.

Several videos of a trash-littered Manila Bay have gone viral. Lately, a lagoon filled with plastic bottles have also made the rounds on social media.

So, what should be done?

The Break Free From Plastic Movement, a global initiative that envisions a future free from plastic pollution, and the Global Alliance for Incinerator Alternatives (GAIA)-Asia Pacific, put together Waste Not, Want Not: A Zero Waste lifestyle meet-up and workshop on August 18 at the Kandle Café in Quezon City.

The event brought together plastic free advocates for an afternoon of meaningful discussions on a zero-waste lifestyle. Among the afternoon’s speakers was April Jones-Balahan. April, a full-time worker and a young mom, shared her personal journey on going plastic free.

April was worried about the kind of world she’d be leaving her young son so she thought of ways to make this world better. Going plastic-free was her way.

She started her journey by first making an audit on how much waste she was producing.

When she gave birth to her son, they made used of disposable diapers. While it was convenient, the amount of diapers they accumulated rose as they encountered problems with their town’s trash collection. What used to be a convenience now gave her problems, prompting April to seek out better alternatives in the form of cloth diapers.

From there, she started segregating – looking at items that she can recycle, compost, or repurpose.

April is also a big fan of DIY projects as it helps her cut down on waste (she started making her own deodorant and home cleansers) and helps her save money in the long run too. She turned her own wedding veil into a produce bag which she uses when shopping for fruits and vegetables. She also started bringing her own containers – not just for shopping but also for dining. Aside from her trusty eco-bags, she brings her tiffins, mason jars, and glass containers to do away with the plastic packaging that most items come with.

“Nakakatuwa at may nakaka-appreciate din sa ginagawa ko,” April said, recalling other people’s reactions. (It’s fulfilling as many people appreciate what I do.)

Although she still gets strange looks from others when she does this, she is very thankful that a lot of people are very supportive of her cause and efforts. Her zero-waste habits have even started to rub off on her colleagues.

April acknowledges that adapting to this lifestyle is not easy. That’s why another crucial step is for one to voice out and reach out to support others and to build a community of zero-waste advocates. Froilan Grate, a native of Guimaras, started his zero-waste journey about 15 years ago.

Growing up in the island, his childhood was spent mainly enjoying its bounty – fresh air, lush greenery, and clean, clear waters. When he arrived in Manila for college, he was shocked to see the amount of trash floating in Manila Bay. Froilan then said to himself, “This is what will happen to my island if we don’t do something.”

He then made a conscious effort to lessen is impact on the environment by refusing to use plastic straws and plastic bags – something that he has managed to do for ten years now and counting.  Like April, he also practices what he preaches. He always makes use of eco-bags, brings his own water bottle, and uses an eco-friendly travel kit with for his soap and solid shampoo.

From being a student, a volunteer, and an educator, Froilan was able to share his passion and commitment to the environment with the work he has down with various NGOs and communities. With his work with the Mother Earth Foundation, an organization that advocates for zero waste in the country, they were able to help in the transformation of Brgy. Fort Bonifacio in Taguig. The barangay was once practically an open dump, with piles of trash strewn over its main thoroughfares, posing as a hazard for all residents and those passing through.

With a massive information campaign, household level segregation, and by empowering waste collectors, Brgy. Fort Bonifacio is now a model barangay with its own materials recovery facility (MRF) and eco park. What were once trash riddled streets are now promenades that residents get to enjoy.

The project also created jobs and improved the working conditions for people – from waste pickers they have now become waste collectors, earning about at least P8,000 a month.

Froilan was also happy to share that a similar project but on a much bigger scale has been a success.

The city of San Fernando, Pampanga is now a model for decentralized waste management with MRFs in all 35 barangays. As a result of this, more green jobs were also created and the city no longer has to spend exuberant amounts for its solid waste disposal.

To help jumpstart having a zero-waste lifestyle, the event also featured a pop-up store. Proceeds from the sales will benefit the children of waste workers.

A practical demonstration on compositing was also done wherein participants where shown how to create their own composting system that can fit well with their urban lifestyle. In the end, everyone who attended the event left with a better understanding on how to start a zero-waste lifestyle, a deeper appreciation and awareness for our environment, and the knowledge that there is a welcoming community to help them start and support them throughout their journey. –  Rappler.com

April Jones-Balahan is a zero-waste advocate. You can be part of her journey by following her on Instragram @apriljonesb. She was also featured in Howie Severino’s documentary “Plastic Republic” for I-Witness.

Froilan Grate is the president of Mother Earth Foundation. He is also the regional coordinator for GAIA-Asia Pacific.

To learn more about a zero-waste lifestyle, you may visit the Break Free From Plastic movement FB page @breakfreefromplastic or visit their website at www.breakfreefromplastic.org;  GAIA Asia Pacific at @GAIAAsiaPacific for Facebook and Instragram, and the Mother Earth Foundation at www.motherearthphil.org  and @motrherearth.ph (FB).