Facebook Twitter Copy URL
Copied
By morning, the winding queue stretched around the residential blocks behind the store – why did so many people line up?

LONDON, United Kingdom – Why would one queue for 17 hours just to eat fried chicken?

For Michael Sison, a balloon artist from Guildford, southern England, it was all because his 7-year-old daughter Kyla had a dream about a month ago.

Sison invited his kumpare Reggie Derecho to come with him to Jollibee’s first UK store located on Earl’s Court Road, which they learned through social media, was opening on October 20. They decided to be there early, so they took a train to London on Friday, arriving at the store at 3 pm, a day before the opening. Sison even brought with him a balloon of the Jollibee mascot’s face that he made. Because he was the first customer, Jollibee Foods Corporation gave Sison a free Chickenjoy with rice, a Jollibee plush toy, a Jollibee backpack, and a Funko Pop Jollibee figurine – there are only 4,000 of such in the world, according to JFC.

“Sulit na sulit ang pagpila namin (Our lining up was really worth it),” Sison said.

Because the two friends went together, JFC decided to give Derecho the same goodies as well.

“Sabi ng iba, huwag ko daw tanggalin sa box ito para mataas ang halaga (They told me not to take it out of its box so that the value goes up),” said Derecho, as he showed his Funko Pop collector’s item. He said his seven-year-old daughter Bramley had encouraged him to go to the Earl’s Court store on opening day. 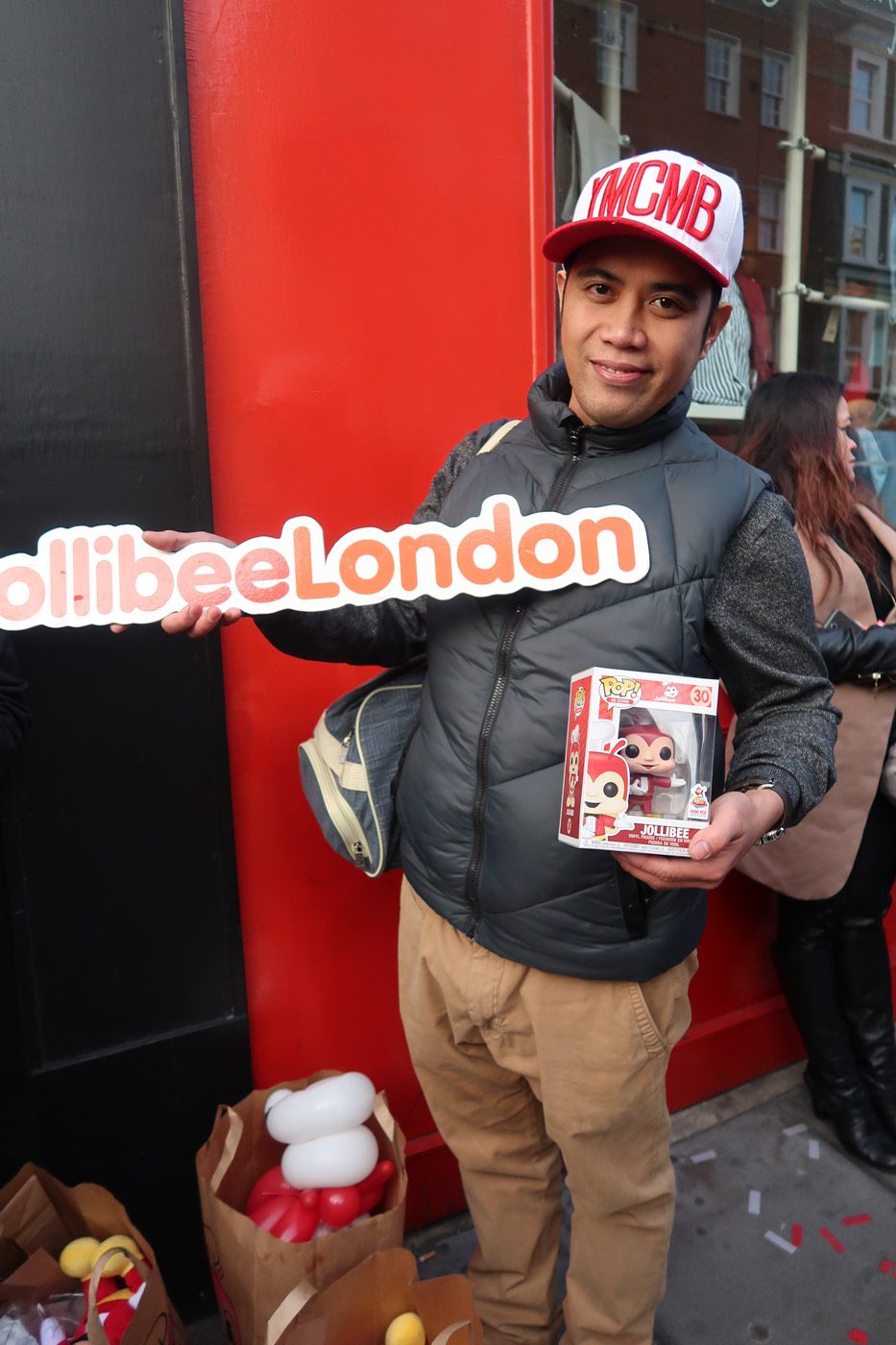 By queueing for 17 hours outside the restaurant, the two friends also got something they consider to be priceless: “Nagkaron kami ng mga bagong kaibigan (We made new friends),” said Sison, referring to the other people who also queued overnight. Filipinos who lived nearby showed them hospitality, offering them use of their toilets, he said.

Fifteen minutes after Sison and Derecho started queueing, two Filipinas who booked in a nearby hotel arrived, and then more and more people started coming during the night. By morning, the winding queue stretched around the residential blocks behind the store. Nick Mendoza, who has been in the UK for 3 years, joined the queue at 1 am with his three friends. They learned about the date of the store opening through Jollibee’s website and Facebook. He said they went early because they wanted to get a free Jollibee toy. 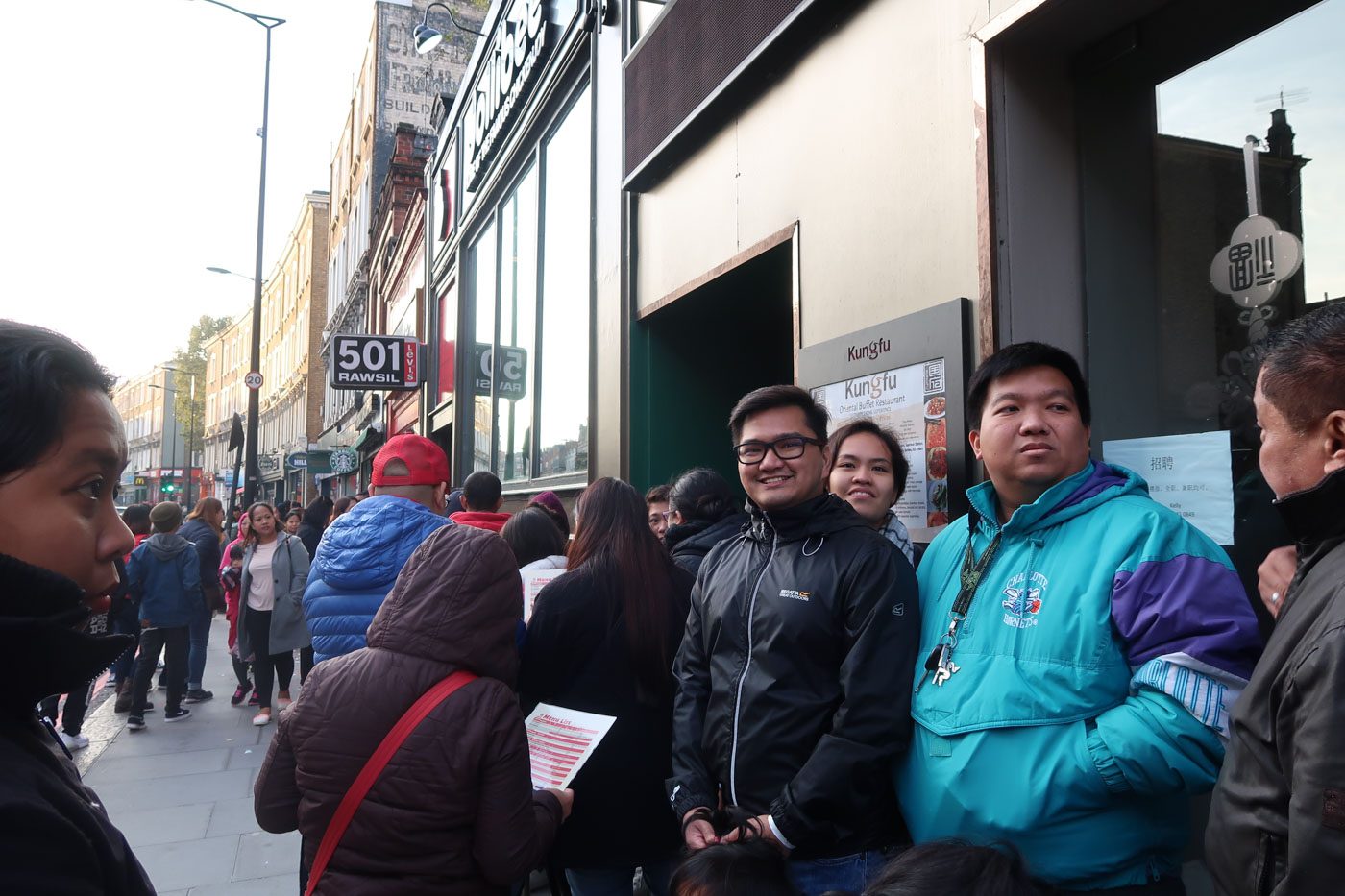 Numbers 96 and 97 in the queue were Francine Bailey and her 3-year-old son Evan. She said they arrived at midnight. Bailey, who is married to a Briton, said her son had his first taste of Jolly Spaghetti in February when they went home to the Philippines for a holiday.  She said Evan “knows Jollibee” and was looking forward “to seeing the mascot and high-fiving with him.” Evan was fast asleep in his buggy when his mom spoke to Rappler. Jollibee Foods made sure it was prepared for the crowds. It hired private security men to make sure no one jumped the queue and everyone was safe. “Please clear the way. You might be hit by the passing cars,” one of them kept telling people who stood by the curb.

Jollibee also coordinated with the police and local council. By 9 am at least two police officers were deployed near the restaurant to make sure traffic moved along. Drivers and passengers in cars, buses and delivery trucks travelling on the busy street were rubbernecking to see what the madness was about.

“Fuck,” Rappler heard one police officer inside a passing police van say, evidently shocked at the large number of people outside the store. Then he turned to his colleagues inside the vehicle, and, with a smile on his face, said: “It’s insane.” Less than two hours after the store opened, Jollibee had run out of wristbands – they had prepared 1,600 tickets, according to a store service crew member. The restaurant then had to use numbered stubs instead, which had already reached 130 by 10 am. Most of those in the queue said they were planning to order Chickenjoy, which now comprises 60% of Jollibee’s sales worldwide.

Jollibee UK’s general manager Fred Ventura said this was comparable to prices in the UK. He pointed out that two pieces of chicken, fries, and a drink at KFC costs £4.29. “But you still have to buy gravy at KFC,” said Ventura.

Jollibee Earl’s Court does not yet offer palabok, which is very popular with customers in the Philippines. Ventura said they hope to be able to include it in the menu soon, and the usual Jollibee breakfast by December. Halo-halo will have to wait until the summer.

Even as Jollibee opened its first store, many customers were already asking where the next UK branches would be located.

One Jollibee staff member who was speaking to some people in the queue told them the next branch could be in Victoria – a central railway and bus station in London, and a stone’s throw away from Buckingham Palace.

“Pwede bang sa Edinburgh (Can they open in Edinburgh)?” a man in the queue asked the staff member, referring to the Scottish city about seven hours by car from London.

An hour after they entered the Jollibee store, first and second customers Sison and Derecho were ready to go home to their families, bearing bags full of gifts from Jollibee, and the Chickenjoy, burger steak and spaghetti they ordered to take away.

Sison said he has already told his daughter that he made it as the store’s first customer. “I’m proud of my dad,” Sison said she told him.

“Kahit mahaba ang pila, worth it naman (Even though the line was long, it was all worth it),” Sison said.

He will be back, he said, next time with his wife and two children, including Kyla who dreamt that her father would be Jollibee London’s first customer.