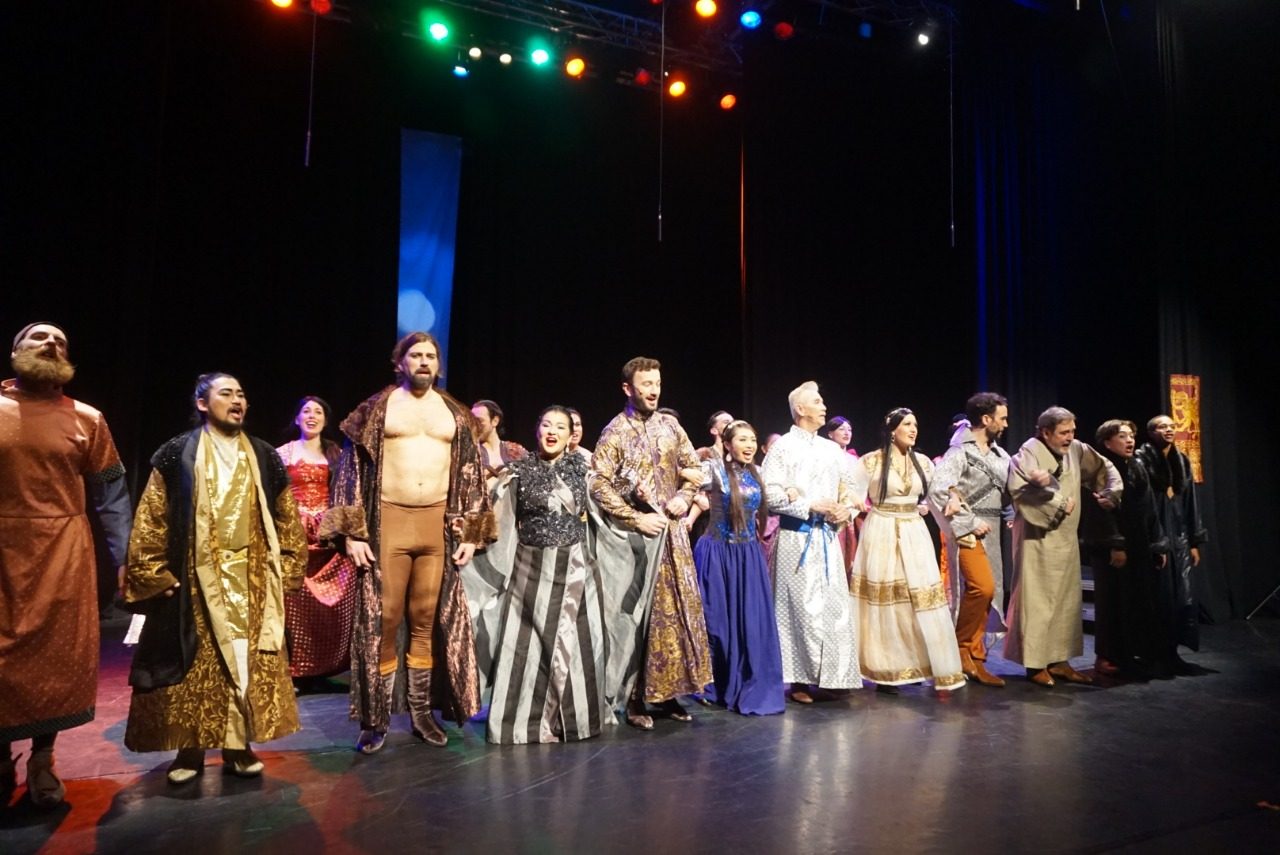 BERLIN, Germany – Following well-received preview runs in Manila, Paris, and London, Marco Polo: When You Find Your True Love staged seven shows in the German capital from October 31 to November 4.

The play, set in 1271, tells the story of Venetian merchant and explorer Marco Polo, his journey to Cathay, his love for Princess Kogajin, and his quest of fulfilling his ambitions.

Written by Filipino-Belgian director and thespian Rogelio Saldo Chua, the lyric musical started out as a passion project that came from his penchant for the romantic and his love for the story of Marco Polo, which he grew up with.

Chua says his project isn’t quite done yet, as the story continues to evolve with every iteration of the play. “We’re now on the fourth evolution of the play,” Chua said. “The first one we had at the Cultural Centre, it was more like a travelogue,” he added. At that time, the play focused on Marco Polo’s journey which took him from Italy, Israel, Afghanistan, and finally, to Cathay.

The second and third iterations focused on the love story between Marco Polo and Princess Kogajin, the fictional daughter of Kublai Khan. “It was more of a fable. An allegory for our common humanity in love,” Chua added.

He describes the play’s current version as something that people nowadays can relate to. “I rewrote it in order to showcase what is a modern malaise – motivated ignorance.” Chua said.

“All of us are consumed by passion, power, lust, ambition and with little information on the consequences of our actions, we pursue them, sacrificing our families and relationships. Even sacrificing what your true self is. We are picturing that weakness here – the dark side of modern humanity,” he added. All these is shown, while still putting travel and thee East meets West story line on stage.

Actress Pinky Marquez reprised her role as Empress Wu, the mother of Princess Kogajin, bringing in her years of experience and impeccable stage presence. “I see great potential [in the play],” Marquez, who’s been with the play since its early stages. “It’s an ongoing experimental workshop. It’s from scratch and I want to see it through.”

Despite success among its audience, the play has encountered critics who weren’t so happy about certain things. This, Chua says, is quite common for any musical. “Just like any other material, it needs to go through several testings. Regional tours, presentations. It happened to Wicked as well,” Chua said. “Many musicals that are now well-known had to go through a baptism of fire.”

It’s how they react to constructive criticism that makes the play better.

Taking into account what the audience loved and what professional critics had to say, Chua is now re-hashing the play for its fifth evolution. One, he says, that people should really watch out for.

After working with a minimalist set during their Europe runs, Chua is re-envisioning Marco Polo’s journey. One, he hopes, will really put the story center-stage and everything else second. “We are now looking into a post-modern, minimalist approach for the next iteration with modern music using synthesisers,” he said.

Theatre actress Gian Gloria plays Princess Kogajin, Marco Polo’s love interest. It’s her second time performing in Berlin. The first, as a contestant for Euro Pop where she won fourth place. She admits that the new approach would mean a lot of pressure on her and the rest of the cast, “With the post modern version, there’s going to be less sets and that’s going to be challenging to show where we are in the story. There’s a lot of pressure but if we pull it off – wow.”

Philippines-based Franco-German actor and model Jonathan Wagner plays Marco Polo. Actor Ian Venida, who was part of the 1995 staging of Miss Saigon in London, is an impressive Kublai Khan on stage.

Filipino actor, director, and all-around theater veteran Miguel Faustmann plays Marco Polo’s father, Niccolo. He was also part of the research that placed as many facts as possible to complement the fiction in the play.

“We researched so much on the Chinese, the Venetian, Marco Polo’s journey and looked at so many photographs,” Faustmann said. This was to get close as they possibly can with history, he added.

Chua added the previews, which were staged in Admiralspalast Studio, were a success. The 400-seater theatre was almost filled-up during a gala night co-organized with the Philippine Embassy.

“The whole idea behind the Berlin tour is to attract prospective producers for a bigger engagement in either Potsdamer Platz Theatre where we already have some links,” Chua said.

Should everything go well on the business side, the play is slated to come back to Germany by next year – this time, in its full-German version. —Rappler.com