Rappler Talk Entertainment: Voltaire Tayag on what it takes to win a crown 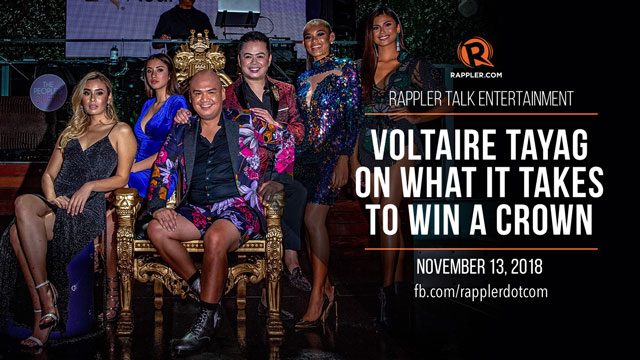 Facebook Twitter Copy URL
Copied
Why do pageants matter and what do they bring into the conversation?

It’s an image most of us are familiar with – of a statuesque and glamorous woman sashaying down a runway, hand waving to an adoring crowd, with a huge crown on her head and a sash that proclaims her the most beautiful in her country, the earth, or the universe.

And while beauty pageants aren’t everyone’s cup of tea, there’s no denying the impact they’ve had on society, especially in the Philippines.

Pageant season is upon us and there’s no better time than now to talk about pageants and why they matter so much in the Philippines and the world at large.

Rappler talks to Voltaire Tayag, our resident pageant expert and co-host of The People’s Queen, a newly-launched reality series that follows 5 beauty queen hopefuls – including newly-crowned Miss World Philippines Katarina Rodriguez – as they train and improve their skills.

Catch the interview live on Tuesday, November 13, on this page, on Rappler Entertainment’s Facebook page, or online. – Rappler.com