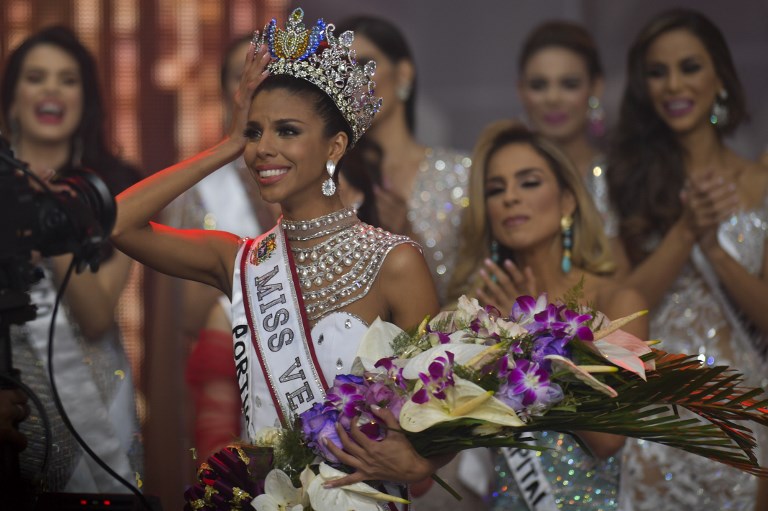 CARACAS, Venezuela – The title of Miss Venezuela went Thursday, December 13 to a woman from the country’s largest slum after a ceremony that traded glitz for frugality reflecting an acute economic free fall.

The new beauty queen in a country that loves this kind of pageant is Isabella Rodriguez, 25, from a Caracas shantytown called Petare – home to well over half a million people.

“From Petare to the world, dreams can in fact come true,” Rodriguez, who works as a model, said during the question and answer session of the contest. Girls in her crime-ridden slum want to emulate her, she added.

The ceremony lasted 4 hours and some people on Twitter called it tedious and boring.

It had its share of gaffes, such as one contestant walking out on stage without the sash indicating what state she represented and another whose dress slipped off during a dance number.

With the organizers seeking to cut costs, the 65th edition of the pageant was moved from its historic home at an arena with room for 20,000 people to a 200-seat television studio.

The economy of this oil rich country is in ruins after 5 years of recession. People endure severe shortages of food, medicine and other basics and inflation for 2019 is forecast by the IMF to come in at a mind-boggling 10 million percent. An estimated 2.3 million Venezuelans have fled since 2015.

The economic crisis meant much of the glamor had to go this year, and some of the contestants have been turning up to rehearsals by bus or metro.

The organizers were forced to shut down temporarily amid accusations that officials had procured young women as sexual companions for wealthy sponsors, including businessmen and officials in the government of President Nicolas Maduro.

Osmel Sousa, director of the Miss Venezuela Organization for nearly 40 years and nicknamed the “beauty czar”, stepped down. He has denied any wrongdoing.

Rodriguez will represent Venezuela at the Miss World pageant, where Venezuelans have an envious track record, sharing with India the record for the most victories – 6. – Rappler.com