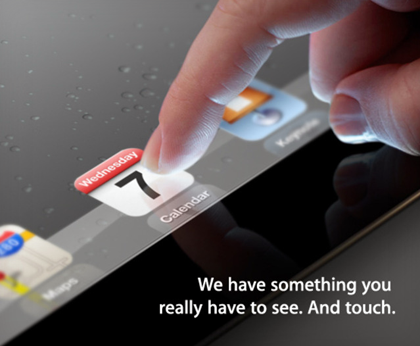 2:00am: Apple Live event has started. Tim Cook is on stage talks about Apple leading the post PC revolution.

2:06am: Cook: Another reason for post PC success is iOS. Apple brings Siri to Japan today.

2:12am: iTunes in the cloud supports movies. TV shows in 1080p which you can play on the new Apple TV.

2:12am: New interface of Apple TV works very much like iOS. It will sell for $99, just like the old Apple TV.

2:17am: “The iPad is so ubiquitous, and so entwined in mainstream culture already, that it is hard to imagine a time w/o it.”  Tony Bradley, PC World

2:18am: Tim Cook says when they set of to create the iPad they wanted to create not just a device but a whole new category.

2:21am: Cook stresses more than 200K apps are custom built for the large screen. Compares that to Twitter app on Galaxy Tab w/c looks blown up.

2:23am: Phil Schiller takes the stage to demo the new iPad.

40% Better color saturation than before.

The Home Button is retained on the new iPad. A5X processor. Quad-core graphics.

2:37am: Schiller: “We have other high-speed networks as I’ve mentioned around the world.”

2:47am: Upcoming apps and games being demoed.

2:54am: iWork for the iPad updated to take advantage of the new iPad’s Retina Display

2:55am: Productivity apps also updated including GarageBand and iMovie.

3:00am: iPhoto for iPad is announced to complete iLife on the iPad.

The new iPhoto for the iPad gives you multi-touch editing controls, pro effects, photo book, and ability to beam photos between devices.