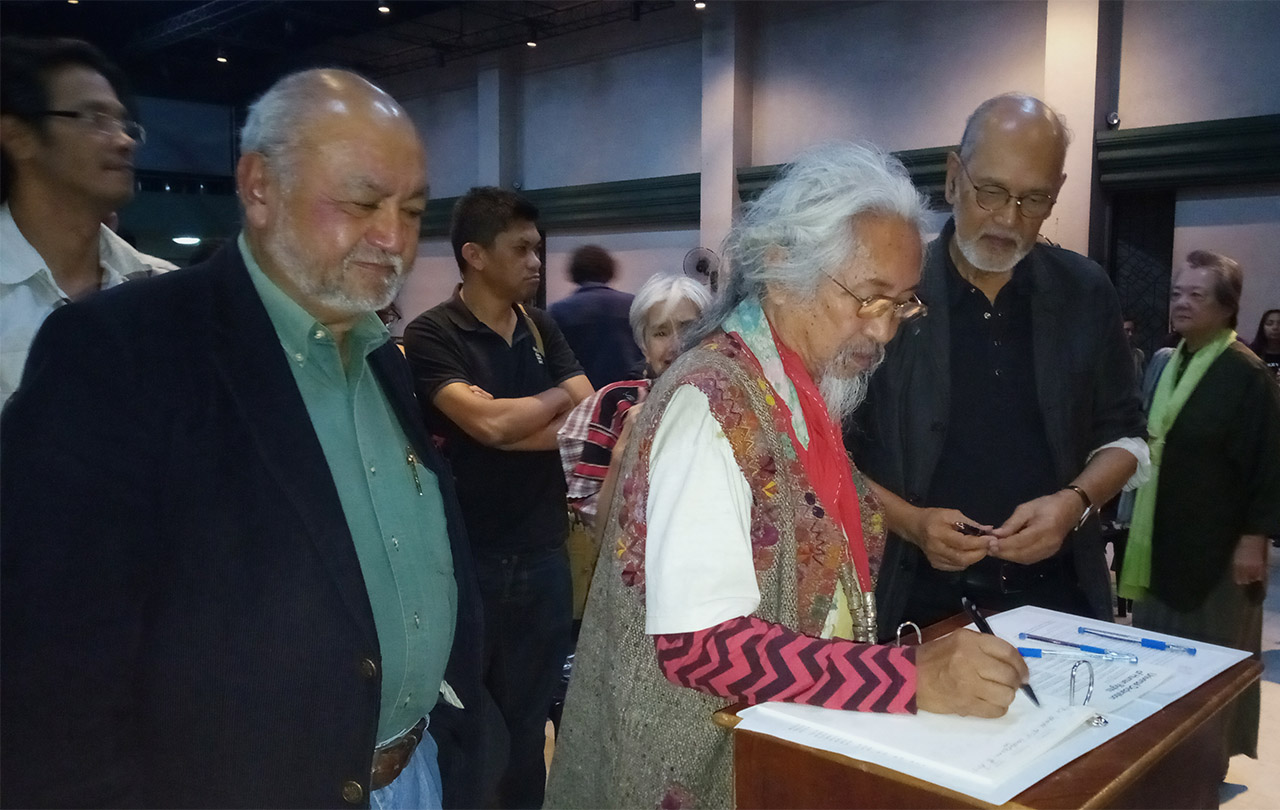 BAGUIO CITY, Philippines – Tao Po has been staged several times, but for actor Mae Paner, the last one held at the University of the Cordilleras on February 8 stands as her most memorable so far.

Aside from having the biggest audience, two national artists, Bencab and Kidlat Tahimik, were in the audience in support of the cause for justice.

Tao Po is a play of words on the dreaded knock on the door (Tokhang) and as a reminder of one’s humanity. Tao Po, a collage of perspectives on EJKs, asks if the ugly face of the almost nightly killings is really the best answer to the drug menace.

In a gripping soliloquy, Paner gives voice to a photojournalist whose compassion is awakened by the gory pictures of senseless killings he takes as part of his job. He then uses his camera as a tool to uphold human rights. “I will keep taking photos to remind everyone that these victims existed.”

Paner then personifies Rosing, the Zumba instructor. In an unexpected creative stance, while making her Zumba moves, she calls out Marcelo, her husband, and Jojo, her son. The audience later realizes are dead as she pleads for them to leave her in peace so as not to be reminded of the night of their killing. Eventually her confusion begins to be a resolve to seek justice and she speaks to her husband to stay with her in that fight… walang iwanan, as her words fade into sobs.

The killer begins his story with gentle memories of his childhood on how he would squirm at the sight of blood of animals slaughtered for food. His father taught him to toughen up by killing an animal himself. As he grows older, the ingrained lesson is that manliness mean being tough. He becomes obsessed with blood, relishing blood dishes, and eventually emboldening him to kill people.

He betrays his soft side when he asks for a kid to be spared after his father and pregnant mother are gunned down. But in the end, he is compelled to shoot the boy, who reminds him of his son.

He tells the media the killings take away the scums of society. He reasons with his conscience and tells himself it’s just a job that earned him a motorbike and a small farm, even little gifts for his mother.

Lastly, Vanessa appears, her aura of pink innocence a contrast to a morbid setting. She speaks to the EJK victims in her neighborhood stuffed in boxes piled one on top of the other, like the paupers’ side of the cemetery.

She lights a candle for them so that they may see their way to the afterlife and for her parents who were shot by masked men.

The impact of the play was palpable in the silence loaded with emotion, some in tears, before breaking into a standing ovation. Paner, rather than taking a bow, made a plea to the audience to spread awareness and not to be numbed by the daily bombardment of violence in the news.

Ray Dean Salvosa, University of Cordilleras President, said Mae had put into context what everyone has been worrying about since the new administration took over.

“We worry about the desensitization of our people,” he said, and thanked Paner for the honor of staging Tao Po at UC where the play can again be staged for many others who could not be accommodated.

Karlo Altomonte, noted theater director, said that this administration has made the people paranoid. “Inspire me instead of making me afraid,” he said.

Comments from the audience also told of the power of theater in promoting human rights. Kidlat Tahimik likened the policeman’s constant wiping blood off his hands after a kill to Lady Macbeth’s constant washing of her blood-stained hands, the symbol of universal guilt that haunts the conscience.

“We always think of Juana Change making people laugh but here she showed the range of her acting.” He also praised the assemblage of stories in the four-act play. “We are so used to statistics, but Mae gave faces to the victims of EJKs through art,” he said.

Lawyer Rommel Daguimol, head of the Commission on Human Rights in the Cordillera, said the play surfaced the issue of human rights without being offensive. CHR–Cordillera was a major sponsor of the event.

Despite the poignancy of the stories, all lifted from real life accounts, they all end in a tone of hope.

Photojournalist Raffy Lerma, whose works inspired Act 1, said that he cannot turn a blind eye to what is staring him at his face. Rosing becomes a warrior for justice. The child in the policeman speaks to his conscience, and Vanessa lights candles for justice.

Tao Po, written by Maynard Manansala and directed by Ed Lacson Jr., was likewise sponsored by Hudyat: Artists for Human Dignity; Let’s Organize for Democracy and Integrity (LODI) and the Baguio Writers Group.

Artists and writers led by Kidlat Tahimik and Bencab, UC president Salvosa signed the manifesto of Artists for Human Rights (AHRT) declaring their commitment to make art their weapon to uphold truth, freedom, human rights and dignity for all, at all times. – Rappler.com