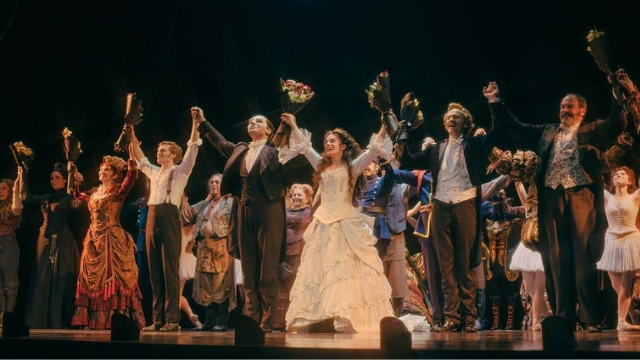 MANILA, Philippines – It’s no wonder that the Phantom of the Opera has gained quite the following among Filipino fans. It is, after all, a show that’s heavy on the drama and theatrics, hits the highest of notes, and has several passionate love songs on its soundtrack.

Naturally, when it was announced that the show would be returning to Manila for a limited run beginning February 20, Filipino phans rejoiced. The last time Philippine audiences had a chance to see Phantom was 7 years ago, and its return could not have been more celebrated (in fact, the closing date has been extended several times – the run now ends April 7).

This time around, the play is running at the Solaire Theater, with a new main cast, save for Jonathan Roxmouth, who returns as Phantom.

Phantom is a spectacle that perhaps is more fit for a bigger stage (the last time it was staged in Manila was at the CCP Main Theater) – but what the production does with Solaire Theater’s smaller stage is impressive. Anyway, the mild claustrophobia one feels at seeing the tighter space only amplifies the feeling of dread that the unseen opera ghost creates.

And anyway, a cozier venue only means that no matter where one sits, one can appreciate all the finer details in the set design and the costumes. In fact, the details – and the audience’s proximity to it – are so enchanting that from time to time one might find their attention wandering off from the action and on to, say, the moving set pieces in the Hannibal dress rehearsal scene, or to the countless crystals in the chandelier overhead, or to pretty much everything everyone is wearing in “Masquerade” (arguably, the most visually stunning number in the show).

But the actors, and the music, always come in at the right time to snap anyone out of their reverie, or lure them into a different kind of trance.

Anchoring the show is Jonathan Roxmouth, who also played the title character in the previous Manila run. His experience in playing is evident in the way he embodies the character completely – from the way he stands, to the way he unfurls his fingers, and, most importantly, to his voice. It is for sure a function of his character that his presence is felt without him even being onstage – but it is also a credit to Jonathan himself, whose voice is as powerful (and as threatening, and as pitiful) when it is booming, as when it goes down to a stage whisper.

Holding her own next to Jonathan is Meghan Picerno, who plays Christine Daaé. As the leading lady and the object of the Phantom’s obsession, Meghan projects bright-eyed vulnerability and delivers a strong soprano performance to match. Even at her most fearful, we feel that Christine is a force to be reckoned with – particularly because of her unwavering vocals.

Completing this doomed love triangle is Matt Leisy, whose take on Raoul is less the dashing Prince Charming, more the impulsive brave boy – the young man just before he becomes a hero. It is ultimately a more endearing portrayal of the character, and a better match – vocally, and emotionally – to Meghan’s Christine.

In 2019, the musical’s premise rings rather old-fashioned, problematic even. There are many ways to read the story in the #MeToo era – whether the play boxes its female characters into stereotypes, whether the story glorifies or condemns the Phantom’s murderous, obsessive stalking – these points deserve a separate discussion.

At any rate, one realizes that Phantom is not quite the timeless tale its theater tenure makes it out to be. But what it still is – and perhaps, what it always will be – is a devoted tribute to classic forms of performance art, executed in fine fashion by a pitch-perfect cast, and uncompromised production.

In the same way that the lonely, menacing Phantom was able to lure the bright young Christine Daae into the depths of darkness with his voice, so too did this production of Phantom of the Opera – technical brilliance and all – leave audiences quite spellbound. – Rappler.com