Nostalgia is a hell of a drug. For starters, it gives a person the chance to escape, to be out of the moment instead of in it.

At first glance, Ang Huling El Bimbo, a musical that draws from the Eraserheads songbook, appears to be the type of work that deals heavily in nostalgia. And, certainly, the show packs a heavy dose of 90s references. The plaid fabrics, the baggy clothes, the university culture – it’s all here. Even the blocking and ever-shifting set design recall the manic pacing of an Ang TV episode.

Like most mind-altering substances, nostalgia also comes with a heavy price. At its worst, it can be pandering, or even regressive. Thankfully, Ang Huling El Bimbo isn’t just a rose-tinted review of life in the ’90s. By staying true to the tragic themes found in many Eraserheads songs, Ang Huling El Bimbo gets to tell a timeless story steeped in heartache and regret.

The story focuses on the complicated relationships of 4 friends – Joy, Hector, Anthony (also called AJ – as in Hey Jay), and Emman. It begins at present day, with the murder of Joy. The 3 remaining friends are summoned to the police station, and are forced to reexamine their relationships with Joy – and themselves, really. The story then unfolds mostly as a series of flashbacks. The 3 boys are bright-eyed college freshmen in the state university, while Joy is a helper in Toyang’s Canteen.

“You can never be too happy in this life”

There are socio-political undertones to the story, but you can only explore that so much when your story uses a pre-existing collection of songs. Ang Huling El Bimbo truly shines when it uses the Eraserheads songs as a soundtrack for college life. One standout piece was “Pare Ko,” which the cast performed during ROTC. The song gets a new martial cadence, and the rigid rhythm made the song’s bitter, emotional lyrics even more potent. (And for those wondering, they did use the NSFW version of the lyrics in the last chorus.)

The production design is also splendid here. The sets can range from the familiar (Toyang’s Canteen; the various campus hangouts) to the dreamlike (the road trip scene).

For the latter, a Lancer Box-Type takes the 4 friends on a road trip beneath a canopy of racing stars. They sing “Alapaap” during the trip, which is a spectacular crescendo to the story. This beautiful set is also where one of the most harrowing scenes take place. While at the peak of their happiness, a group of men ambushes them and rapes Joy. There are some problematic things here, which I’ll get into in a bit, but the rape comes across as a mere plot device to introduce gravitas to the characters.

“In a world where everybody hates a happy ending story”

Ang Huling El Bimbo is less about coming of age, and more about the loss of innocence. That is what keeps the musical from becoming a simple nostalgia piece. Heck, even Hector, Anthony, and Emman themselves want nothing to do with the past. Racked with guilt, they awkwardly brush off Joy during their graduation. They’ve got their lives ahead of them. Joy’s just ended. 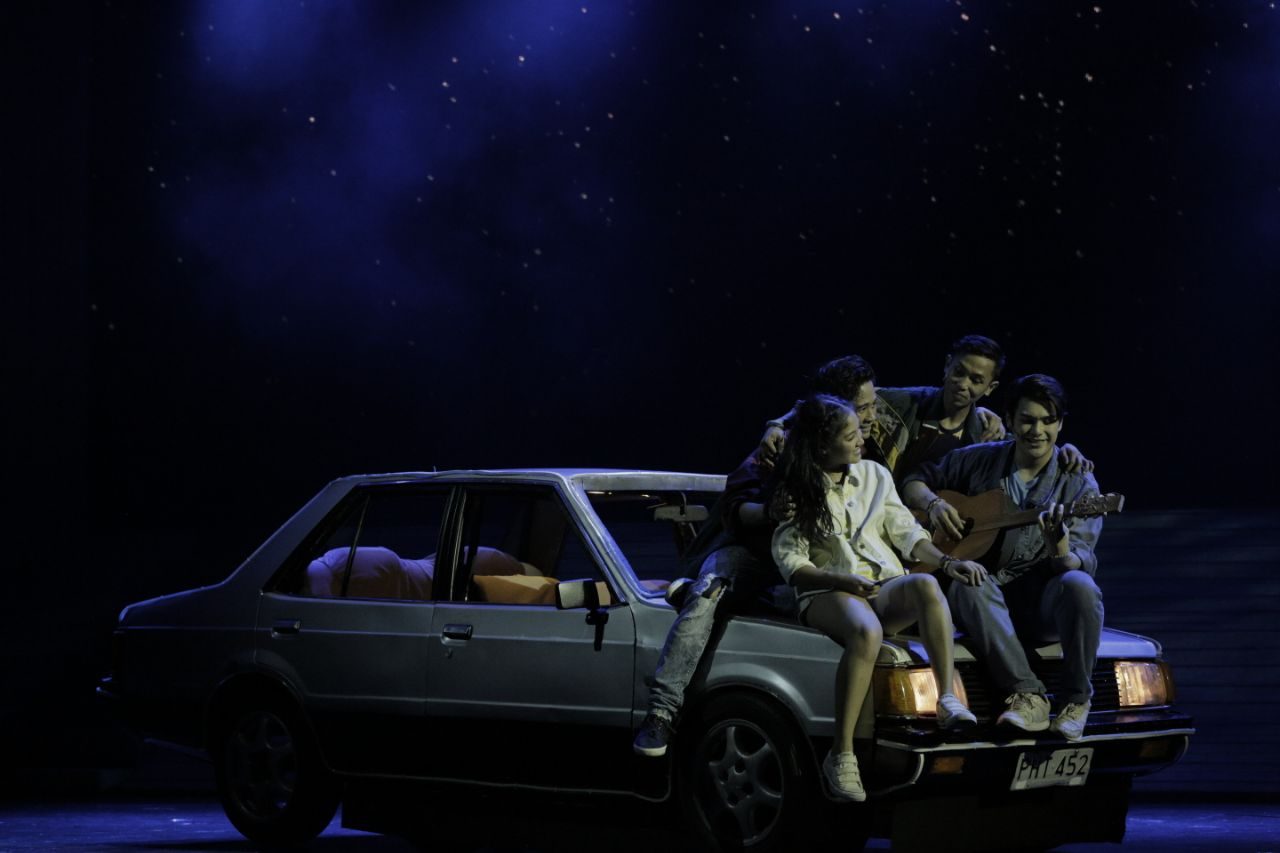 I have mixed feelings about how Joy was written. Gab Pangilinan’s portrayal of the young Joy is full of light and exuberance, and it’s hard not to root for this character. But Joy is still a tragic character whose defining characteristic is that she was tragic.

After graduation, they each go their separate ways. The 3 boys lead professionally successful, but personally unhappy, lives. Joy falls further down the spiral. Toyang’s Canteen becomes Toyang’s KTV. She eventually works as a prostitute and drug runner for a local politician.

An older Joy gives birth to a daughter, Ligaya. She promises to always do right by her child, and regales the kid with stories about her 3 absentee best friends. Hector, Anthony, and Emman have prospered, but their personal relationships are in shambles. It was Joy who was hardest hit by tragedy, but among the 4, she’s the only one fighting for something bigger than themself. The politician needs to clean house, so he runs over Joy (a scene which references the line “At isang gabi’y nasagasaan sa isang madilim na eskenita” from “Ang Huling El Bimbo”). Joy’s death forces the 3 friends to examine their own lives, and how they abandoned her. The surviving friends vow to take care of Ligaya, but there are no real happy endings here.

Ang Huling El Bimbo is a potent work of art because it encourages us to unpack these songs further. It takes our appreciation for a pre-existing collection of music, and uses storytelling to make us examine them. We come for the songs, but it’s the questions that will stick. – Rappler.com