Kahit na sinag: ‘The Kundiman Party’ in these interesting times 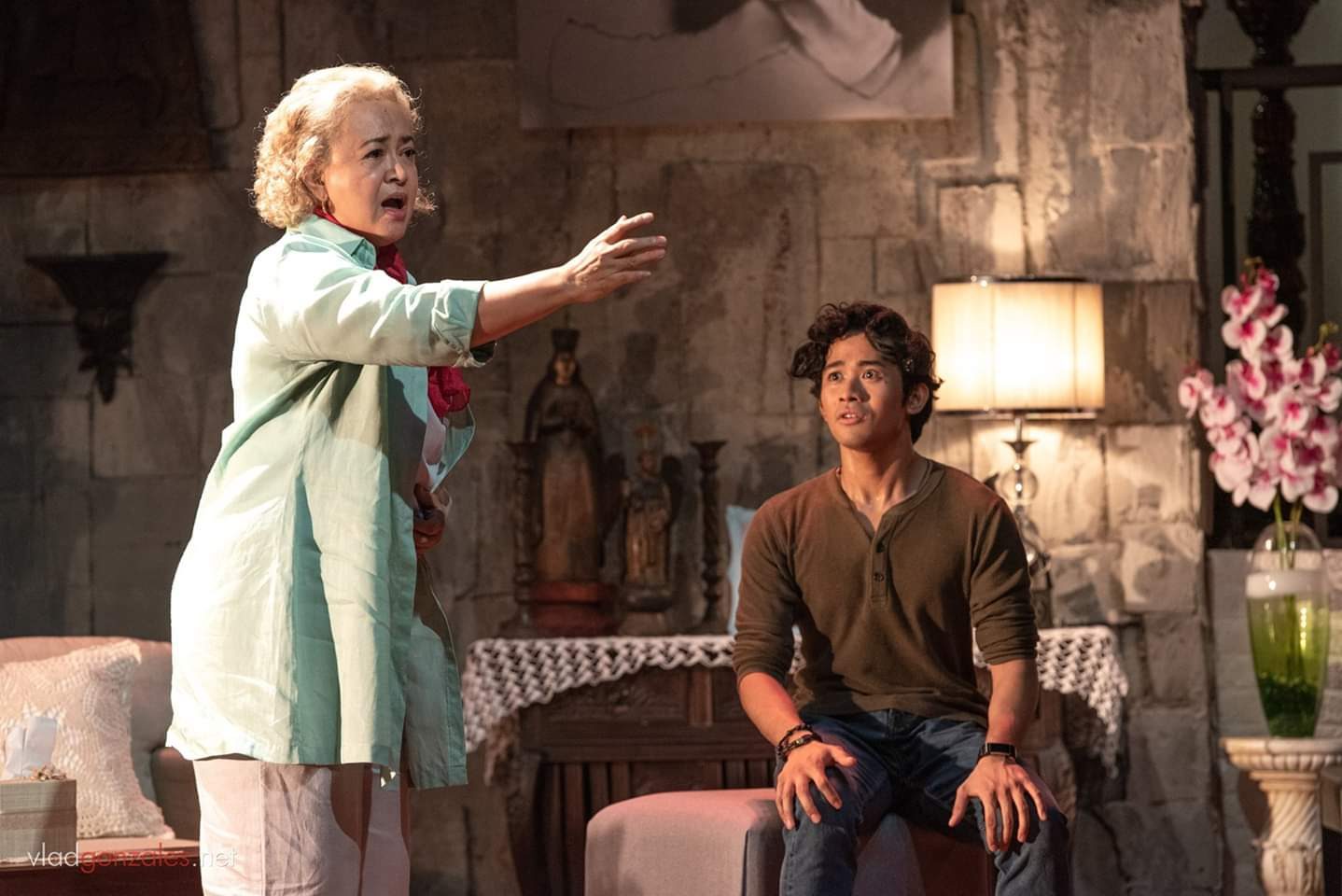 “I chose!” cries the Maestra, the red of her scarf bleeding in the spotlight.

No one in the audience has so much as exhaled. The narrative of her sacrifice is scored and culminates in a crescendo, and everyone bemoans that they didn’t march with her, in the darkest timeline. House right, a bleeding heart forgets that he directed this performance. When she is finished, she assumes once again the posture of one who has gracefully exited the lights.

Floy Quintos’ The Kundiman Party is, at its heart, a story about art.

Maestra Adela (played by the gracious and tender Shamaine Centenera-Buencamino) was Norma at La Scala, the next Atang de la Rama, voice in the Palace and then of the revolution. She sacrificed her voice to drive a point in, “sakdal laya.” Freedom! But now, she lives through this. The only balm is to teach the kundiman, and through it a nobility ingrained.

These lessons find their way to a digital audience, by way of every millennial tibak effected in the zealous, almost Machiavellian Bobby (the ever-charming Boo Gabunada). What comes in through the door he opened is the intimidation, fear, and anger that we hear from (and live) outside the intimate space of Adela’s living room. What comes next is a song.

I was fortunate enough to have seen the first staging of The Kundiman Party by Dulaang UP last year. My sister is a voice major at the UST Conservatory of Music, and my first exposure to the kundiman was through her – through the lens of scholarship and the theoretical haze of academia. It was thus an enlightening experience, hearing these songs in the space of this story, and I walked out of Palma Hall with a renewed sense of patriotism, of activism.

The second time around, on the heels of one of the most trying election seasons of my life, The Kundiman Party was more a lifeline. They updated the dialogue to reflect the discourse and the language of the past few months, but most the songs stayed the same – a testament to the enduring power of our music and our poetry to speak to us, to speak of what it really means to be Filipino.

Props, of course, to the lovely Centenera-Buencamino, whose portrayal of the Maestra is grounded on a very real love for her craft and her country. Her Adela is both hopeful and realistic, and perhaps a little tired. During her monologue, I happened to sneak a peek at my mother, who was very subtly trying to wipe tears away. Later, she would tell me it reminded her of how it was, in the time of Marcos.

The strength of Adela’s conviction hasn’t wavered, ultimately, but has perhaps been tempered by the reality that this is the nature of man: to fight and then survive it, rinse, repeat—a time loop, a vicious cycle we haven’t quite broken out of. She has learned to make peace with it. But she’s also a diva, we mustn’t forget, and a whisper of activism is performative, too.

The Titas of Manila are recognizable in all the faces they put on: Tita Helen (a poignantly warm Stella Canete-Mendoza) finds strength in choice, Tita Mitch (played with a worldly charm by Jenny Jamora) verbalizes what we don’t want to admit in the face of the grandiose, and Tita Mayen (the equal parts comedic and cautious Frances Makil-Ignacio) approaches this with the baggage of history repeating.

Three out of three the original cast I saw, they textured this play so effortlessly, it’s impossible to imagine iterations of the story without them.

But it’s Gabunada who’s a revelation as Bobby. I first saw him in Ang Huling El Bimbo’s sophomore run, and the same frenetic energy in the provincial transplant’s Emman is here reworked to bring to life a character I know full well: the red, the ruthless, the angry. There’s an almost delicate internalization to his reading that manifests in the flexing of a hand, an accidental stutter, an intentional concentration founded on the desire to do well, or prove something. When his tears fell, I reacted instinctively, his corruption notwithstanding.

Ultimately, it’s this corruption that my take-home rested on: man is corruptible – there’s fear, there’s longing, here, a space to rest, cocooned from the outside world – but for as long as art – the kundiman, our literature, the roles we choose to play, the mythology we rework – speaks truth to power, there is hope.

“Kahit na sinag, ako’y bahaginan,” Nicanor Abelardo writes in Bituing Marikit, and just a hint of this imparts strength to fight on. – Rappler.com