‘Fur’ from the truth: Why you might sorely be mistaken about Filipino furries MANILA, Philippines – As I enter FurryPinas 2019 – the largest furry convention in the Philippines and, supposedly, in Asia – I leave my preconceptions at the door. (or, at least, I try my best to.)

Furries get a lot of flak. A fandom group whose primary interest is “anthropomorphic” animal characters or animals that take on human characteristics (think Mickey Mouse rather than Bambi), Western media has often relegated furry fandom as a sexual fetish. Shows like C.S.I. have portrayed the costumed community as akin to underground sex clubs, while documentary channels have shown the community as oddities for ogling.

Brian Uy, executive director of FurryPinas, addresses this misconception right away. He tells me that all fan communities have niche groups within them that sexualize their fandom. Anime, superheroes, video games, name it. It’s just unfair to generalize the furry community, he says.

He tells me that furry fandom is a lot more wholesome than people think it is. It’s even kid-friendly, especially here in the Philippines.

Brian is a “fursuiter,” meaning he’s the type of furry who expresses his fandom by wearing a full-body animal suit.

His “fursona” is that of a grey dragon named Tooth Less (loosely based on How to Train Your Dragon’s titular dragon). Today, though, he is not wearing any suit. He needs the mobility as he paces around the convention center, keeping everything running like clockwork.

Brian tells me how he got into the furry fandom.

“I heard mga 2008 sila [Filipino furries] nag-form ng Yahoo group. Nag-join lang ako when I was invited nun mga 2011. Nung time na ‘yun, actually mga 50 pa lang sila. So konti lang. (I heard it was around 2008 when they [Filipino furries] formed a Yahoo group. I only joined when I was invited in 2011. At the time, there were only 50 members. So they were just a few.),” Brian recalls.

Brian tells me how he now sees himself as a stronger person. He also considers himself successful – owning and investing in real estate while also working as a consultant for a FinTech company. He attributes this to his being a furry.

He tells me of other furry friends who no longer find themselves depressed. Others, he says, have gained direction in life because of the support system the furry community has given them. Being a furry has become a reason to live for many in their community. 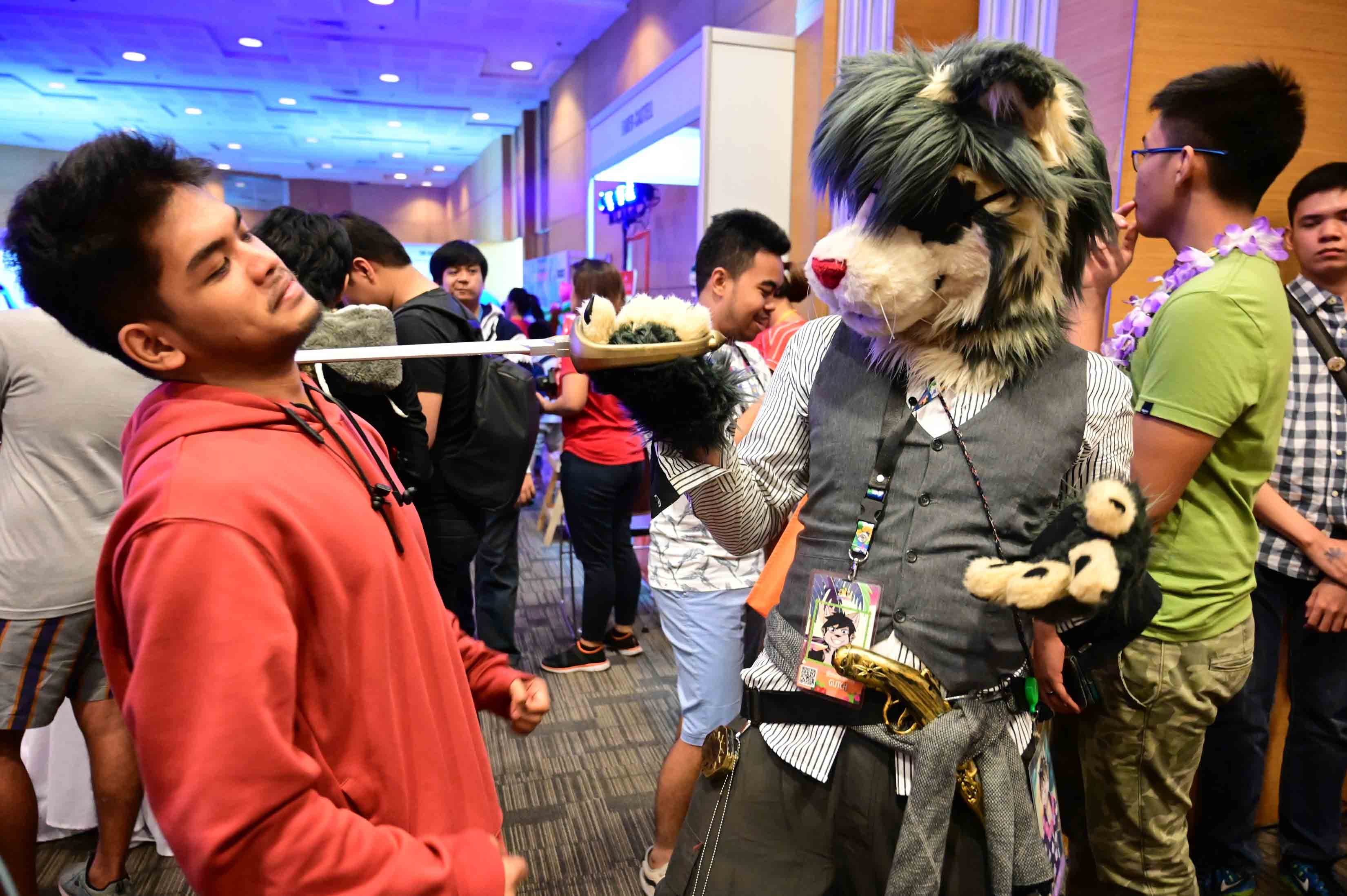 “I do this [FurryPinas] because I want others to have something they can look forward to, something that adds colors to their life,” Brain emphasizes.

It may not be my cup of tea, but I can empathize with Brian. There’s a sincerity in how he tells me how organizing FurryPinas is his way of reaching out to those who find themselves in the same place he was before. And beyond that, with FurryPinas, he wants to enable existing and future furries to feel the full extent of what it is like to be truly part of this community.

“I want to do it differently. In other countries, furry conventions are low-profile and are not as accessible to non-furries. Here in the Philippines, one of our missions is to really popularize furry culture. Because in my personal experience, the furry hobby – just like many other hobbies – helps you grow as a person, di ba?”

Contrary to what one would imagine, FurryPinas is not a sea of fursuits. Many roam the convention sans costume.

Young men and women are dressed mostly in hoodies or flannel. Some with matching graphic tees, some in beanies, others with streaks of bright color in their hair – the type you’d see in a university’s college of arts and design. You’d catch them doodling in corners, playing board games. Others though still bother to semi-dress for the occasion by simply wearing bunny or cat ears. 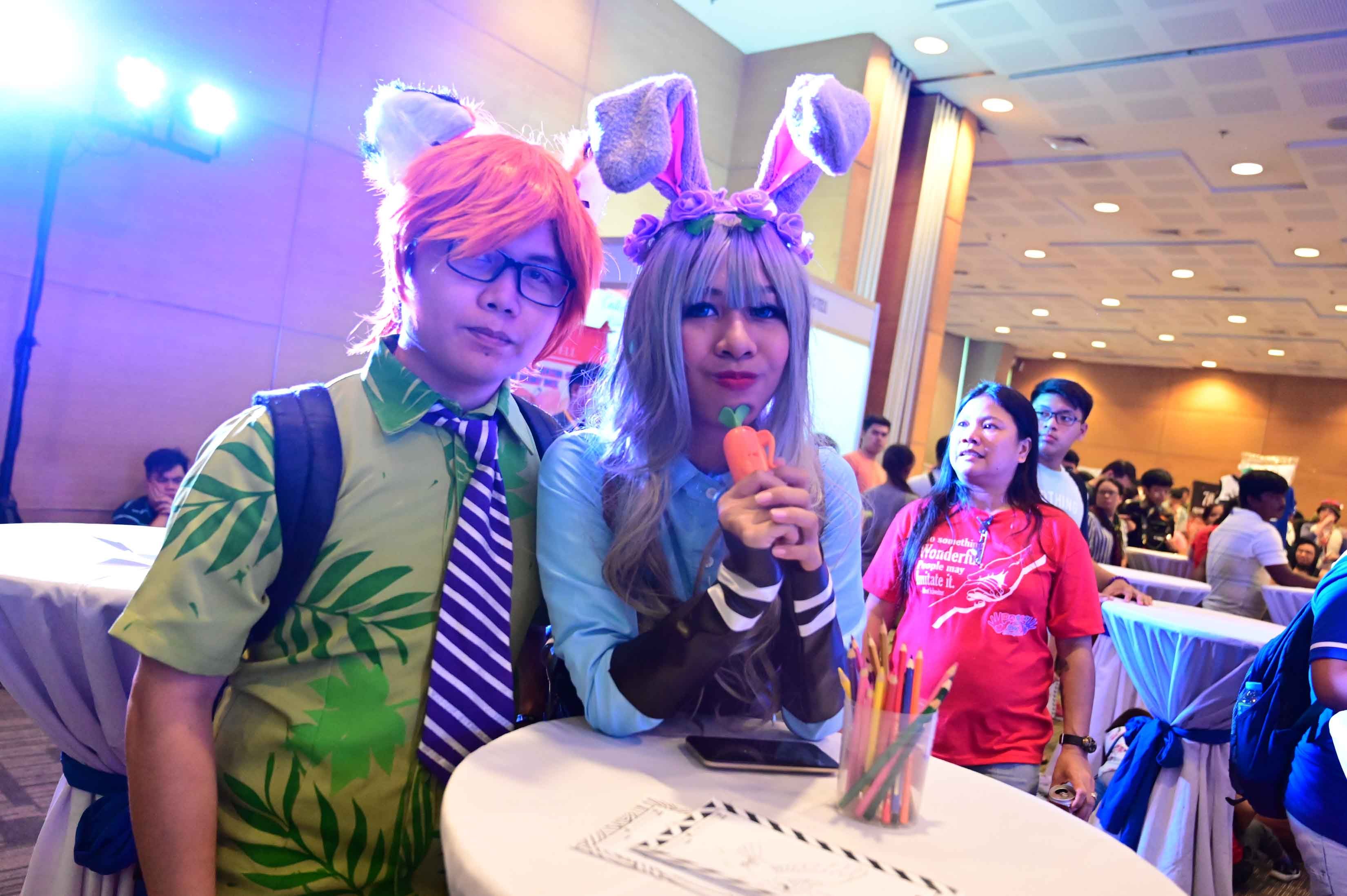 FurryPinas’ primary audience are mostly students and young adults, aged 18 – 25. True to the organizers’ goals, many of the convention’s attendees indeed don’t consider themselves furries. Some may be curious about the subculture while others would rather treat the gathering as closer to a comic book or cosplay convention.

For other furries though, the reason for not going all out in costume is purely economic. A full-on fursuit would cost between US$500-2,000, they say. Nevertheless, being a furry is more than one’s costume. For Assaundreal Yumerai, the lure of being a furry is in the creation of a fursona. Through the creativity he pours into his fursona, “he gets to show the world what he is made of.”

The Assandreal fursona is a black and white cat. The black and white, a yin and yang symbolizing balance, he says. He wants to serve as a “harmonizer” within the furry community. “My life goal is cheering up the sad furries around here.” 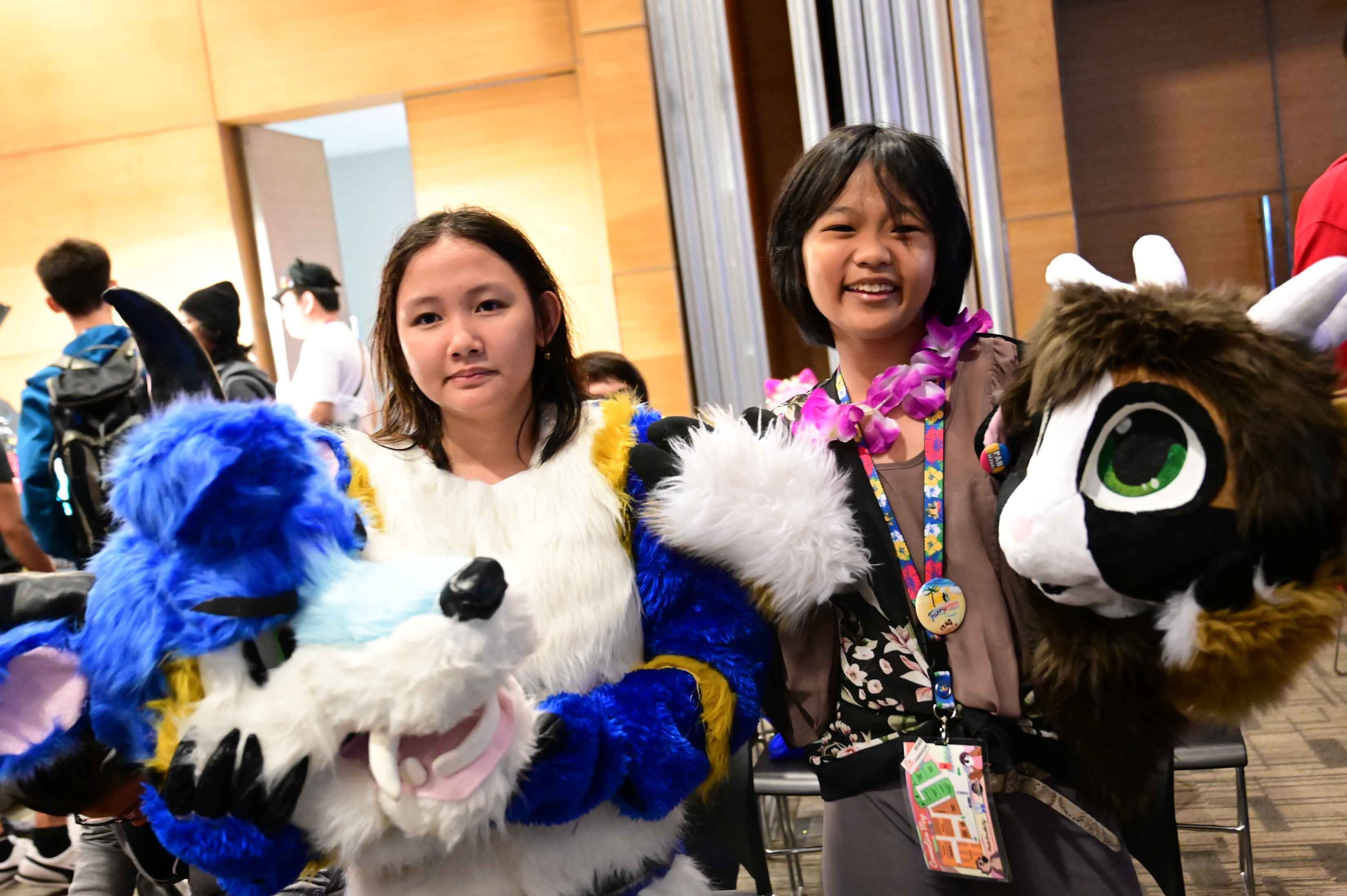 On the other side of the room, I see Dan and Phoebe. They are teens getting ready for their respective performances later in the day. Dan’s fursona is that of Ginger, a reindeer. Phoebe goes by Purrsuit, a “tamaraw hybrid.”

The two are ecstatic. For them, being a furry is showing their love for animals characters. “Just like Disney,” they describe it. It’s just made all the better with a community that understands them.

I see the semblance of how FurryPinas wants and tries hard to capture that same kind of “Disney magic.” Brian tells me that furry fandom is not as difficult to market in the Philippines as, in his words, “when parents and kids see fursuits they will say, ‘Uy, mascot!’ they think of the  cartoons and Jollibee.” 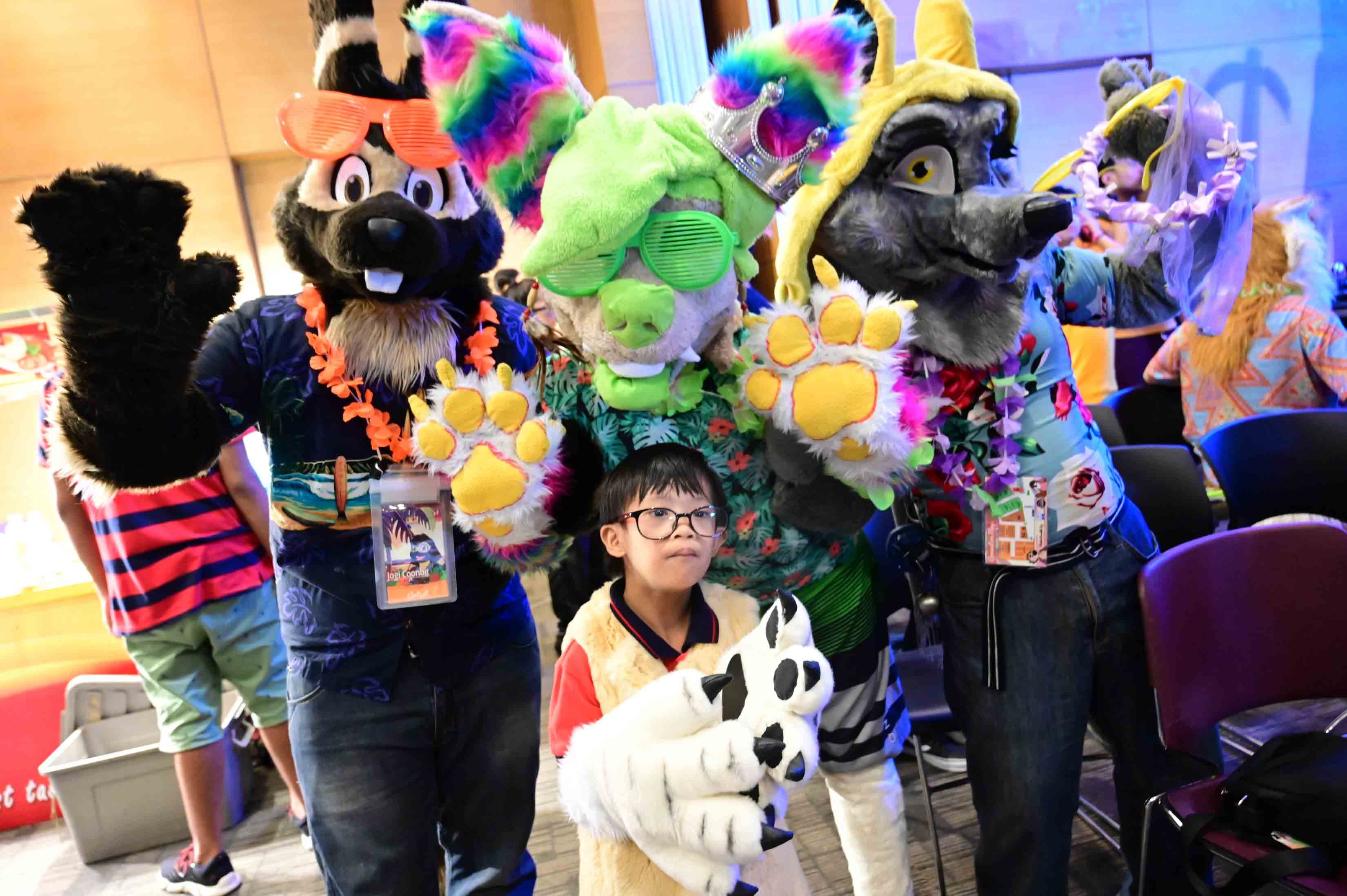 True enough, aside from students and young adults, a sizeable portion of convention attendees are children, many from Hands of GOD Charity Works (HGCW) – a volunteer group dedicated to helping differently-abled children. Part of FurryPinas’ proceeds goes to HGCW.

She tells me that they frequently invite the group as entertainment when they visit orphanages or hold benefit events for kids with cancer, Down syndrome, cerebral palsy, etc.

“We were partners in FurryPinas 2018, and we’re partnering again this year, and hopefully the next years. Kasi kahit wala pa nga yun FurryPinas, partner na namin si Brian Uy. (Even before there was a convention, we were already partnering with Brian Uy.)”

A community that gets you

We all long for acceptance, we all look for our “tribe.” After spending a day in FurryPinas, I see what pulls people into the furry community. It is a community that eschews judgment.

From everything I experienced, and through every person I talked to, it seems like everyone in the convention sees this fandom as a safe space.

For Brian, wearing a fursuit and a mask became his means of coming out of his shell. For Dan and Phoebe, they are kids that get to freely be kids. They can be wacky, wear costumes, dance to their heart’s delight without fear and instead be greeted with cheer. Rounds of applause are generously given in FurryPinas, and hugs are the furry community’s currency. Within the day, I saw a same-sex marriage proposal, a sign language teacher burst into tears after a performance of The Greatest Showman’s “This is Me,” and a drag performer own Bayanihan Center as if it was a runway. All through this, there were no second glances given, no rumblings beneath one’s breath – only warmth permeating the atmosphere.

And though can’t dismiss the existence of the “furry fetish” that has occupied popular memory (because it does exist and those looking just have to go to that one table in the convention), being a furry is indeed much more than that.

I’d like to bring things back to what Dan said. The furry community “accepts you because they are going (or have already gone) through what you are going through. Here, you can be really open.” – Rappler.com