This is how I cured my ‘straightness’

Jun 28, 2019 11:30 AM PHT
Luigi Gonzalez
Facebook Twitter Copy URL
Copied
'The reason I felt compelled to write this article was to remind the Pinoy queer community: love yourselves' 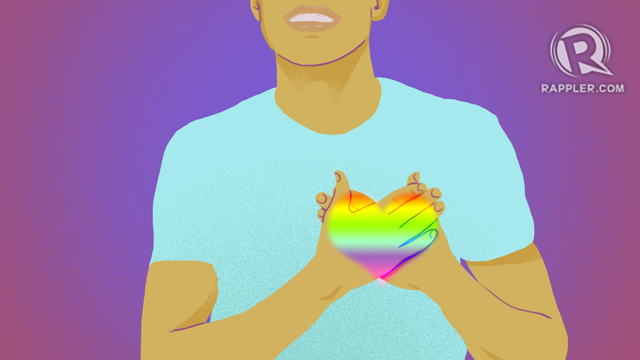 Recently, I’ve been seeing a lot of stories on my news feed from public figures claiming to have cured themselves of homosexuality, and I thought to myself, “Hey, that’s pretty impressive!”

See, making your sexuality do a complete 180-degree turn is not an easy feat. I should know. I went through a similar experience myself. Gather ‘round kids.

I’m about to tell you how I overcame my heterosexuality.

I’ve always known I was attracted to guys.

There shouldn’t be any confusion, really. Your body has a way of manifesting these things physically, know what I mean? It’s like a compass. That inherently wasn’t the problem, but in the years leading up to the first time my compass worked, I was brainwashed into thinking there was something wrong with being attracted to the same sex.

It was the late 80s to early 90s, so everything – right down to the toys I played with – was gendered. Boys played with this; girls played with that. Boys were this way; girls are that way. Boys grow up to marry grown up girls, and vice versa. You get the idea. It was then ingrained in me that just because I wasn’t like the other boys, I was somehow not normal, and I knew I had to do something about it.

So I figured, why not be straight?

My straight classmates all seemed comfortable in their own skin. Maybe if I did what everyone else was doing, I’d finally be comfortable in mine. It shouldn’t be too hard. I was a whiz at interschool co-ed mixers. Girls loved me. So that must mean I had some vestige of straightness inside this extremely gay body of mine. Only I didn’t know how to go about it, so I did what any good Catholic boy would do.

‘I turned to Jesus’

At a high school retreat, one of our activities was to purge ourselves of sin. We had to confess our deepest, darkest, most primal sin to a priest.

This was no normal confession, mind you. There wasn’t a dark booth with a mesh screen separating me from the priest. It was a well-lit room and the priest was about to have his morning coffee… like a person. There wasn’t even a place to kneel. I had to sit right in front of him – full eye-contact so I can see him judging me.

So there I sat, ready to spill.

“Bless me, Father, for I am sexually confused.” Wasn’t I adorable? I couldn’t even bring myself to say the word “gay.”

The priest stared back at me with the most vacant of expressions. Oh, God. I was going to have to say it, wasn’t I? “Father, I’m gay!”

First time those words ever fell out of my mouth, and he could tell. He shifted in his seat – so I knew he was going to say something important. “Son,” full eye-contact, “you are exactly the person God wants you to be.”

Now looking back, I probably should have taken that and lived my truth from then on knowing I wasn’t an abomination.

Calm down. It wasn’t my proudest moment.

Word of advice, if you ever find yourself even considering dating a girl to make yourself look straight, don’t! Just don’t. Women are not props. Maybe consider what would happen if she fell for the lie?

In my case, when it came time to take the relationship to the next step… Well, I’d be lying if I said it wasn’t like when Americans try balut on Fear Factor. It was embarrassing for the both of us, on so many levels.

Silver lining, at least it made me realize I wasn’t attracted to girls. But I still had a lingering pining for the slightest illusion of heteronormativity. Because once again, I equated validity as a man with masculinity – with acting straight. So now we’re going to discuss every gay Filipino’s favorite word…

I can’t speak for every gay Pinoy, but up until recently, I drew a hard line in the sand between myself and every gay man more effeminate than I was. I’d get a rush of relief whenever someone would point out how I wasn’t like the gays on local television. Because I wasn’t “That Type of Gay.”

Just sit with that for a second. Think about everything that implies.

There is no one gay people hate more than themselves. Because what we hate most in other people are the things we recognize in ourselves. We actively reject femininity because we equate it with weakness. We can’t help it. That’s what we were taught as a society.

This debilitating obsession with the masculine ideal is screwing everyone up. The masculine ideal is an unattainable goal, even straight men think so. Now, all of this is not to say the only valid gay man is one that’s fully queened out. But if you find yourself policing your own idiosyncrasies or punishing yourself for allowing your wrists to flail about, take a step back. You’ve done nothing wrong.

I don’t personally know the people who have claimed to cure themselves of gayness, so I can’t speak to whatever it is they’re going through that pushed them to say what they said. I also don’t know where they fall on the spectrum, so I’m definitely not invalidating whatever sexual fluidity they possess.

The reason I felt compelled to write this article was to remind the Pinoy queer community: love yourselves. Being gay is fun! I love everything about being gay: the music, the art we create and appreciate, our compassion, our wit, our history, and yes, every single man I’ve fallen for. Don’t ever let anyone take that away from you.

To paraphrase my high school priest, you are exactly the person you were meant to be, and there is absolutely nothing about you that needs curing.

Luigi Gonzalez is a screenwriter based in Los Angeles. His award-winning films have been screened in festivals all     over the world, including Outfest, the Cannes Film Festival Short Corner, and the CCP Gawad para sa     Alternatibong Pelikula at Video.