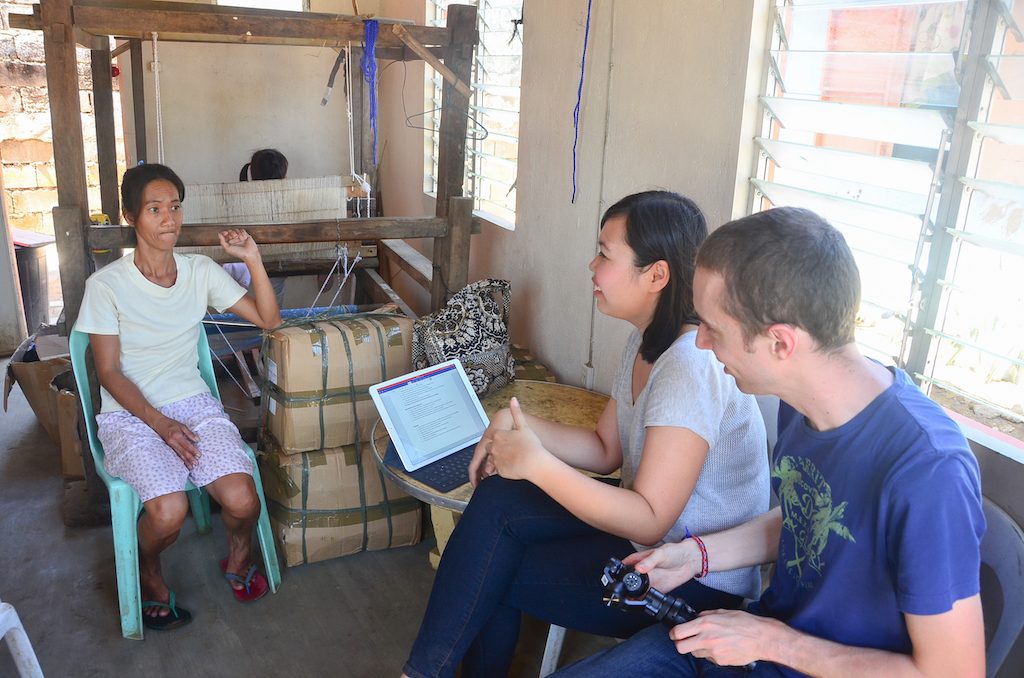 When Gelaine Santiago and Jérôme Gagnon-Voyer were planning their wedding in 2018, they both wanted to incorporate elements of their culture and family heritage into the ceremony and celebration.

Santiago was born in Bulacan, Philippines, but moved with her family to Toronto when she was 3. Gagnon-Voyer is a French-Canadian from Quebec.

Finding the right resources for Filipino weddings, was “a struggle,” said Santiago. Her family and friends didn’t have a lot of experience with Filipino weddings in Canada. “We had to rely on anecdotes about traditions that existed.”

While some information existed piecemeal online, the references were not established, said Gagnony-Voyer. “We didn’t see a single resource website that had it all. We could find some articles on some blogs, but some were written by non-Filipinos.” They did not even know where to begin in terms of writing a script for the wedding, recalled Santiago.

They eventually learned that traditional Filipino Catholic wedding customs typically include the lighting of candles to symbolize God’s presence, the placing of an infinity cord over the couple’s shoulders to symbolize enduring love and fidelity, the draping of one end of the bride’s veil over the groom’s shoulders to signify unity,  and arras, 13 unity coins blessed by the priest and presented by the groom to the bride as an emblem of their future.

Alas, no shop existed where they could buy the cord, coins and veil, and Santiago’s mother ended up having to borrow them from friends. After the wedding, the couple realized that their necessity had turned into an opportunity.  7 months later, they launched Sinta & Co., which bills itself as an online “(socially) conscious wedding boutique” offering Filipino wedding accessories, ceremony essentials, and practical planning tips “to help every couple incorporate Filipino wedding traditions into their big day.”

It was a natural progression for the couple who, in 2015, launched Cambio & Co., an online marketplace for fashion designed and handcrafted by Filipino artisans involved in social enterprise in the Philippines.

When they created Cambio & Co., Santiago and Gagnon-Voyer said they wanted to help create sustainable livelihood for artisans working with social entrepreneurs in the Philippines. They also hoped to “inspire Filipinos in the diaspora to feel connected to our community, to our roots, by being able to wear a piece of our heritage, or incorporate Filipino culture on a day-to-day basis.”

Sinta & Co. is an extension of Cambio & Co., in the sense that “we’re still trying to empower people to feel connected to their roots and culture through special events like weddings, instead of just day-to-day jewelry or bags,” said Santiago. “We are  still focused on craftsmanship and the stories behind the pieces.”

Sinta & Co. still has “the same mission, the same story, but just from a different angle,” said Gagnon-Voyer. Creating a sister company proved easier because by then Cambio & Co. was already thriving and “we already had a strong understanding of the landscape in terms of Filipino artisan communities as well as what it takes to really create an e-commerce focused on Filipino craftsmanship,” said Santiago.

Sinta & Co. aims to be a go-to-resource for those who are planning a wedding, not just in North America, but around the world, said Santiago.

Filipinos around the world are powerful in terms of their voice and spending power, but “we are such an underserved community in terms of our needs and our unique stories,” said Santiago.

Aside from selling wedding accessories, Sinta & Co. also has a wedding vendor directory of Filipino entrepreneurs, including wedding planners, calligraphers, caterers, officiants and others.

It envisions content that will cover not just the cultural and historical significance of certain traditions, but also contemporary Filipino wedding inspirations and real-life love stories. It will be an inclusive platform, so there will also be resources, for example, for  LGBTQ+ couples, Muslim couples and others, said Gagnon-Voyer. Asked how their own backgrounds prepared them for their two companies, Gagnon-Voyer said  that with his IT background he had worked with large and successful e-commerce brands; Santiago, had been involved in corporate marketing.

With these work experiences, they and their friends thought they had it made. But starting a business from scratch, with zero customers, was a steep learning curve.  “We had to rely on ourselves to do everything, to learn about finance, advertising and all kinds of marketing. We sacrificed our personal income in order to invest more into the buisness,” said Gagnon-Voyer. Their own families, he pointed out, didn’t come from money.

“We started with zero. We didn’t know anyone in the Philippines aside from my family who isn’t connected at all to the social enterprise network,” said Santiago. “It really felt like we had to hustle hard in terms of contacting people on our own and doing cold emails and messaging people on Instagram. We were really lucky that people were willing to talk to us early on.” Santiago said the idea of inspiring Filipinos to be connected to the Philippines wasn’t part of their initial core mission for Cambio & Co. She had grown up in Canada and didn’t learn to speak Filipino because her parents encouraged the family to assimilate in their new home.

The idea for Cambio came after a visit in the Philippines in 2012,  her first since she left at 3, and Gagnon-Voyer’s first time ever. They learned about Filipino social enterprises and thought it would be “a cool idea” to have a marketplace to showcase Filipino craftsmanship, while helping others. At that point, they were also unhappy in their jobs and wanted to do something meaningful.

“Cambio itself was a cultural journey and it’s only been in the last 3.5 years that I’ve been learning about the Philippines,” she said. “I feel much more rooted in terms of my own identity and that only came as a result of starting Cambio. The story of Cambio has evolved at the same time that my own understanding of my Filipino identity has evolved, too.”

Becoming a social entrepreneur, said Santiago, has taught her “the importance of really owning your story and really not being afraid to say no to everything else that doesn’t matter.” When they started Cambio they had envisioned a 100% Filipino marketplace, but people told them it was not a good idea. They were told Filipinos are not willing to pay for products made in the Philippines. They listened and for the first two years, Cambio (then called Cambio Market) also sold products from artisans in India and Guatemala. The couple eventually realized a global marketplace wasn’t what they were passionate about and so in 2018, they rebranded Cambio and decided to exclusively sell Filipino products. Their decision paid off, the company grew and they “deepened” their relationship with their partners and clientele, said Santiago.

This experience not only taught her “how to say no and cut out all the noise,” Santiago said, but also to have conviction. “People will be passionate if you’re passionate.”

Gagnon-Voyer said he continues to “learn and re-learn” the potential that exists for cultural products from the Philippines. When he went back, on his own, to the Philippines in April after having been invited by the Department of Trade and Industry to attend a fair for Filipino artisans, he said he was “amazed” at the range and quality of products.

“There’s such a big gap in terms of the ability to export those…Everyone seems to be missing that opportunity…I wish we were already 10 times bigger than we are right now so that we can increase our impact,” he said. – Rappler.com