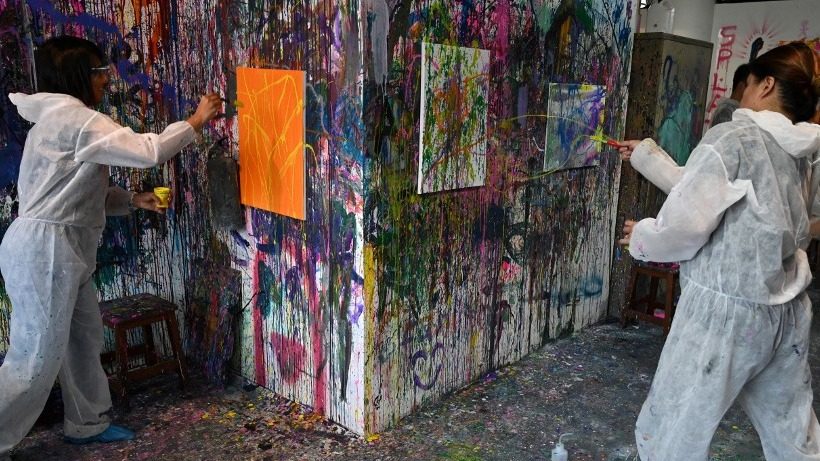 SINGAPORE, Singapore – Singaporeans dressed in overalls squirted paint onto walls and canvases using water pistols and syringes at a new pop-up art studio where people get messy to relieve stress.

For SG $39 (about $28), guests at Splat Paint House get a package including canvas, paint, gloves and overalls.

There are no rules and no time limit – people can keep going until they run out of paint, and let themselves loose on the walls when their canvas is full.

The studio has been compared to “rage rooms”, where people can vent their anger by breaking objects.

But its founder Andrea Lim wants her clients to leave with a beautiful creation that they can proudly display in their homes.

She was inspired by a friend who converted a spare room in his warehouse into a paint studio while she was studying in the United States, and started the project when she returned to Singapore.

“A lot of people come with almost like a fear or a belief that they can’t really do art,” she said.

“I want them to come, just have fun, and realize that you can actually create something quite beautiful with very little effort, or while just messing around.”

Emil Bianii, 20, spun around, jumped and ran at her canvas while using her hands to throw streaks of blue, green, and orange paint.

“I think this is a fabulous and genius way to… de-stress, get your mind off the world,” she said.

The pop-up studio will run until October, after which Lim will consider looking for a permanent space if it is financially viable. – Rappler.com

De-stress by creating art! Get your art supplies with this Galleon coupon.