Viet, a professor of English, American Studies, and Ethnicity at the University of Southern California is probably best known for his books The Sympathizer, which won the 2016 Pulitzer Prize for Fiction, and The Refugees, a compilation of stories from Vietnam, where he is originally from. During a panel discussion on August 3, Viet talked about the Vietnam war, Filipino-American authors, and Asian representation.

Here’s what we learned from the forum:

When he was doing research on the Vietnam war, he watched the highly-recommended Apocalypse Now.

“The first thing they would say to me is have you seen Apocalypse Now. And this would be coming from Communists,” Viet said.

“Communists who opposed the United States. This happened when he was interviewed in Italy by a Communist radio interviewer [who] did not like American imperialism but loved Apocalypse. And so that was a symbolic moment that represented what I went through as a child in the United States.”

Life after The Sympathizer. “When you win a Pulitzer, you become rich,” he joked.

“It had a huge professional, personal impact and gave me the opportunity to come to Manila to speak to all of you, so I’m very thankful for that. But the negative side of winning the Pulitzer is that I did not write fiction for a year and for a year, I was completely stressed out. I didn’t feel any joy in winning the Pulitzer, because people keep asking things of me…I think it’s only been the last couple of years of the reality that the Pulitzer has sucked out of me that it’s a prize that means a lot to me but it also means to a lot of people. So, with these people all over the world, take pride in me winning an American literary prize.”

“And we share a long liberate problematic relationship with the United States, but it continued even after our independence from the United States. In your case, independence was granted but the US also maintained military bases here for many decades. I arrived on an American military base in 1975 freed from Vietnam, I remember that. And in the case of Vietnam we still in many cases are intertwined with the US afterwards because of global capital arrangement that kept the US involved.”

“So, that was another reason why it was so ironic and an opportunity to have a section of [the] Philippines in The Sympathizer. I did not have to make it up. That history exists because of shared colonization.” 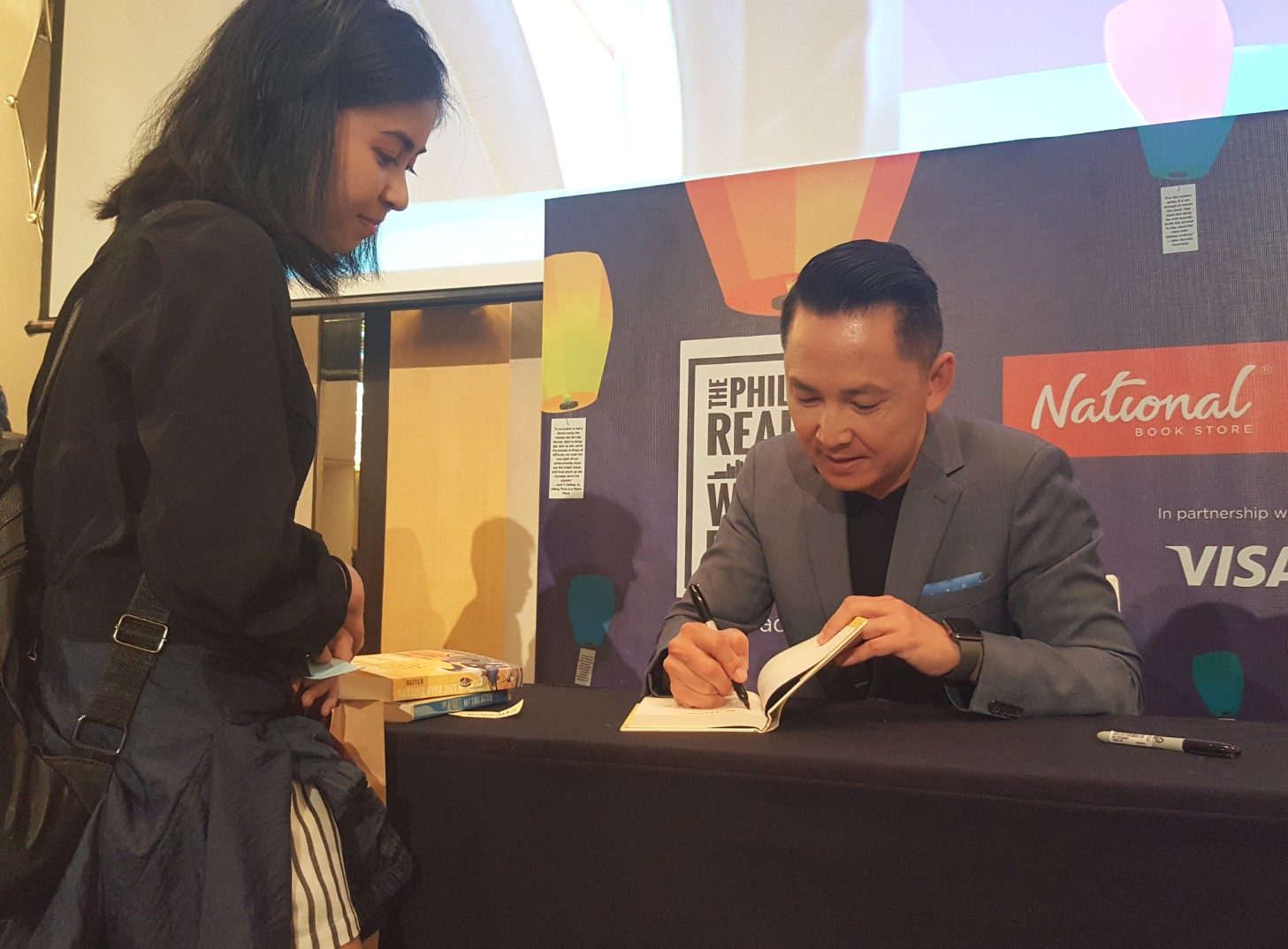 His next book. “So, my next book is a children’s book. It’s called Chicken of the Sea. It’s about chickens who are bored with life in the farm and brought up to become pirates. Let me just say that I did not come up with this idea. My 5-year old son came up with this idea.”

According to Viet, the inspiration came about when he took his son to an art convention. He make a comic book called Chicken of the Sea and posted it on Facebook, then an editor saw it. The book is set for release in November.

Viet also said that he’s working on a sequel to The Sympathizer.

Food in The Sympathizer. “One context on why I’m saying that is in the United States when it comes to writing about Asian Americans, we often write about food and we’re expected to write about food. And the reason why is because food is one of the easiest ways to understand cultural differences. If you look at the history of Asian immigrants in the United States we’ve gone through the progress, you’ll find that in the 19th century Americans had no idea what Asian food was.”

“And when they found out about Asian food, they thought it was disgusting. And now we reached the moment where in Asian food is hot. Filipino food is the newest and hottest ethnic food in Los Angeles. So, consuming one’s food and explaining your own food is a way of helping different cultures bridge their differences.”

Are the Asian communities finally telling their story, from their own point of view? “That’s definitely true. I think there’s always that impulse if your voice and your story is not heard to come out with your own stories and make you voice heard. And it’s been a lot of struggle in the United States, it is still a struggle in the US for populations that are minorities or unrepresented or marginalized in some way to have people access to the means of production and representation to get their stories out there,” he said.

“Now what does that actually mean though? It means that you talk about Asian American as an example, we are in an interesting moment where in Asian Americans are producing a lot of books… [it used to be] that 20, 30 years ago, one book about Asian American was a landmark. It only happened once a year, once a month. Now, it’s literally about a week or more that Asian Americans are producing. So that’s good. Is that enough? No. The problem is that it’s easy in the United States. I don’t know if it is true for here to mistake representation for equality or to just have more voices out there, if we have more elected officials, if we have more movies that were about us that is our equality.

“That’s why I kept saying that representation matters. Now representation matters but that’s not enough. Because if I have me, I’m using me as an example, as an author who won the Pulitzer Prize is that a step forward for equality? Yes, but the publishing industry in the United States is still 87% white. That’s where the real power lies. I am just a commodity. I am an important commodity, but I am just a commodity.”

“The real power lies with who owns the means of production and whose money is running behind the scenes. So that’s why true equality is only partially achieved if I have more stories, more voices, more representation. True equality is fully achieved when we have equality throughout society which means economic and social equality which is much harder to achieve.” — Rappler.com