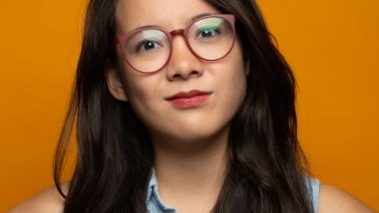 In a surreal landscape on the border between dream and reality, we follow the journey of Marsha Gates, a young college student who has lost her voice. On her way to speech therapy, Marsha meets Professor Claudia Mitchell, who captures the most captivating catastrophes of the world and preserves them in a sandalwood box.

“Being casted as Marsha Gates has been such a wild ride for me,” said Dorothea Gloria. “It’s about a young girl’s existential crisis and how she deals with it which I find very true for myself as well.”

Gloria says that the audience members will be faced with very serious life questions. She promises that the show aims to boggle the mind and keep the audience questioning about how their own lives work.

“I am very lucky to be collaborating with such generous directors and cast members. It is a hard script to interpret but I am surrounded with people that have such a strong sense of play and discovery,” she said.

“We constantly divulge what the script has to offer as we flesh them out through our own understanding and experiences as human beings.”

Excited to perform this to an audience, this will be Gloria’s first show with the Flea Theater, a Drama Desk Awardee for Commitment to Adventurous Theater. The Flea Theater was founded by Jim Simpson, Kyle Chepulis, Sigourney Weaver, and Mac Wellman.

The Flea Theater invests in risky plays that wouldn’t be produced elsewhere. Their stages are always filled with new plays that are focused on urgent stories that reflect the world around us.

“It is a thrilling show to work on and I cannot wait for the New York audience to see this,” she said.

Gloria’s last show in the Philippines was Palasyo ni Valentin directed by Nonon Padilla. She played Diding, the lover of Valentin, who was played by renowned actor Ricky Davao. Gloria won Broadway World’s Best Featured Actress in 2014 and Manhattan Repertory’s Best Work in 2018.

The Sandalwood Box runs from Sept. 26 until November 1 at The Flea Theatre, located at 20 Thomas Street, New York. Ticket prices start at $37.