Bartending in the Philippines, according to a PH champion Marinel Paguia nods and smiles from across the bar – bottles, tin shakers, glasses, and skilled hands at the ready.

On cue, the 25-year-old bartender whizzes back and forth, reaching for various bottles of liquor from above and beyond without a moment’s pause, every bottle thrown into a sky-high spin and multi-flip with one hand and saved by a smooth catch in the other, coupled with a celebratory smile. 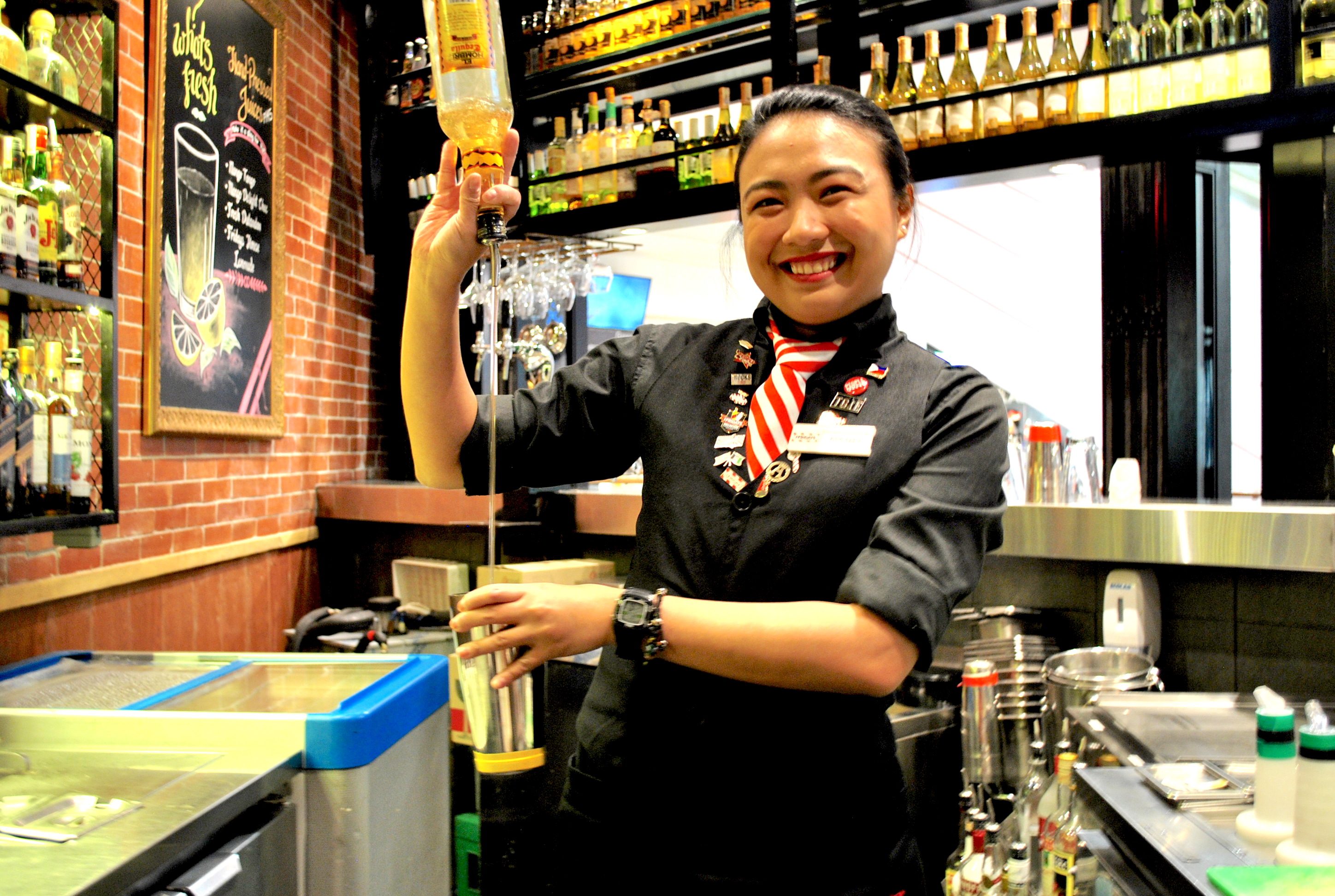 With the bottle of tequila in her hand, giddy Marinel gives it another flip, attempts a risky 360-degree turn, catches it from behind her back, and seamlessly begins to pour a 3-foot stream of sobriety’s worst nightmare into a tin shaker in the other hand.

She quickly seals the tin shaker – a flip again – and gives it a quick shake. Another twist, another throw, another catch, another steady, tall pour of liquor and a squeeze of lime juice, and suddenly, mid-trance, your freshly-made margerita is now being gracefully poured into a salt-rimmed cocktail glass in front of you. 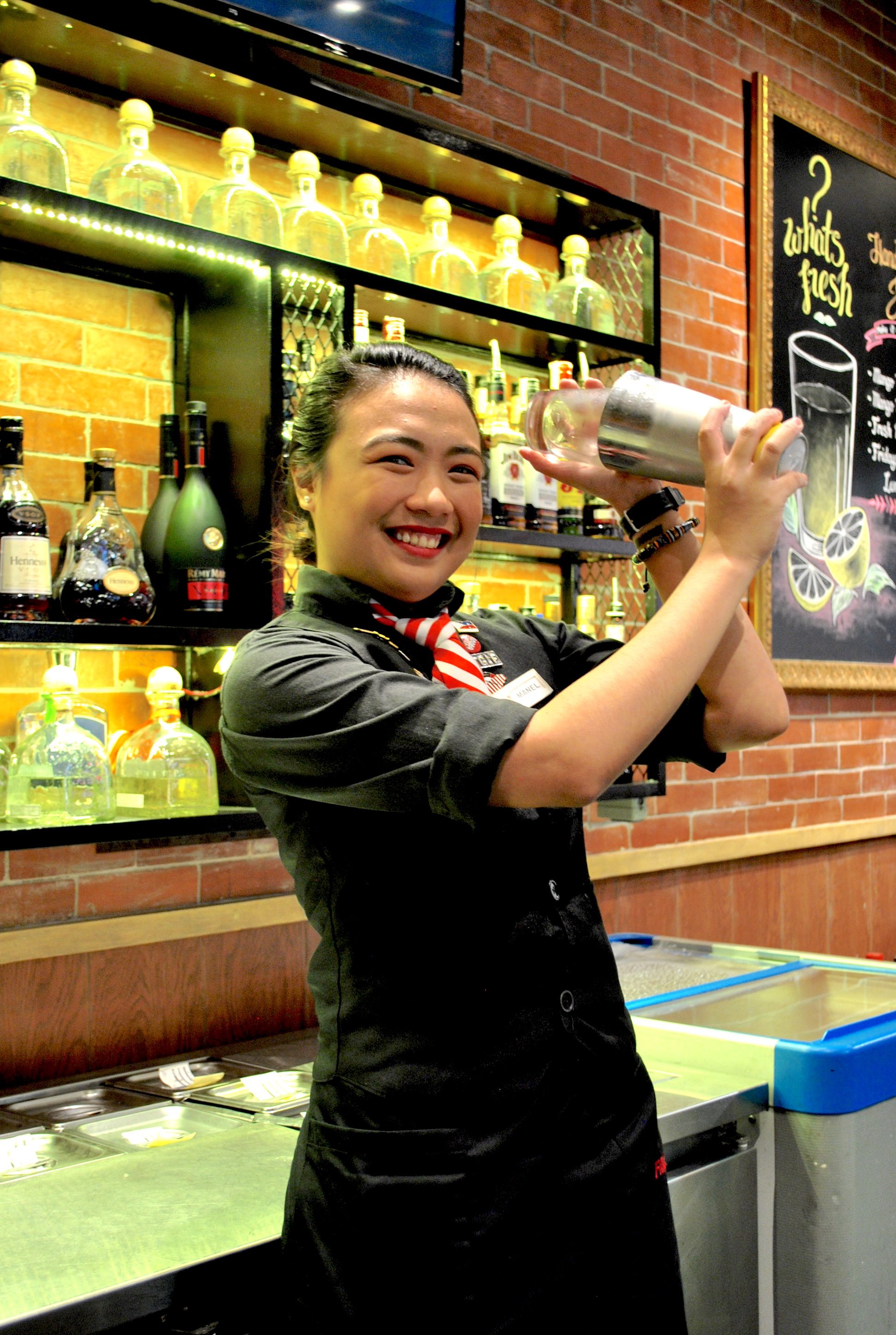 Customers don’t just come for the drinks – they’re also here for the skill and flair, which is all in a day’s work for Marinel, TGIFridays bartender and the Philippines’ 2019 bartending champion.

Putting the ten in bartender

Aside from her day job as a bartender for TGIFridays Glorietta 3, Marinel Paguia is also the restaurant’s Asia-Pacific Bartending Champion of 2019, besting other Southeast Asian competitors last October 23 in Jakarta, Indonesia. With her winning plaque, $1000 US dollars, and a thirst for victory alcohol just can’t quench, Marinel is set to represent the Philippines, competing at the global finals in Tennessee, USA in March 2020.

How did she get to champ status? When it comes to bartending glory, there are no bar exams – just tons of courses, training, competitions, and a whole lot of practice.

“I started as a bartender 5 years ago here in TGI Fridays, and then moved my way up to be a bartender coach for new hires and then a bar tour speaker. I hold seminars on flaring and bartending to aspiring students,” she said. It was in 2016 when Marinel began competing with other Fridays representatives nationwide. After two years of not making the cut, she finally won the internal competition in 2019 against 25 other Fridays bartenders, gaining her a prestigious spot in the Asia-Pacific competition.

‘What guys can do, girls can also do better’

According to Marinel, bartending is admittedly a male-dominated profession – and she used that fact to gain an edge in the industry. “Ang galing kasi ‘pag yung babae yung nagbabartend,” she said. (It’s amazing when girls bartend.) For Marinel, it’s important for a female bartender to set the bar high – pun intended.

“Usual na sa kanila yun eh. Pag ung babae ung nag flaflair or nagbabartend – parang mas winewelcome talaga nila with open arms,” she said with a smile. (It’s usual for men to do that. But if it’s a woman who knows how to flair or bartend, they usually welcome us with open arms.) As expected, Marinel’s pre-competition training process was rigorous, time-consuming, and wracking, both for the nerves and the brain. “I had to memorize all top 65 Fridays cocktails and drinks, because any of those could be assigned during the competition,” she explained. On top of memorization, Marinel also had to choregoraph her own “flairing” performance to go with her cocktail craft. Flairing is how bartenders entertain their guests using the creative manipulation of bar tools, such as tricks with cocktail shakers, liquor bottles, utensils, and glasses. They’re “modern-day jugglers,” some might even say. Mix in one part grace under pressure, another part thinking on your feet, a pour of focus, a splash of speed, a sprinkle of stage presence, and a glass rimmed with accuracy, and you’ve got yourself a winning cocktail.

Hit me with your best shot: How bartenders compete

Fridays’ bartending competition begins with the compulsory round. This set of skill tests include:

Only 8 contestants make it to the next stage – the freestyle round – which involves both skill and creative flair.

No booze, only cheers: That winning moment

When Marinel’s name was called out on stage as the winner of both the compulsory and freestyle rounds, she recalled her winning moment with a laugh, remembering how she stood frozen on stage, confetti flying around her. She remained completely dumbfounded after hearing her name as this year’s champion. Until now, she still can’t believe it – but it was believing that got her here in the first place.

“Nung nanalo ako sa Philippines, sini-sink in ko na sa sarili ko na mag-cha-champion ako. Law of attraction yan eh,” she said. (When I won in the Philiipines, I let the thought that I would be champion really sink in. That’s the law of attraction.)

“Dapat walang negative vibes and thoughts. Syempre ako, nag-prapractice ako, so in-eexpect na mananalo ako. ‘Di ko sine-set aside na magagaling mga kalaban ko kasi magaling talaga sila. But I just focused on myself,” she added. (There shouldn’t be any negative vibes and thoughts. Of course, I practiced, so I expected to win. I’m not setting aside that my competitors were good, because they really were. But I just focused on myself.)

Behind the bar: The best and hardest part

For Marinel, the victory was just the cherry on top of her bartending journey – what gets her up each morning is what she considers the most challenging but the most fulfilling part of her job – the people. “It’s both difficult and easy – dealing with other people, the customers. You get to know a lot of people, especially those who sit by the bar. That’s why it’s important to know how to read your guests,” she said.

This is Marinel’s secret – turning this challenge into a goal. “This is my way to create regular relationships in our store. I like getting to know everyone, because it’s my priority to engage with our guests,” she added.

Your whiskey is my command

No wonder Marinel’s nickname at Fridays is “The Genie” – a nickname required for all TGIFridays bartenders, and a moniker coined by her very first mentor and inspiration, Sir Castro.

“He called me the ‘genie,’ because I will really make the drinks of your wish,” she said. “Our guests are our masters.”

As a bartender, Marinel shared one common misconception about her profession: that flairing is a “waste of time.”

“At Fridays, once you make your drink, you should make it with flair. That is the essence of being a good bartender. Everytime, you flair – kahit simpleng flip of glass or a tin can,” she said. Apparently, some customers think that flairing slows down the service of your drinks. According to Marinel, this isn’t true.

“It’s the same speed, the same ingredients, just with flair. Flair is there to entertain the guests; it doesn’t not make the process slower.”

“For you to become a Fridays bartender, you should be confident and competent,” Marinel said. 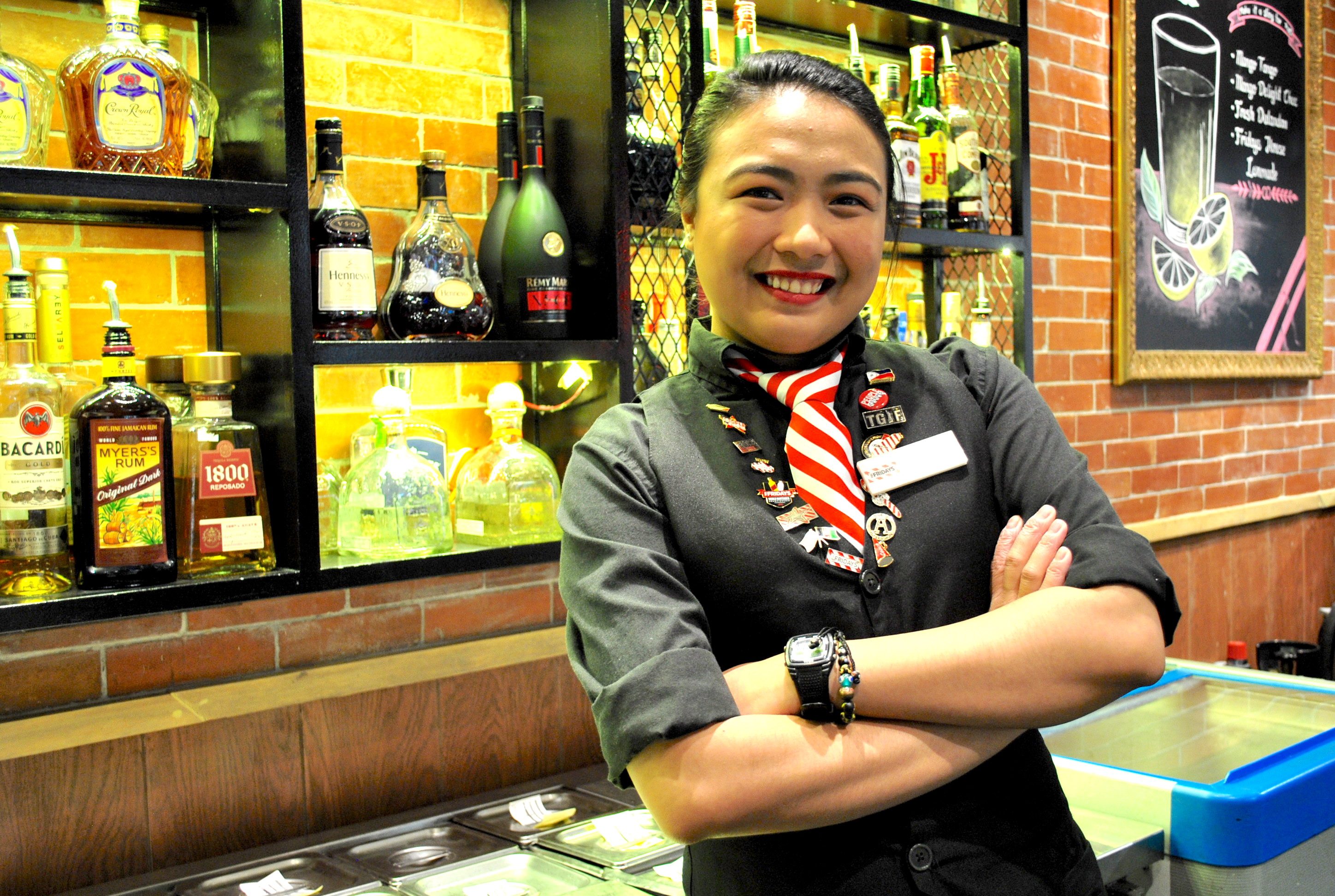 It is also a mistake to think that learning stops once you’ve graduated, Marinel said. Being a bartender requires a lot from you – knowing how to adapt fast, think quickly, and to stay calm amid a rattled mind. To Marinel, being rattled is the bane of any bartender’s existence – because once your mind is rattled, so is the recipe.

So you want to be a bartender?

Bartending is no joke, despite the glitz, glamor, and romantic meet-cutes films and TV shows portray the profession to regularly have. It’s a career built on practice, skill, time, effort, people skills, and a lot of grit. “For those who want to be a bartender, once you dream, you have to dream with your all,” Marinel said.

“Merong iba na ‘gusto ko ‘to,’ pero pagka-experience ng downfall sa buhay, umaayaw agad. Dapat hindi ganon, na basta basta lang mag-give up. God has his great timing,” she added. (There are those who say ‘I want this,’ but once they experience life’s downfalls, they quit right away. It should’t be the way, just quitting. God has his great timing.)

Just take Marinel’s experience for example – it took her two years of practice and failure to get to her year of success.

“Nung dati, sabi ko, ‘ayoko na.’ Di pa nga ako pumasok sa freestyle round,” she recalled. (Before, I said, ‘I quit.’ I didn’t even make it to the freestyle round back then.)

“Siguro napagod lang din ako kaya sinabi ko yun. Pero ginawa ko padin. I gained my confidence back. What was my goal? I just reminded myself of it – that I wanted to be a world bartender champion,” Marinel said.

“But if you love what you’re doing, you’ll never get tired.” – Rappler.com