BAGUIO CITY, Philippines – Among Baguio artists, Ben-Hur was the Villanueva who decided to leave behind.

It was his younger brother Roberto who was the wanderlust wunderkind. Roberto was among the founders of the Baguio Arts Guild and Café by Ruins. A shaman, Roberto went around the world and in the spirit world, making ephemeral art and performance art. The rare times he went into visual art, they were huge like a labyrinth, a mosaic of seeds enough to feed a community and a painting as huge as the ceiling of the Baguio Convention Center. Panhumuko, his installation to appease Mt. Pinatubo, was as huge as an Aeta pueblo.

Ben-Hur had a more subdued arts career. Born in San Mateo, Rizal in 1938, he studied in Manila and Quezon City for his basic schooling and took up fine arts at the Philippine Women’s University. In 1961, he began to teach art at Ateneo de Manila Grade School for 30 years.

”While teaching in the AGH, Villanueva was also active in various art activities in arts and design, joining local and international exhibitions and competitions such as the 1971 7th Biennale International in France, the 1975 7th Segunda Biennale de la Habana in Cuba, the 1988 International Conference for TV Programming in Japan, and the 1989 World Annual Arts Festival & Conference in Finland,” wrote his student, John Paul Lakan OIivares, in his tribute blog post, “Sculpting Futures.”

Printmaker Pandy Aviado wrote: “He was a great art teacher. Among his students were Noynoy Aquino and Arch. Bong Recio. He was also a good sculptor. Along with Mrs. (Araceli) Dans, he made puppets for an Art program of the Educational TV, way ahead of Sesame Street. He was also a great boogie and chacha-cha dancer.” In 1992, Ben-Hur retired from Ateneo and decided to migrate to Baguio to be with his brother. But Roberto became ill in 1994 and died in 1995.

Desiree Caluza, a writer now based in Canada, recalled when she talked to Ben-Hur about his brother.

“It was his anecdotal life that Ben-hur fondly recalled.’Oh, Robert told me his unforgettable experience on this particular island in Palawan. There were this beautiful sea and rich trees around. He was so carried away with the beauty that he saw that he suddenly had to undress himself to be totally naked, he said he wanted to be one with nature so he marched towards the water and just swam,’ Ben-hur said with animation in his voice.

“‘Oh, and he also loved butterflies, he saw many of them in the island,’ he added. The last minutes of Robert’s life in his death bed became a sterling bonding for both brothers. Ben-hur was there to help release Robert’s spirit. ‘I held his legs and feet, and massaged them, and then I told him to spread his wings and fly,'” Caluza said.

After Roberto’s death, Ben-hur started sculpting in earnest. His brass figures ala Solomon Saprid became more Cordilleran. They seemed floating or fighting in the air with bases mostly in river stones. He held one-man shows at Christine Gallery and many of his first patrons were his students, who remained in awe of him.

In 1998, he opened his museum, Arko ni Apo Gallery in Long-long at La Trinidad beside Tam-awan Gallery back when Bencab was still at the helm.

By that time, his son Bumbo was also starting as an artist. First following the footsteps of his uncle, Bumbo later became a sculptor like his father, although his works are more honed on mystical themes.

“The Arko ni Apo Gallery, an art space which he established in Baguio, was a testament to Ben-hur’s openness to the Baguio community which he and his family embraced. The gallery was also his workshop but it was also a dining area for ‘eating occasions.’ The gallery was always open to anyone who was interested to talk about art, spirituality, and life as a whole. And Ben-hur and the whole family made sure that all visitors felt accepted and comfortable,” wrote Caluza.

Benhur’s first major sculptural artwork is Ang Mandaragat, which he made in 1981. It was the grand prize winner of the Metro Manila Beautification Competition then sponsored by First Lady Imelda Marcos.

In 1998, Benhur’s design for the statue of Andres Bonifacio to be erected at the Bonifacio Global City was chosen over 19 other designs. His three-meter Ang Supremo with Bonifacio facing the sky, Inang Pilipinas at his back with a flag and a young Katipunero with a sharpened bamboo stake protecting him, remains his most famous work.

The Builders was commissioned by the Baguio Centennial Commission in 2009. It depicted the Filipino, Japanese, Chinese, and Americans who built Kennon Road and the city as they try to pry a huge boulder. It was unveiled at the Baguio Botanical Garden during the 100th anniversary of Baguio in September 2009.

His other major works are the Risen Christ (1996) in front of the Transfiguration Chapel in Nasugbu, Batangas, with the Redeemer escaping from his death robe and leaping to Heaven.

This is symbolic because Ben-Hur was named after a fictional character of an 1880 novel by Lew Wallace, which was later made into a popular movie in 1959 with Charlton Heston in the lead. Ben-Hur was a Jewish prince who was enslaved by the Romans and became a charioteer. He later met Jesus and became a Christian.

Despite his artwork dotting the archipelago, Ben-hur remained rooted in his Arko ni Apo. He became in his later years, more of a teacher to young sculptors and a civic gadfly. He was outspoken about the rampaging overdevelopment and deteriorating culture of Baguio. 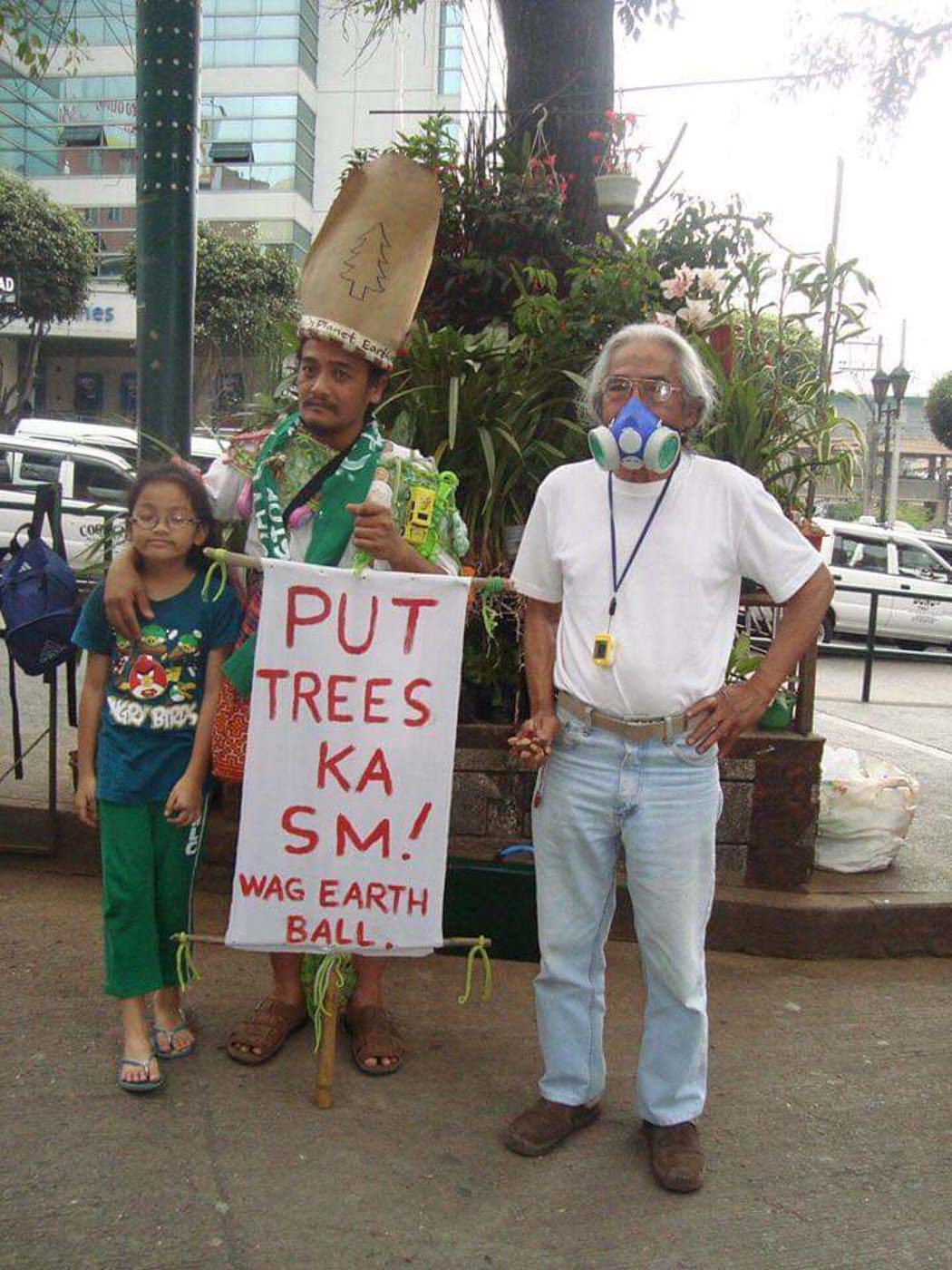 “Napakaraming magagandang kuwento ang tatay namin tungkol sa ganda ng buhay at kung gaano tayo kamahal ng ating Lumikha (Our father had so many great stories about the beauty of life and how much our maker loves us),” Bumbo said.

“Laging zero ang paycheck sa tuwing darating ang suweldo dahil sa dami namin ay ubos ang kanyang kinita sa bale pa lang. Isang araw namomoblema siya na wala na kaming pagkain hanggang sa may humabol sa amin sa gate at sabi, “Lakay, may isang kabang bigas ka.” (Always zero paycheck even before payday because there were so many of us. One day while having problems on where to get food, someone reached to us at the gate and told us, Lakay, I have a cavan of rice for you),” he added.

“He was always a teacher,” said Kigao Rosimo, one of the few sculptors in the city whose medium is not wood. “The knowledge he has shared will forever be cherished.”

Last Saturday, Kigao went to Arko ni Apo to invite Ben-hur and son to join the art exhibit he’s curating and found no one in the ark.

At that time, Ben-hur was back in San Mateo surrounded by his wife Lolit and his family. His last words, according to daughter Bedette, were filmic: “Magpapahinga lang ako, Santo Kristo.”