The Art Fair, ostensibly a “clearinghouse of artworks where galleries, dealers, curators, and collectors are actively engaged,” has become so much more than the commerce taking place in it. (READ: All the new things you can expect from Art Fair Philippines 2020)

It has made visual art accessible to the general public – from collectors to enthusiasts, and even just the casual visitor — right in the center of Makati’s bustling business and shopping district. (READ: Why art fairs matter even to non-artists and non-collectors)

This year’s run from February 21 to 23 inaugurates a new section for cinema: ArtFairPH/Film, only two years after first including photography in the program.

With 61 galleries and spaces in the venue, around 70% of the participants are locally based, according to the organizing committee, but there is also an international presence – including a cultural exchange project with the Italian embassy and the Galleria Tiziana di Caro from Naples, among others.

There’s so much to see this year, but here, we highlight only a few of the pieces and exhibits which we think can immediately draw the attention of all visitors – as well as those obscured by the walls and corners of the labyrinthine fairgrounds. 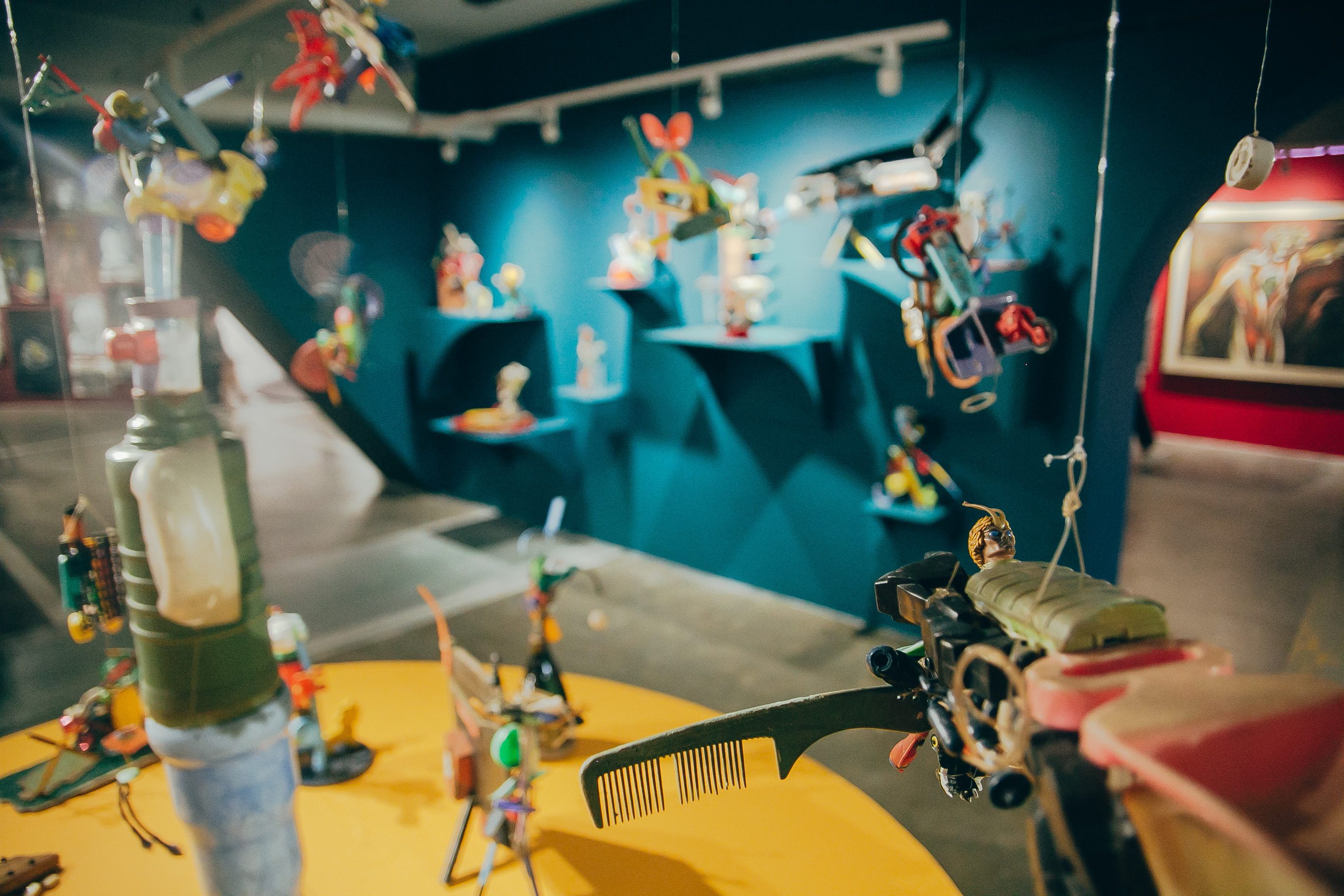 Presented by BPI, ArtFairPH/Projects includes exhibits featuring never-before-seen pieces and those especially commissioned for the event. Located on the 5th floor just above registration, the space is awash in color with no apparent logic in its curved walls and topsy-turvy turns.

But that’s exactly the idea behind it.

“I propose a radically different way for the viewer to access the art,” said curator Norman Crisologo, as published in the catalog. “Not by going from one work to the next, in a zombie-like fashion, but by diving into the space in which even the corners of the peripheral vision are pre-occupied.”

“There is no wrong or right way to enter or exit the space of the exhibition,” he also said. Upon entering, however, Jellyfish Kisses (a.k.a. Anton Belardo)’s oversized dolls dressed in candy-colored, psychedelic clothing seem to already immediately invite guests in all its gaudy splendor. Soft Punk Spring/Summer 2020 supposedly draws from the artist’s background in fashion. It is also a collaborative work for anyone who wanders in his space. Scraps of fabric and misshapen trinkets are provided to guests to piece together a large outfit. “Inspired by story quilts, each of these scraps is a memento of precious time, which will be infused with your own memories,” reads the exhibit notes. Jellyfish Kisses’ work leans heavily into the notion of creating spaces. “I create spaces for people. As a queer individual, I know the importance of safe spaces,” he said.

In the same way, it’s also reflective of the struggles of how a queer individual like Belardo can express himself fully. 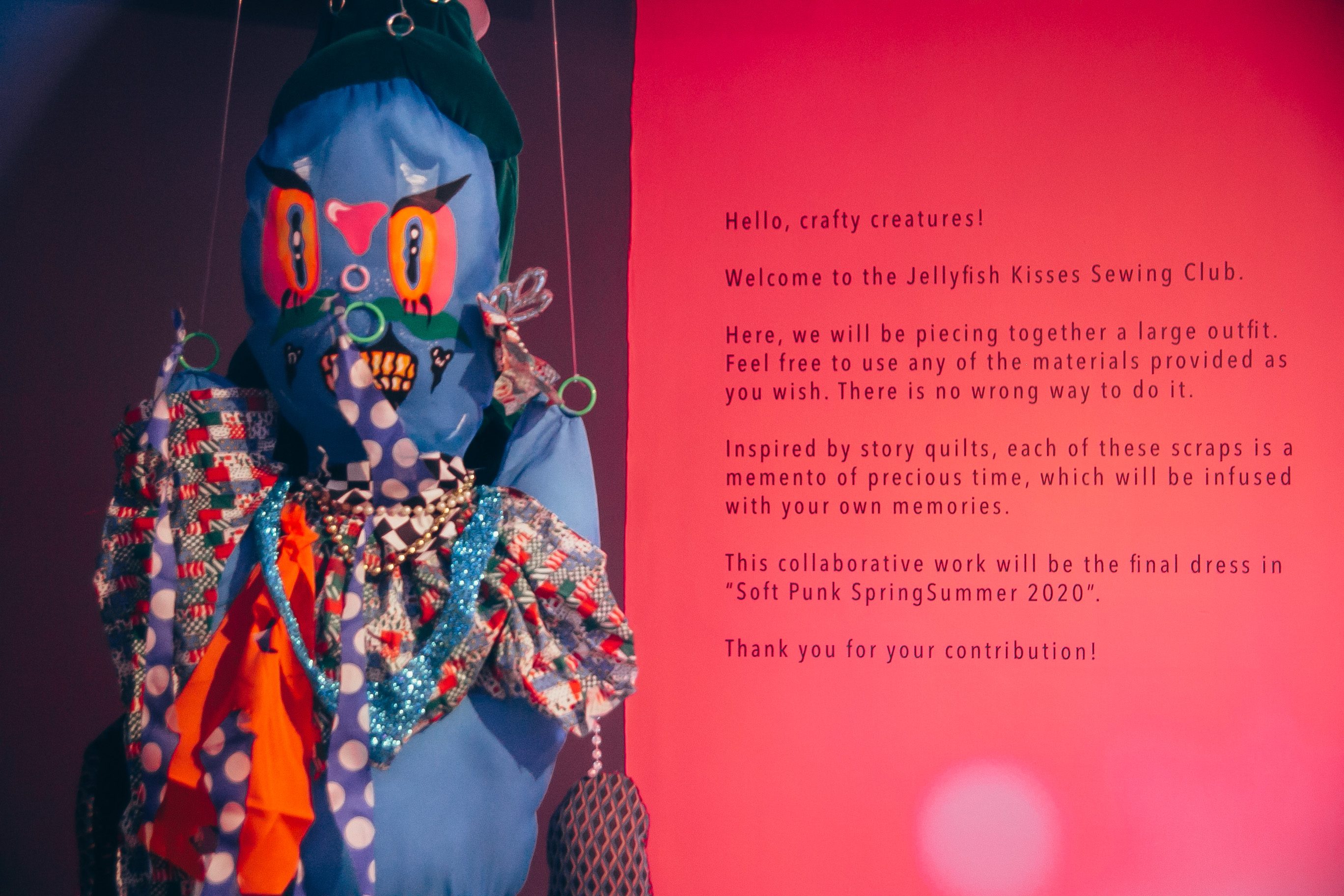 “The space in its multifarious function, dabbles as a physical vessel, an emotional haven, a forcefield that embraces every possible expression in the spectrum of gender identity,” the artist’s profile reads. “The result is an emotional, cathartic, and liberating space that throws shimmering light on the constantly-morphing facets of the self.” This year, Art Fair Philippines inaugurated a new section dedicated to the moving image, only after two years since it debuted one for photography.

Curated by film archivist/historian Teddy Co, critic Philbert Dy, and composer Erwin Romulo, the section is dubbed The Unconfined Cinema. It is also a celebration of Filipino Cinema’s centennial.

A small theater on the 5th level (with chairs and plush pillows for comfort) will screen blockbusters, arthouse, experimental, documentaries, essays, animation, video installations – all “under the banner of Philippine cinema.” A tableau of Julie Lluch’s sculptures (including some of her most personal works) stand beside commissioned pieces, recast for Galerie Stephanie’s (7F) exhibit.

Among the white cold cast figures are monuments in bronze – their likenesses are unmistakable. These are some of Philippine history’s most towering figures.

Irresistible Grace was intended to be a sort of retrospective for the esteemed artist’s career of almost 50 years – but in the juxtaposition of these 20 or so sculptures, it has become a commentary on the larger picture.

The curator’s notes read: “What Lluch intended to be an introspection of her work and a meditation on the ephemeral nature of beauty… uncannily parallels the dystopic state of our nation…” DOON easily stands out as a virtual reality (VR) installation, which is presented as part of art/n23’s incubator space. Springing from the idea of Issay Rodriguez, it is the collaborative effort .G/FK/DS and Imagine Realities.

To be able to participate in the interactive installation, there’s a companion app (available for download for both iOS and Android users) using augmented reality (AR). You’ll have to take pictures of stickers scattered throughout the fairgrounds.

DOON depicts how bees forage for food. Franklin Tuviera, who was involved in the animation of the installation’s AR aspect, tells Rappler that the work “revolves around the non-verbal communication of bees… [on where] the food source is.”

In the VR experience, you take the perspective of a bee, and you need to trace a gesture using controllers. If you’re successful, you will be able to see bees go out of the hive to look for food.

Nikki Luna’s Look at Her The 2018 piece from artist and activist Nikki Luna might end up as one of the most photographed pieces in this year’s Art Fair. It also has the potential to be one of its most incendiary pieces on display. (READ: Nikki Luna: Rebel with a cause)

It is a reflective surface – perhaps an invitation to take a self-portrait – but also some introspection on how loathsome rape culture can get. Embossed, in the same typeface Instagram uses, a provocative message reads: “As long as there are many beautiful women, there will be more rape cases.”

It’s an uncouth remark that can be culled straight from the incumbent President’s mouth. “This is not the first time that Luna has appropriated the President’s anti-women insults and pulled from them the power of protest, and it won’t be the last – as long as he is still in power, she will carry this load,” wrote Audrey Carpio in the exhibit notes for This is how to be a woman of the world, of which the piece is part of.

With something like Look at Her, Luna fashions a weapon out of misogynistic remarks like this, akin to a call to action so that ideas like these can’t hold sway. “The immediacy of the image is striking, for how many news are there in which young girls, out to do some errands, were raped and murdered?,” wrote Carlomar Arcangel Daoana in the exhibit notes.

“It’s a commentary of how the most vulnerable are oftentimes the most violated, even as if they are trying to keep body and soul together by doing a meager and decent livelihood.” In Noise Field, James Clar sculpts something out what is inherently unmalleable: light. He does this by using water.

In this installation, made in partnership with AC Motors and supported by Silverlens Gallery, Clar makes use of a sprinkler and laser system.

The Brooklyn, New York-based artist has been exploring light as a medium throughout his career, developing systems to “circumvent the limitations of screen-based work, namely resolution and two-dimensionality,” his biography notes.

Cement is sculpted into mundane objects, all “without intrinsic value,” except that they’re emblazoned with the logos of streetwear and high fashion brands: from Virgil Abloh’s Off-White to the storied house of Louis Vuitton. There are hollow blocks with skatewear label Supreme’s unmistakable trademark – albeit mirrored – from which proceeds are supposed to go to the benefit of those affected by the height of Taal Volcano’s unrest last January. Through this series, Daniel dela Cruz, as Ricky Francisco wrote, “leads us into the pervasiveness of mass media, pop culture, trends, the power of the brands, hype, and all manner of consumption which touch on our values and our choices.”

“It is a complex mirror held by the artist to us, by which we look at who we choose to be,” he continued. “We are cautioned of the draw of materiality, and are enticed to question what we do, and why, in a hyper-connected world where image is everything.”

See more photos of various pieces and exhibits from the Art Fair here: