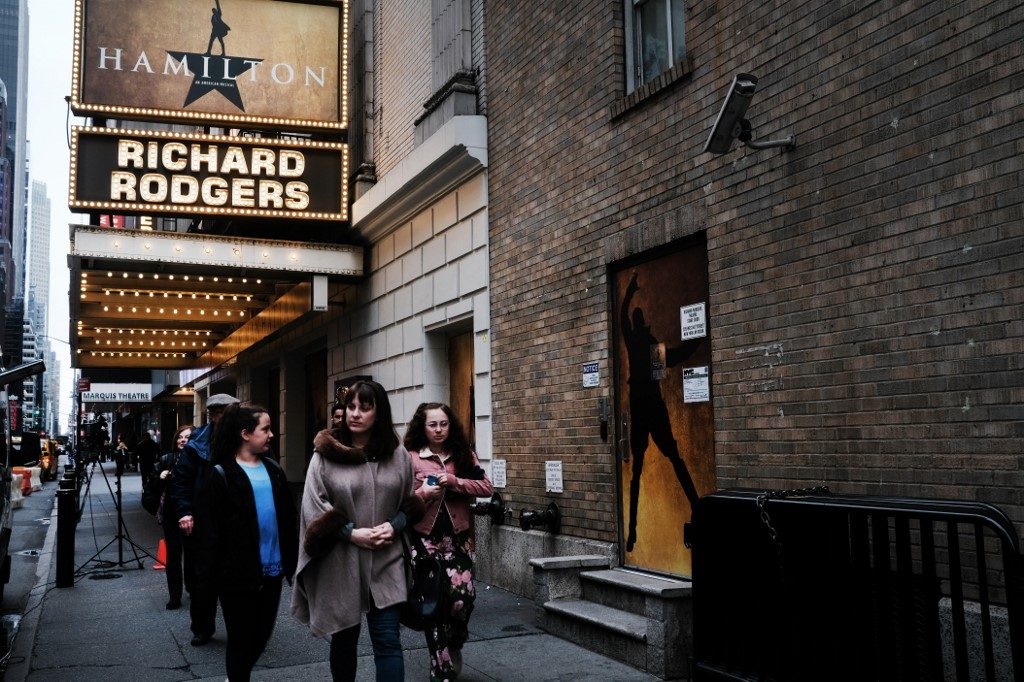 Facebook Twitter Copy URL
Copied
Broadway suspends performances for a month as the Metropolitan Museum of Art closes from March 13, without giving a reopening date

NEW YORK, USA – Broadway suspended performances for a month Thursday, March 12 as the world’s most famous theater district was hit by a ban on large public gatherings imposed on New Yorkers to stem the new coronavirus outbreak.

Broadway had been one of the few entertainment institutions still standing in the now-stalling cultural engine of New York, where a number of top concert halls shut along with the prestigious Metropolitan Museum of Art.

Performances closed after 5 pm Thursday and will not start up again until April 13, announced the Broadway League, a trade association.

New York Governor Andrew Cuomo earlier told reporters only schools, hospitals, nursing homes and mass transit facilities would be allowed gatherings of more than 500 people from Friday because of the pandemic, which has so far infected more than 1,300 in the United States.

The capacity for seated venues in New York is to be reduced by 50 percent, even if the occupancy is normally 500 or less.

Mayor Bill de Blasio declared a state of emergency in the city, saying it could have 1,000 COVID-19 cases by next week, a significant spike from the current tally of 95.

New York postponed its upcoming Tribeca Film Festival as well as the annual St Patrick’s Day parade, the largest in the US that attracts two million spectators.

The Broadway closure is a major blow for a tourism income stream that brought in more than $26.7 million last week alone.

“Our top priority has been and will continue to be the health and well-being of Broadway theater goers and the thousands of people who work in the theater industry every day, including actors, musicians, stage hands, ushers, and many other dedicated professionals,” Charlotte St Martin, president of the Broadway League, said in a statement.

The shutdown will be even longer than a landmark pause in 2007, when a stage hand strike dropped curtains for 19 days.

Jessica Hughes, a tourist from Minnesota, found the move “a little bit extreme.”

“I hope all of the staff and cast and crew are all paid during this time that they’re forced to be off,” the 40-year-old told AFP.

The Met said it would close from March 13 without giving a reopening date, while the Metropolitan Opera, Lincoln Center, Carnegie Hall and the New York Philharmonic canceled programming through March 31.

“With health authorities urging social distancing with greater emphasis, it is simply untenable for us to continue to perform, as it puts our artists, staff, and audiences at risk,” the Met Opera’s general manager Peter Gelb said in a statement.

The Met art museum said it would close all three of its institutions – the flagship location on Fifth Avenue, the Met Breuer and the Met Cloisters – and would “undertake a thorough cleaning” of each.

“While we don’t have any confirmed cases connected to the museum, we believe that we must do all that we can to ensure a safe and healthy environment for our community,” said the museum’s president and CEO Daniel Weiss.

The Met museum drew more than seven million visitors in 2019, with nearly a third coming from abroad.

The Brooklyn Museum followed suit in closing, and Washington’s Kennedy Center and the Boston Symphony Orchestra also said they would be closing their doors until the end of March.

The latest string of cancellations and closures comes as the entertainment industry grapples with the shutdown of Austin’s South by Southwest and Miami’s Ultra festivals, along with the postponement of California’s premier desert music fest Coachella.

The measure would spell disaster for many artists and their crews who rely on live performances for much of their income, as streaming eats into album sales.

Live Nation – whose stock plummeted 16.6 percent Wednesday – said its staff was prepared to weather the closure, according to Billboard, and would reevaluate the situation in early April.

Eilish on Thursday postponed her North American dates, saying in a statement “please keep yourselves healthy. I love you.”

But smaller venues and creatives stand to take the worst hit.

House of Yes, a performance venue in Brooklyn, announced that its weekend events would operate at half capacity per the governor’s directive, and then it would close until further notice.

“We also hope the government will enact supportive measures for small businesses, artists, live performers, and freelancers that will cushion the very deep blow to our core community,” the club said in a statement. – Rappler.com