Mar 19, 2020 11:19 AM PHT
Agence France-Presse
Facebook Twitter Copy URL
Copied
Stuck at home without glamorous parties or product launches to go to, influencers have been cranking out live videos and 'lockdown tutorials' with tips and suggestions to cheer people up 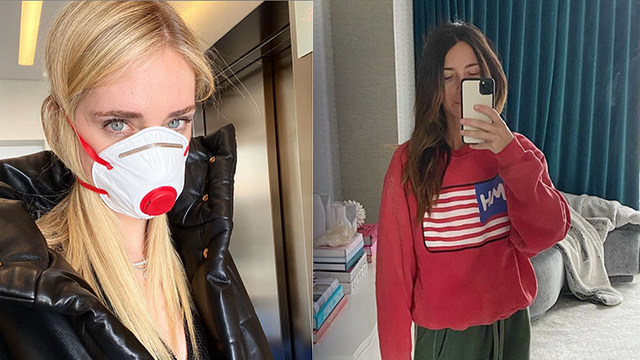 PARIS, France – The coronavirus may be causing global chaos, but for social media influencers it is a golden opportunity to grab the attention of a giant captive public forced to stay at home.

Some have even been sharing their experiences of living with the virus, like the New York blogger-turned-designer Arielle Charnas and the German fashion influencer Carolin Lauffenburger.

Charnas shared her initial symptoms and aches and pains on Instagram right up to the shock of her positive test.

“I’m so happy my fever is gone but the body pain that I’m feeling today is unlike anything else,” she confessed as he follower count rocketed to 1.3 million.

“It feels like we’re all in a bad dream right now,” she added.

And things took a turn for the worse when Charnas was harangued for risking her family’s health after posting a photo of herself hugging her daughter in her pajamas.

“You didn’t listen to doctors’ orders. Now your daughter probably has COVID-19 you dumb b****,” one angry poster wrote.

Since then the couple have been answering questions from the 27-year-old model’s followers about the illness and they are coping with quarantine in their Berlin apartment.

Lauffenburger said she was almost certainly infected, but wasn’t unduly worried as her husband had only mild symptoms that lasted for little more than a day.

‘Let’s not be selfish’

Still, she appealed to her nearly 100,000 followers to stay home and “not freak out”.

“Let’s not be the generation that preferred temporary freedom to the well-being of everyone,” she said.

The queen of the fashion influencers, the Italian Chiara Ferragni, was fittingly regal, urging her close to 19 million followers “not to be selfish” and avoid going for runs in the park.

Nor is she wasting the time in her palatial Milan apartment – which is not far from the centre of the Italian outbreak.

She has been “working hard creating looks, meditating and reading”, as well as helping her rapper husband Fedez organize online concerts from their balcony.

And her fans were warned that quarantine was no excuse to let themselves go or hang around all day in their pajamas.

Ferragni urged them to “workout with a YouTube video, follow a makeup tutorial, try a different hairstyle or indulge in a new purchase online.”

Stuck at home without glamorous parties or product launches to go to, lots of other influencers have been cranking out live videos and “lockdown tutorials” with tips and suggestions to cheer people up – though in the Philippines “cheering up” isn’t quite the right term for the effect influencers have had on followers. (READ: Influencer gets flak online for rant vs workers stranded due to coronavirus lockdown)

Several have reported soaring likes and shares with the Columbian Andrea Espada’s 15-second take on the song “Its Corona Time” being viewed 800,000 times in a few days.

Seeing the funny side

All of which gives ample scope for satire.

The French standup comedian Panayotis Pascot got 2,000 views in a few seconds for an Instagram live on the evening of March 17 – the first day of the French near-total lockdown – in which he showed himself doing absolutely nothing.

The TV presenter and comic Jeremstar shot himself in front of shuttered shops in Paris feeling nostalgic about all the things he was going to miss for “the next 45 days”, like pedestrian crossings.

“I am taking great pleasure in being ugly, not having to do myself up anymore,” he joked, saying that he was getting ready to put on 29 kilos (64 pounds) by eating ice cream at 4 in the morning.

But there is no slacking for the ripped YouTube fitness star, Tibo InShape, who despite being heartbroken by the closure of his favourite weights room, has been busy showing his viewers how to turn their home into an improvised gym.

Even the World Health Organization has been busy on social media, embracing TikTok, the Chinese video sharing platform popular with youngsters.

Their #SafeHands campaign is based on jokes and dance routines, with the US singer Mariah Carey appearing in a musical number to show how to wash yours for 40 seconds if you want to beat the coronavirus. – Rappler.com