Finding God in the quarantine 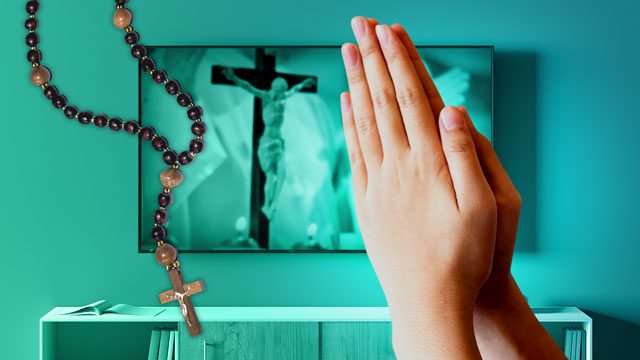 Facebook Twitter Copy URL
Copied
'The Church remains to be the Body of Christ always called to respond to greater charity; as such, it finds and dwells on these spaces where grace is found'

Wala na po ba talagang misa? (Will masses be cancelled for the meantime?)

Following the announcement of the imposed community quarantine to combat the 2019 novel coronavirus, church-goers have reached parish offices and staff to verify whether it applies to the celebration of Sunday masses. Compliant with the national government’s decision, Apostolic Administrator Bishop Broderick Pabillo called for a suspension of public masses in all parishes, chapels, and communities of the Archdiocese of Manila.

This is a new and unprecedented situation for Catholics here in the Philippines.

The SARS and the AH1N1 viruses only imposed strict measures on receiving communion, as well as touching and kissing religious icons and images. For a people whose Christian faith is evident through public attendance and palpable signs, to find Church officials suspend masses, novenas, talks, and recollections is shocking. Add to that the fact that even the public celebration of Holy Week and Easter Sunday, one of the most important events in the Roman Catholic Church, is suspended.

Despite continued clamors and requests, church officials remain firm with the guidelines imposed, emphasizing it as means to exercise charity and contribute to the common good. Given this, how can the Church practice its faith and be faithful to itself, in a time of a global pandemic, when its public celebrations are put on hold due to social distancing?

Opening new doors to being church

To clarify, what the bishops suspended are the public celebrations of the Holy Eucharist as well as other sacraments that involves public mass gatherings, i.e. large-scale baptisms, confirmations, weddings, and priestly ordinations. Part of the Church’s task in these trying times would be for its priests to celebrate the Holy Eucharist on behalf of the people and their intentions, most especially during Sundays when, at present, the obligation to take part in the Holy Eucharist is temporarily lifted.

But the Church ensured that the spiritual welfare of people are well tended in this time of social distancing. The use of livestreaming technology and broadcast TV, parishes and cathedrals streamed the priests’ celebrations of the Holy Eucharist. With no communion to receive, the faithful are asked to pray for spiritual communion with Jesus Christ. Households are asked to pray in common by reciting the rosary or reading and reflecting on the mass readings for the day. Through this, the Church exercises its care for its flock while following the government’s mandate.

It does not end there, as the Church also saw this whole thing as an opportunity to go back to and beyond essentials in terms of living the Christian faith. Beyond these online masses, there were a growing number of social media posts which aid in prayer and reflection, both from ordained and lay members of the Church. Parish social media pages served as communication hubs, relaying updates within their respective localities. Caritas Manila initiated a drive to provide hygiene kits and food packs to the urban poor who were gravely affected – physically and economically – by this quarantine, among other drives and initiatives coming from Church communities. Finally, while observing safety precautions and social distancing, priests are encouraged to hear confessions and visit the sick and dying within their respective areas and communities.

In a nutshell, the Church remains to be alive despite the absence of the familiar.

In fact, these show that new ways of being the Church is forged in this time of enhanced community quarantine. What was perceived as an unfortunate situation that could distance people from their faith became an opportunity to strengthen it and touch base with the core of the Christian faith’s reality: love for God and love for neighbor in the pursuit of peace, social justice, and integrity.

Of course this move did not come without criticism, with people who think that the Church has turned back on its duty by depriving people of the Eucharist at a time when they need it. But is it the case when, the Church finds itself even more as the Body of Christ on earth that, despite limitations, remains to attend to the needs of everybody? Is it not right that the Church protects the welfare of everybody and at the same time finds ways of exercising its mission, thus remaining faithful to itself and its identity?

The “space” for grace

It is unjust and appropriate indeed to call this pandemic as a moment of cleansing and “resetting,” when the poor cannot even afford to maintain social distancing and have to make do with the situation, given that daily wage earners have barely anything to take home.

Rather, it is true to say that in these experience of real suffering, grace finds its way in the pockets of our lives, especially at times in which we are led to pursue realities and challenges greater than us. In this pandemic, grace became present not just in the members of the Church, but in moments of good governance, of good intentions actualized by volunteers, of the effort put in by the frontliners.

Grace has been present, and it knows no boundaries.

Admittedly, all of us cannot really do much at this moment, and probably much of the work is done after all these. The challenge of returning to our normal situation (or better yet, improving what we had before this pandemic) still looms, knowing that after this, society will never be the same again.

Be that as it may, I believe that the Church, in its merits and imperfections, remains to be the Body of Christ always called to respond to greater charity; as such, it finds and dwells on these spaces where grace is found. – Rappler.com

Earl A. P. Valdez is a deacon of the Roman Catholic Archdiocese of Manila