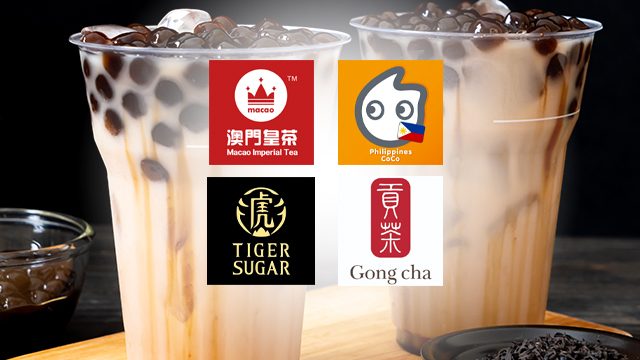 MANILA, Philippines (UPDATED) –  During these strange, uncertain times, people may be searching for a sense of “normalcy” – and for many, this might actually come in the form of sweet, creamy milk tea and pearls (among other boba toppings).

If the craving continues to call, here are a few milk tea chains and brands that have reopened shop for takeout and delivery orders.

Don’t forget to practice non-contact delivery and to tip your delivery rider!

They closed down majority of their Luzon branches on Saturday, March 18.

Tea chain Dakasi is now available for takeout and delivery orders via GrabFood or Food Panda.

Macao previously closed down all their stores on Thursday, March 20.

Served in a mason jar with pearls, the LiberTea Milk Tea (500ml) costs P120, and is available for takeout and delivery via Foodpanda in select stores.

As of Saturday, April 11, CoCo’s Glorietta 2, RBC Sheridan, Cyberpark Tower 1, and Fairview Terraces branches are open for takeout and delivery orders via LalaFood from 11 am to 6 pm.

Delivery hours are from 11 am to 7 pm every day.

For gallons of milk tea delivered to your home (best for sharing between 10-15 people), you can order your preferred milk tea flavor in advance from Gallontea – just send their Facebook page a message.

Milk tea flavors include classic, wintermelon, and chocolate, and can come with additional toppings in containers, such as tapioca pearls, nata crystal, and egg pudding.

As of Monday, April 6, YiFang has reopened their Tomas Morato branch from 10 am to 6pm for takeout and delivery orders via GrabFood, Foodpanda, and LalaFood.

The Taiwan-based fruit tea and milk tea chain shut down all of their stores on Tuesday, March 17.

Aside from their drinks, you can also have their fresh milk and ice cream bars delivered.

Fruit tea is also available in lychee, passion fruit, land lemon flavors. All drinks are inclusive of pearls, and can be customizable according to your preferred sugar level. Customers can place their orders via their online order form.

Local milk tea shop Infinitea is still open for delivery from various branches – just check the Facebook page of your preferred store for its respective delivery hours and details.

As of Saturday, April 11, Taiwanese milk tea brand Chachago has reopened several branches nationwide for takeout and delivery orders, either store-direct, via GrabExpress, or Lalafood.

Order your favorite milk tea and choose from these open shops using this foodpanda coupon!