In lockdown, communities find different ways to feed one another 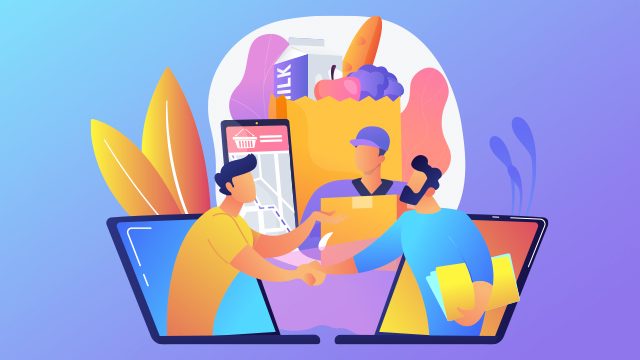 Facebook Twitter Copy URL
Copied
From Viber chats, Facebook groups, to community kitchens – Filipinos in Metro Manila are finding new ways to feed and be fed, even in quarantine

MANILA, Philippines – A grocery or palengke run is, for some, the most banal of chores.

For others, it’s part of a grander ritual, where everyone dresses in their Sunday’s best. It can also be an end-of-the-day quick stop, a sneaky run squeezed in during lunch break, or a de-stressing activity, where one spends more time walking around aimlessly than actually perusing through the many aisles and crannies of your go-to store.

This is, of course, a reality from a different world – one where home quarantines and a pandemic aren’t your daily reality.

In this strange time of lockdowns, limited grocery runs, no mass transportation, and most food businesses on limited operations, thankfully, communities big and small have found different ways to feed and be fed, both online and offline.

Online: the way to go

The day before the Luzon-wide lockdown, many Filipinos already stuck at home scoured the internet for online grocery services that were open for delivery. What used to be an easy process became a race, if you will; as orders rose, estimated delivery times were pushed back indefinitely. Some halted operations, not so much because of the influx of orders, but because no mass transportation meant crucial workers didn’t have a way to get to work.

But it also meant that smaller online business — The Murang Gulay Shop, Future Fresh, Green Grocer, Homegrown Organics, among others – had a chance to shine.

Marie Puyat, never understood how vital online groceries were until the quarantine – she lives with her two senior citizen parents who are cancer survivors and immunocompromised. As the only child living with them at their home in Makati City, it was her job to source a daily gulay supply for the family.

Grocery store trips weren’t an option – but the internet was.

It’s how Marie, like many others, discovered Session Groceries, a Baguio-based produce portal that sources from different farms and delivers to customers’ doorstep, usually within 3-4 days.

These online shops usually have their system down to a T — from finding customers, order taking, sourcing their supply, delivery modes, to “responsive customer service,” which Marie lauded Session Groceries for, considering their high volume of orders. Prices are surprisingly competitive – close to, if not the same as those in markets themselves. And it’s no wonder. Session Groceries reduces the number of middlemen between farmer and consumer.

“It makes me happy to be able to help local farmers get a fair price for their crop, and it made me appreciate even more the hard work our farmers put in constantly,” Marie said.

Customer relations in and around Session Groceries go beyond the direct service – regulars usually come together to support delivery personnel whose orders get cancelled right when they’re on the way. On Session Groceries’ Facebook page, followers jump in to claim abandoned loot.

On Viber, the palengke is alive and running, too.

It was actually in the “Filinvest 1 marketplace” Viber group that Mary Ann, who lived in Quezon City and was just looking for condiments and canned goods, spotted a Baguio-based fresh produce supplier. There was a problem, however: it would only make sense for the supplier to deliver produce for a minimum order of P100,000.

While Mary Ann Streeter, a wife and mother of two, couldn’t spend that much herself, she did the next best thing – tap friends, family and neighbors to raise funds. Within days, she hit the P100,000 quota.

A hunt for personal supplies turned into something bigger – fresh produce from Baguio filled relief packs, which were distributed to poor areas outside Filinvest.  “We also sent help to a priest in Payatas we found. He is currently feeding tens of thousands people there,” she said. To this day, she still spearheads distributing donated produce to communities – a collective effort that began with a chance Viber message from a farm in Baguio.

It takes a village (and a resourceful villager)

The Department of Agriculture’s Kadiwa ni Ani program – which connects farmers to different local government units, barangays, and homeowners associations in Metro Manila launched in September 2019 – was what Camilla tapped when the lockdown started.

With the permission of the DA and her community’s board, Camilla Magsaysay, a 26-year-old living in Marikina City, set-up a one-day produce market at their community hall for residents, most of them senior citizens who can’t go to public markets and stores during the pandemic.

“Everything went to the Kadiwa ni Ani initiative which supported the farmers who sell their produce,” Camilla said.

Especially during the lockdown, it’s these programs that keep both communities and farmers fed. Other initiatives that have been emerging in this ECQ include assisted grocery runs like Drive Groceries and Mr. Grocery.

Camilla also initiated her own “Pasabuy Program,” where she consolidates orders from her neighbors for bulk grocery goods via Facebook messenger. She personally reaches out to companies in hopes that they can deliver food in bulk. So far, she’s been redistributing butter, milk, margarine, condiments, and other pantry staples to neighbors for a service fee of P50. Pharmacy runs are next on her agenda.

“If there’s a product that the whole village needs, I source it for them,” she said.

Other forms of community feeding efforts are community kitchens and mobile palengkes – a vital form of nourishment for those stuck at home and dependent on aid from their local governments.

In Mandaluyong City, for example, a fully-stocked mobile palengke brings fresh fruits, vegetables, and other essential goods around the city. This concept can also be seen in condomoniums, apartment complexes, and compounds around the city – homeowners pitch in daily to provide boxes of bread, fruits, veggies, and even homemade goods on display at the lobby for neighbors to buy at decent prices.

These efforts help in keeping the crowds at bay, and to make it easier to follow home quarantine.

On its first day, the community kitchen fed 1,441 frontliners lunch and dinner, said Mash Gonzalez, the head of Pasig’s community kitchen. The next day, 7,383 hot meals were served. The steady supply of hot meals haven’t ceased since.

Community kitchens are non-profits that rely on donations — a lot goes into keeping a kitchen running daily, from the logistics, the ingredients for thousands of meals per day, and of course, the volunteers tirelessly slaving at the stove.

Ingredients are usually sources from sponsors, including the private sector and FMCG companies. “Their donations include bread, sacks of rice, bottled water, vegetables, LPG gas tanks, and also raw meats like chicken, beef and pork,” he added. Pasig’s Mega Market also offers their goods to Mash’s team at discounted prices.

Pasig’s community kitchen involves its local workers, too – most of its workers and cooks are employees from the city’s different departments.

Volunteer work for a community kitchen isn’t easy – mornings start early, with 4 stages of cooking needed before the rush of lunch hour and the flurry of deliveries. There’s ingredient prep (chopping), cooking, packaging, and releasing – all of which must be done before noon. The community kitchen, located at Rainforest Park in Barangay Maybunga serves personnel at health centers, hospitals, quarantine checkpoints, the police, and the coastguard.

Cliche as it may be, the Filipino bayanihan spirit is well and alive in this crisis’ modern-day heroes – neighbors, community members, and even strangers providing food to individuals in need of nourishment, and offering farmers the means to feed their families. – Rappler.com