While on lockdown, Ayala Museum goes online – and on Animal Crossing 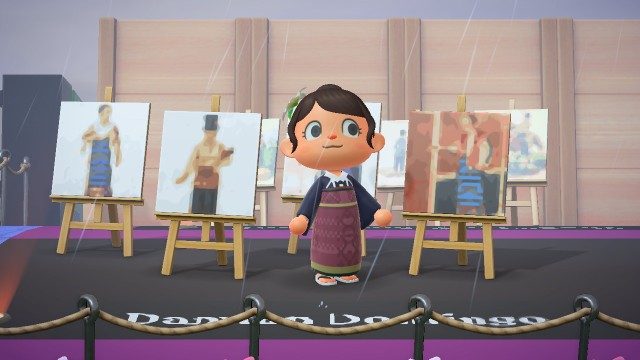 MANILA, Philippines – It was a strange thing to do in the middle of a pandemic – fix one’s things, put on a Filipiniana outfit, and wait anxiously at the airport a full 30 minutes before a scheduled flight.

It either makes sense or becomes stranger, perhaps, after I tell you that I’m doing this with a Nintendo Switch as “Bea,” my Animal Crossing New Horizon character (who, unlike this author, sports a cool shade of pink on her tresses). Inside my island’s airport, I was waiting for my Dodo Code, a 5-character code that’d bring me to Flotus, an island that was playing host to the Ayala Museum’s days-long “Island Exhibition,” part of several events to celebrate International Museum Day.

“On any other year, we would celebrate International Museum Day by having a free day at the museum. But since we’re unable to do that this year, we still wanted to provide a way for people to still have that museum experience, even if it’s in an unconventional way,” Jezelle Ong, the Ayala Museum’s associate manager for marketing, told Rappler in an email interview.

Slots for the exhibition ran out quickly, which isn’t a surprise – Animal Crossing New Horizons, a long-anticipated version in the beloved social simulation video game series, has taken the online world by storm since its release.

It wasn’t the first time the museum used the popular game to interact with fans.

In early April, weeks after the game’s release, the museum released codes so players could wear a Bagobo warrior shirt and Yakan skirt in-game.

Nearly two months later, they decided to go a step further – have players travel to an island and experience art (as pixelated as it may be) in the game. The process was straightforward. You sign up for a slot on your preferred day. At least a day before your scheduled island visit, Ayala Museum sends an email to confirm that you made the cut. On the day of the tour itself, you need to message the museum through Facebook, where you’ll get the special Dodo Code for your group’s time slot.

It was, as expected, a little buggy; after all, I was part of the very first batch of island visitors. On Animal Crossing, islands can only receive one visit at a time (via the adorably named Dodo Airlines). A player’s screen also freezes whenever a person is about to arrive on the island – a minor inconvenience for players who’ve arrived ahead of time, because they won’t be able interact or take photos with the exhibit right away.

Animal Crossing also only allows a maximum of 8 visitors, and waiting for each of the 8 to fly into the island can be a surprisingly long process. Still, we’re on lockdown, we have a Nintendo Switch at home, and we have Animal Crossing New Horizons. There is truly little to complain about.

The exhibit itself wasn’t grand (because, trust me, other players go crazy in the grandiose department) and featured a welcome area, a reception, the main exhibit areas, and a beachside “souvenir cafe” (with Ayala Museum merch, of course). For the pilot Animal Crossing exhibit, Ayala Museum curated the works of Filipino artists Juan Luna, Damian Domingo, and Jose Honorato Lozano. The exhibit itself was made in-game by another “Bea,” one of Ayala Museum’s designers.

Bea (the exhibit guide) teamed up with the museum’s Curatorial Team to come up with the exhibit, which took around 3 weeks to put together. 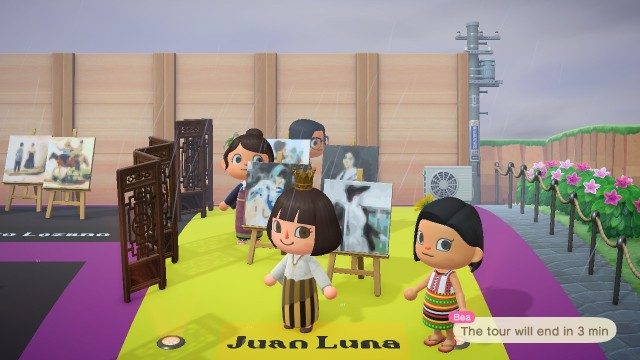 While it wasn’t a grand, terraformed extravaganza (the game allows you to change the topography of most of your island), the visit itself was amusing and fun enough. It was quick (I was among the last to arrive) but I still had time to run around the works of some of the country’s most esteemed artists alongside fellow Animal Crossing players who, perhaps like me, were amazed that this was even a thing.

(Again, if you told me a year ago that one day I’d be viewing pixel art versions of Luna, Domingo, and Lozano on an island populated by animals in a Nintendo Game, I would have asked if you were okay. I will also have to note that a year ago, I would have thought the idea of a pandemic defining 2020 as fiction. But I digress.)

Since it’s still pixel art, it was close to impossible to actually appreciate the paintings. But all’s good, since the Ayala Museum emails you a catalog post-exhibit complete with digital copies of the art work, artist biographies, brief painting descriptions, and, of course, in-game QR codes. This was, most likely, the closest I’d get to owning a Luna painting.

The island exhibit was only one of several online activities that the museum prepared.

Other events include a limited film screening and a virtual museum tour, among other references on their website. Senior director Mariles Gustilo says they’ve been active in trying out online programs and events for patrons to get a much-needed dose of culture and arts. The museum has been closed since June 2019 for renovations.

“Ever since quarantine started we’ve been working on making more of our existing and new content available online so that people still get to experience art, history, and culture even if they’re at home,” Gustilo told Rappler.

Renovations on the real-life Ayala Museum have been put to a halt because of lockdown restrictions and, really, that shouldn’t be too pressing of an issue for its patrons. Its exhibitions have been safely packed away since 2019 and, understandably, spaces that gather lots of people together will likely have to take a backseat until the pandemic is managed.

For now, Ayala Museum will focus on activities they’ve always been known for — workshops, lectures, exhibitions, and concerts — but this time, online.

Renovations on Animal Crossing, meanwhile, aren’t affected by lockdown restrictions at all. And who knows, Ayala Museum might just be crazy enough to take that as its next online step. – Rappler.com