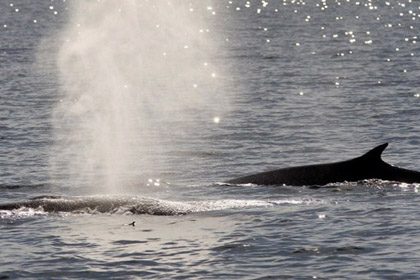 For centuries, perfume makers have prized ambergris for its ability to prevent scent from dissipating.

The wax-like substance is secreted by sperm whales to protect their digestive systems from sharp objects. When the animals vomit, the ambergis reacts with salty ocean water and eventually washes ashore in chunks that can look like rocks.

Featured in Herman Melville’s novel “Moby Dick,” it is a stuff of legend that still garners small fortunes for those who find it on the shores of the Atlantic, Pacific and Caribbean oceans.

Scientists have long sought alternatives for industrial uses because ambergris is rare, costly at $10,000 a kilogram, and could “be a factor in whale hunting,” Joerg Bohlmann, a professor at the University of British Columbia, told AFP.

Bohlmann says cis-abienol, a component of sage and fir trees, can serve the same purpose as ambergris in scented products. But until now isolating it from the rest of the sage or fir plant has been difficult.

“We’ve now discovered that a gene from balsam fir is much more efficient at producing such natural compounds, which could make production of this bio-product less expensive and more sustainable,” Bohlmann said in a statement.

The gene research, by Bohlmann and his colleague Philipp Zerbe, was published April 5 in the Journal of Biological Chemistry.

Bohlmann said the gene can now be introduced into yeast and grown on a large scale to produce cis-abrienol.

Bohlmann said he expects consumers will prefer the plant-based product to ambergris. “If you ask people what they prefer, a component on their skin from whale vomit, or resin from a fragrantly-smelling tree, they may not say the first choice.”

The University of British Columbia will license a bio-tech company to commercialize the product, he told AFP. – Rappler.com