Apr 9, 2012 7:40 AM PHT
Panjee Tapales
Facebook Twitter Copy URL
Copied
His accomplishments are his own now; the ship his to steer

It has been weeks since our children graduated. Life has changed again and all that is new continues to shimmer about us.

During the first meeting with other parents in my son’s class, I brought up graduation. This was the year. He had just entered the 8th grade, his last as a lower school student.  Even though the school year was just beginning, I felt myself looking ahead and hoping that it would be a meaningful ceremony–one that would capture this important crossing in his life.

Graduation is not just a day, but a movement towards the crossing of a life threshold — perhaps the first in which he consciously participates.

Graduation year, it seems, is the year for remembering.

I don’t know how many times I caught myself thinking of my son as a baby. I revisited the day of his birth, found myself daydreaming about his baby smell, the glorious mother-son bubble we floated in every time he slept on my chest or in my arms. I remembered him in his multi-colored striped shirt and red overalls, those impossibly tiny red Keds, his little hands reaching up to me, the sound of his cry and the near-violent effect it always had on my heart.

Every parent knows that once you have a child, you are destined to a series of weanings: from the womb, the breast, to solid food, crawling to walking, first day of school, first trip away from home–each one more daunting than the next.

This graduation — the first for me — is a summary of all that, a big breath of gratitude for all that has been and a plea for strength towards the next wave.

At the end of every school year, for the last 8  years, I have congratulated myself for being able to provide wholesome meals, physical, emotional and spiritual support,  show up wherever I was needed, and even take on tasks I didn’t particularly care for to ensure that my children could have a full experience in school.

There were many heart-wrenching decisions, a few life-threatening episodes, tears, but also so many moments of laughter, warmth, hope and joy. Today, I almost always have to do a double take when I see before me a man becoming, a sub-total of sorts: not quite who he will become but already well on his way.

This graduation wasn’t just about moving on from grade school to high school but an end to childhood and the beginning of adulthood. It was the end of a life phase (the magical phase of tiny things!) and a moving on towards the next, closer and closer to becoming an individual — a human being responsible for his own life. 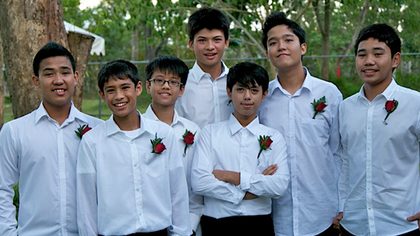 There were 11 children in my son’s class. I saw them all as round, little people, and watched them stretch over time, changing imperceptibly and yet too quickly.

It was a struggle to find the right teacher for them (in a Steiner school, a class teacher ideally stays with the children from class 1 to 8), but in the last two years, she came at last.  She rallied them forth, plugging holes the others had inadvertently left, making sure they would be ready for high school, no matter where they went.

At the ceremony, she stood before her children and for half a second I was worried she would read her message, but she spoke to them from the depths of her being and her notes were just that.

She gave them a gift of a word each, something she felt would help smooth out their edges: confidence, faith, sensitivity, forgiveness, patience — these were among the gifts she bestowed.

She walked a fine line between public criticism and advice, but she spoke with warmth and love for each child. For a mother listening in the audience, there was a pang of pain to hear, in front of everyone, where perhaps one has failed to support, balance or correct her child.

But as soon as I got over myself, I realized what she gave was a gift of truth and clear seeing.  She could not have given those gifts if she had not been certain they could handle the truth about themselves and accept, as we all should, that there are things in us that are better transformed. What a powerful present to give.

I have always held truth as a non-negotiable in my home.

My children know we don’t lie and I have had moments of pure warmth when one or the other has come up to me, with both fear and courage in their eyes, to restore truth when it has temporarily gone astray.

That night, listening to my son’s teacher, I realized that her gift supported that value. My son is old enough now to begin wrestling with and finding his own truths.

“Congratulations, son.” On the day of the ceremony, finally, I held his gaze, said the words to him, our hands–almost the same size now — joined in mutual accomplishment.

Although parents were congratulating each other for a job well done, for the first time I felt my son was awake and aware of his moment. His accomplishments are his own now; the ship his to steer.

On the night of his graduation, I reminded myself it was time to let him. – Rappler.com