‘Red’: Two directors and a play 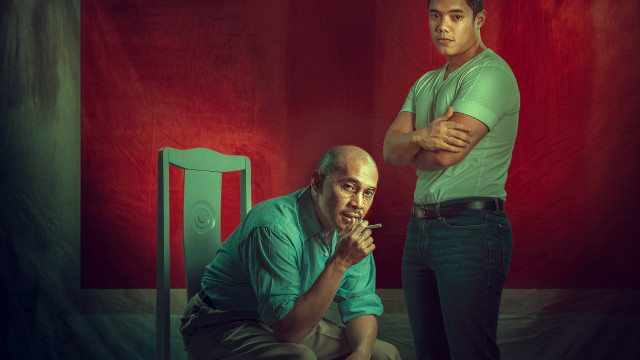 MANILA, Philippines – “Red” by John David Logan is a play that won almost every major theatrical award in London when it first premiered in 2009. It repeated the same feat in New York when it opened in 2010.

Its Asian premiere was staged in the Philipines in late February, and starred Bart Guingona and Joaquin Valdes, both respected theater directors.

After a successful Cebu run, “Red” is being restaged in Manila for two nights before touring Dumaguete in September.

“Red” is about the abstract expressionist artist Mark Rothko. The play is regarded as a powerful piece about art, mentorship, forebear and offspring.

Get to know Bart and Joaquin better in this funny Q and A:

Bart Guingona: Hey, Wackie! Or Joaqui (gutterally like hocking to spit)! Or Joaquin Pedro! Or JPedro! Or Joaquin! Or just plain ol’ Pedro…My first question: What the heck do you like to be called? Why?

Joaquin Valdes: Joaquin is fine. I was called Wacky during my early years on stage. It was catchy then, but I grew out of it when I needed people to take me seriously. Pedro is my second name. I just wanted to honor my parents by using my whole name, Joaquin Pedro.

BG: How did you stumble into performing?

JV: All my life, I was surrounded by performers or people who loved watching [performances]. My brother, during his college years, made me a part of a [De La Salle University] production called “Stage One.” I was around 7 years old. It was a musical revue performed in [Cultural Center of the Philippines’] Little Theater.

I didn’t know what I was doing then. I had to run on stage, pretend there was a war and pick up pieces of chalk on the floor imagining them to be bullets. They made me dress up in rags, and listen to my cousin Iya Yotoko sing a song to me, while I played with a plastic helicopter toy. Little did I know that I was already foreshadowing “Les Mis’” Gavroche.

[“Stage One”] was directed by a DLSU student named Mark Reyes [now a director for television]. It was filled with a cast of “nobodies” like Cookie Chua, Roy del Valle, Jay Marquez and a lot more who eventually became nobles in the entertainment, stage and music industries.

JV: My dad moved heaven and hell to get me to a [Philippine Repertory] Summer Workshop back in 1994. That’s where my love for theater took a new turn. The year after, I was asked to audition for the ensemble of “Evita” with Menchu [Lauchengco-Yulo] and Miguel Faustmann — my first big show in Meralco. I was 11 years old.

Running through the wings and dressing rooms of Meralco’s backstage area, Tita Baby [Barredo] stopped me and, expecting to get scolded, I froze. She told me that she wanted me to be “Pinocchio” in her next children’s theater show in 1996. You couldn’t really say “no” to Tita Baby. The rest is history.

BG: Who did you look up to as a child performer?

JV: I think you can ask anyone from my generation of performers and they’ll say one name — Lea [Salonga].

What Lea has accomplished as a performer and as a Filipino is undeniably influential to my generation of performers. She was a Rep kid who started out in workshops and musical theater; she eventually got on television shows and some movies, but really stuck it out with theater until “Miss Saigon” happened.

She is a living example of what a Filipino theater actor can accomplish.

I remember during one rehearsal of “Pinocchio,” Tita Bibot [Zenaida Amador] brought Lea in to watch. After the rehearsal, she introduced me to Lea, who had the brightest eyes and a smile I can [still] remember. I think that was when I started crushing on older women. Tita Bibot later on wrote an article about “Pinocchio” saying that they possibly found their new Lea Salonga with me. That was really humbling.

I eventually did what was probably my favorite role to date: Edmund in Trumpets’ “The Lion, The Witch and The Wardrobe.” That’s where stage acting and theater became not just fun, but deep and profound as well. I grew up in this musical and Trumpets became a very important family in my life. Until now, some of the most treasured friends I have are from Trumpets.

BG: Talk about “Red” and your role. What makes it special?

JV: Ken is medicinal for me. He’s aptly fictitious and created almost as a reminder that no matter how caught up we are in the “blacks,” we must never, ever become blind to the “red.” He’s hope, chance, life, beauty, goodness and truth personified.

I liked fleshing him out — or filling him in, rather, since he was a character that never really existed, but was true all the same.

He is conscience, a voice, a wish that we all need to hear and have especially when we give up on ourselves.

BG: Talk about the kinds of processes you believe in as an actor, as a director.

JV: Acting for me is meant to serve a greater good that is far and beyond the applause you get after the show. You have that responsibility as an actor to direct the audience to what is true and essential and not what is vain and superficial. Performers exist to arrest attention, temporarily. Actors — real actors — exist to arrest hearts. This arresting can be permanent.

I’m a director not for the credits I can get, but for the change I can inspire.

BG: If people watch a Valdes film, how would they describe it in one word? What would make it distinctly “Valdesian”? Why?

JV: Wow. Probably a “mind f@#k.” It would be intense, quiet, slow at the right parts, and fast at the wrong ones. Some people will love it, some will hate it. Most will blog about it, but everyone will buy it. Some will laugh, many will cry, hopefully no one will walk out. It’ll be engaging, maybe hard to understand even with subtitles. It won’t win awards…but it will most likely win hearts.

BG: If you had to direct “Red” what would your pitch be? Your angle?

JV: This is an unfair interview! Here goes. “Red” is old vs new. Life vs death. Fathers vs sons. Controlled vs free. Satan vs Santa.

BG: Do you know your lines? (hahaha)

BG: You get your turn to ask me questions later.

Joaquin Valdes: What exactly is The Necessary Theatre, Actor’s Actor’s Inc. and why haven’t we heard from them in a while?

Bart Guingona: TNT is our series of plays that have a potential to challenge the mind, touch the heart, alter the soul. These plays are selected on the basis of their being “idea-driven.” The bigger the idea, the better!

JV: It’s your first time working with me. How did you end up choosing me?

BG: The smart reading. The pleasing personality. The confidence. In fact, it’s the confidence I found myself having to try to curb in rehearsals. Plus, of course, I can feed you cat food and Sky Flakes…

JV: You’re producing, directing and acting in “Red,” and teaching and advocating as well. What are the lows and highs of wearing so many hats?

BG: Highs? Wat dat? (sic)…Kidding aside, I’d rather not do it all. I have no choice. Who was it that said, “It’s the economy, stupid.” But the multi-tasking could be worse.

I remember one show, a musical, where the producer did not pay the orchestra and the conductor walked out. I stepped in as conductor, which of course I had never done in my entire life. Sometimes, sheer desperation drives you to do very interesting things!

JV: Apart from being a director and actor, you’re an advocate. Tell us about your causes — media Nation…etc.

BG: Oh, no! I was hoping that would not crop up! But since you asked, I am part of a network called pagbabago@pilipinas. We do a lot of advocacy organizing: media reform, climate change adaptation, voter enlightenment, etc. That’s for another section of the paper.

JV: What’s the most fulfilling part about mounting “Red”?

BG: The chance to work with a great team — Coco Anne and Baby Imperial for our set; GO Eastern Construction for building it. You, of course, to bounce off against. The lights and sounds people. Sheesh…that sounded like an acceptance speech! – Rappler.com

The return of “Red” by Actor’s Actors Inc’s The Necessary Theatre is for the benefit of the UP School of Economics Alumni Association and the UPSE Class of ’88. It will go onstage at Teatrino, The Promenade, Greenhills on August 23 and 24 at 7:30pm. Tickets are available at Ticketworld 891-9999 or through 0917-8170463. Visit facebook.com/TheNecessaryTheatre and follow them on twitter @AAITNT.