Google+ gets a redesign 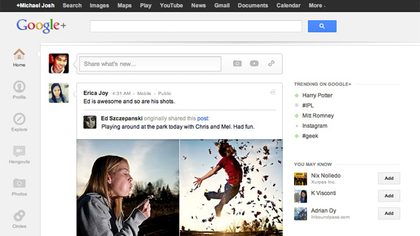 MANILA, Philippines – Have you seen Google+ lately? It’s got a new look.

Google started rolling out the redesign to users of its social network on Thursday April 12 (Manila time) calling it “a more functional and flexible version of Google+”. While the initial reaction to the redesign has already spurred criticism because of the large amount of white space, web design speak for unused screen real estate, which there is plenty of on the right hand site of the site, Google Senior Vice President Vic Gundotra says the design accelerates “efforts to create a simpler, more beautiful Google.”

While some of the “new features” seemed borrowed, such as a Facebook Timeline-esque cover photo, and a Twitter-like Discovery Page, called Explore where users can view trending or other interesting posts on the network — there are also original concepts unseen on other social networks like a navigation ribbon that appears on the left side of the site.

Google also improved on some of the existing features. Provisions have been made to display larger photos and videos in the news feed, and a new hangouts page allows you to not only view your existing hangout invitations but makes it easy to find other hangouts to join. All the updates and new features are detailed in the video below:

Google+ was first launched as an “invitation only” field test on November 7, 2011 and now has currently 170 million registered users. While many debate if it will ever compete with Facebook some experts believe that tighter integration with Google products might be the secret to this products survival.

Tell us what you think of Google+’s new look. Leave a comment here or on our Google+ page at http://gplus.to/rappler. Don’t forget to add Rappler to one of your Circles.- Rappler.com