Apr 14, 2012 10:01 AM PHT
Robert Uy
Facebook Twitter Copy URL
Copied
'It was a rite of passage, an assurance that the taste would live in a new generation' MANILA, Philippines – Gallivant. Various dictionaries define it as “to roam about for pleasure without any definite plan.” Every now and then, it is liberating to not have a plan, to roam and to find pleasure in the act of roaming itself.

While one can argue that it is mindless, I can assure you that it is not. Some of the best ideas, songs, stories, theorems and strategies have come about through a seeming mindlessness. Think of those ideas you get while in the shower, while staring into nothingness, while walking.

I like gallivanting in my mind. But it can be a dangerous thing, especially on an empty stomach. Every now and then, you wind up with a craving for a dish that is seemingly out of season but is really a food for all seasons.

Cravings know not time of day, season or reasonableness. A craving is like a new born – it insists on what it wants NOW because it has no choice. A craving is exempt from propriety or notions of politeness.

And so it began.

It started with a whimper but became louder and difficult to resist. A simple recollection triggered by sorting out last year’s Christmas décor turned into a full blown search for bibingka. The good news is that it is available year round.

The even better news is that you don’t get those stares from well-meaning folk when they hear you order it in the middle of the Philippine summer…not anymore. Rather than question your choice of merienda, it is more likely that you will hear someone say, “Why didn’t I think of that?”

Merienda is a snack or a light meal, probably the equivalent of afternoon tea or brunch. Spain has a merienda, Italy has merenda while Croatia has marenda.

With varying caloric degrees, this in-between meal can range from a cup of Java to a full blown “sit down and forget that you just ate a few hours ago” meal.

The choices are endless. There is no one single dish that works for everyone every day. I once heard a friend tell me that while in the US KFC is a proper meal, he was surprised that Filipinos had the Colonel’s chicken as a snack. There are sandwiches, street food, cakes and pastries, snackage and chips, peanuts, coolers and desserts, to name a few. It is not unusual to also have a full-blown rice dish/topping or noodle dish. 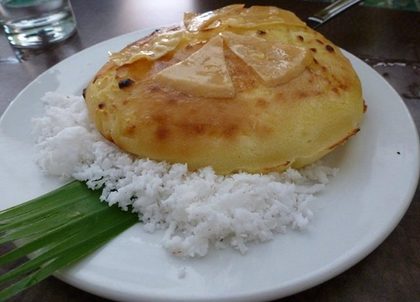 An especially made clay container is lined with banana leaf, placed over preheated coals, while the mixture is poured into it. Another piece of banana leaf is added to the top and covered with more preheated coals.

The variations to this include toppings of salted duck egg, cheese (quick melt, queso de bola, kesong puti) and so on. Served piping hot, it’s infused with the unique aroma of toasted banana leaves and then smothered with butter or margarine, a drizzle of sugar and grated coconut.

Joy is found with the slightly burnt edges of everything that wandered too close to the heat. Lust is discovered as one sees the butter slowly melt over the hot, steaming rice cake. Self-discovery is had when the cheese, melted butter and the bibingka travel to the mouth as the distinct wafts of grilled banana leaf accompany it on its journey.

Malagkit is made of glutinous rice topped with coconut milk and is usually served cut into squares. The delight is in that layer of coconut cream and a brushing of butter on top of the slice. The smile it paints on your face when the mix of sweetness and saltiness tickle the palate is just priceless.

Bibingka will always have an amazing personal history for most of us. There was Aling Nena’s bibingka in Cubao right under the old C.O.D. Christmas display. There is Ferino’s which I am glad is now served on board Cebu Pacific flights in bite-sized portion. There is Via Mare’s infamous bibingka. Then again, there are the bibingkas that are served in church yards or out on the street, in neighborhood fairs, in the palengke…and in my memories.

I travel the bibingka circuit on this gallivant. My first taste of this dish remains vivid. I was with my Dad, brother and sister at Aling Nena’s in Cubao. I became intimate with it over the years. And then it became personal.

For this was the time that my wife and I introduced our daughters to our childhood. Like a folk story retold, the passing of the craving began. It was a rite of passage, an assurance that the taste would live in a new generation.

We told our (then) 5-year-old what the steaming goodness was and I saw the same smile that I had the first time I tried bibingka. I was assured that a bit of my life was now embedded in her memory. I was confident about that….up until the time my precocious daughter says, “Babingka?” – Rappler.com

Tell Robert of your food memories and adventures via foodpornwriter@gmail.com