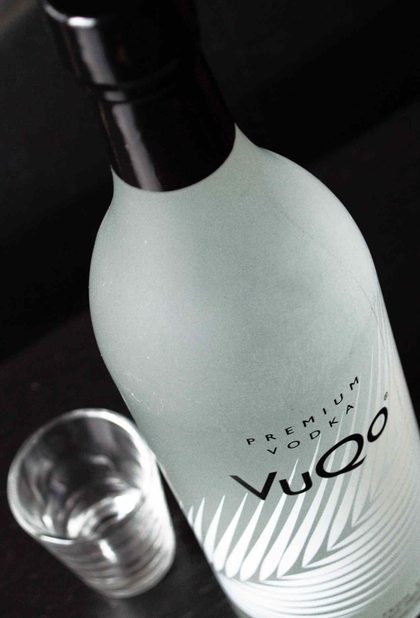 MANILA, Philippines – When one thinks of a liquor that is native to the Philippines, the first thing that comes to mind is lambanog, that strong concoction made from coconut. Considered as a traditional wine, it is known for its potency and its cottage industry roots, giving off a bucolic appeal to its drinkers.

Taking a step towards a more sophisticated alcoholic alternative is VuQo Premium Vodka, the only vodka in the world distilled from coconut, unlike others that are made from grains or potatoes.

“We like to call it the ‘refined cousin of lambanog’,” says Giselle Arroyo, VuQo’s spokesperson. “They’re made from the same raw material, tuba (coconut nectar). VuQo is, technically, a vodka and lambanog isn’t.”

Though the drink is proudly Filipino, its vision is clearly global. Since its launch in 2009 in CBS Studios in L.A. and then at the PRESS Lounge in New York, VuQo has found its bottles on the shelves in U.S. cities: San Francisco, Los Angeles, Houston, Atlanta, and New York.

Arroyo explains their assertive distribution on American shores. “Our goal is to make VuQo a worldwide brand that is competitive with big spirits like Absolut and Grey Goose.”

Interestingly, VuQo has been making the rounds in many high profile events serving its signature cocktails. These include the 2nd Annual Block Party on Wisteria Lane (a fundraiser event of the Cystic Fibrosis Foundation which had the famed TV show Desperate Housewives‘ stars in attendance) and the 2012 Beverly Hills Wine Festival.

VuQo has also found itself in the coveted award show swag bags. Arroyo shares, “We did the gift bags for the Emmy Awards last September and the Oscars just this February.” This means, all nominees got to sample the Filipino brand — no small feat!

Amping up the celebrity factor is its endorser, Filipino boxing champ Nonito “The Flash” Donaire Jr., who’s currently ranked as the #4 pound-for-pound boxer in the world.

Despite all its international activities, VuQo remains proudly Filipino. VuQo, after all, is the brainchild of Filipino-American Rich Cabael who was born in Manila but was raised in the San Francisco Bay Area.

Cabael’s Filipino roots had him thinking of setting up shop in the Philippines. An introduction to lambanog while on vacation in Bohol had him thinking. Inspired by the traditional drink, encouraged by subsequent research, and backed by an experience in the liquor industry, Cabael took the coconut-based drink’s potential and ran away with it.

Arroyo enthuses, “We are, of course, a proudly Filipino company and motivated to be a globally-recognized Philippine-made brand. Reception for VuQo has been great from coast to coast (in the US), both from the industry buyers and the end-consumers.”

VuQo is available in the Philippines too, though in just a handful of places for now — at  LU Restaurant in Rockwell, Mamou in Serendra, Carlos Celdran’s gift shop in Intramuros, and Mangenguey Island Resort in Palawan. – Rappler.com