What secret ingredient is in this Aussie version of adobo? 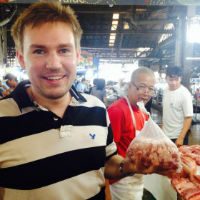 Facebook Twitter Copy URL
Copied
An iconic ingredient in an iconic dish. Philippine adobo, meet Vegemite. One man attempts to make it happen. How did it go?

The market vendor examines the jar I hand her with curiosity. I’m down at Farmers in Cubao on a mission to create a world first: a Filipino-Australian recipe, a classic Filipino pork Adobo, built not on soy sauce, but that dark by-product of Australian early 20th century brewing: Vegemite.

“Ah…Ito ang papalit mo?” (This is what you’re going to substitute?) she says.

I’ve loved cooking from a young age.  With two parents working full-time in Australia, there was no yaya (nanny). I made my own lunch from the 1st grade. Merienda (afternoon snack) was whatever I could throw together myself. My mother would arrive home to eat my cooking, not the other way around! It’s a passion that was still with me me as a college student in Manila.

I formed a fondness for Southeast Asia as a high school student in Jakarta, and pursued an Asian Studies degree at the Australian National University. As part of the Indonesian specialist stream, I spent a year studying at university in central Java, but when my year was over, I wanted to see more of the region.

It was one of those life-changing decisions one makes at 21 without a second thought. I cancelled my flight to Sydney, booked one to Manila and arrived with all my worldly possessions in a single backpack.

Down at the wet markets Just as when I studied Bahasa, I found one of the best ways to learn language was down at the wet markets. Asking about recipes, cracking jokes and haggling, I learned more about the art of communicating in Filipino there than from behind a classroom desk. It also immersed me in the food and flavors of the Philippines.

I started to see culinary analogues. Different countries have remarkably different ingredients to express more or less the same basic flavor profiles. Sweet. Salty. Sour. Spicy. Fusion cooking is really about replicating the same winning flavor profiles through the use of non-traditional combinations of ingredients. ‘Fusion’ is not some new fad, it really just describes the evolution of cuisine over compressed timelines.

More than most cuisines, Filipino food is the product of a great deal of cross-cultural experimentation over the centuries – and perhaps that’s why I’m so drawn to it.

Over the years, Filipino food has not enjoyed the same global acclaim as Thai, or Malay cooking. Perhaps there has a marketing problem: I’ll admit the ‘iconic’ Filipino dishes to be more ‘comfort food’ than ‘exotic.’

Litson, for example, I find deeply satisfying – but not spellbinding. On the other hand, I’d hold up sinigang, and laing (my favorite Pinoy dish) as two of the most unique and captivating recipes from anywhere in Asia. I think that’s starting to change with Filipino restaurants now mushrooming in leading global cities.

I still love to begin any culinary adventures with a trip to the local markets. Unlike the hip and pricey weekend ‘farmers markets’ of Legaspi and Salcedo villages, Farmers in Cubao is where ordinary Filipinos come for fresh food at great prices. I love it here, strolling through the rainbow aisles of fruits and vegetables, strings of longganisa, fresh baked kakanin  (rice cakes), prawns and lobsters on ice, cleavers slicing through the air separating joints of meat and splitting coconuts in two. The cacophony of market vendors crying out their wares. “May tawad ba dyan?” (Do I get a discount?) I ask mischievously.  “195 na lang sa ‘yo… kasi marunong ka mag-Tagalog.” (Only 195 for you because you’re good at Tagalog) The vendor grins as she gives me the thumbs up. I take a kilo of liempo (pork belly), adobo cut of course, and drop it into my technicolored bayong (traditional grocery bag). I grab garlic, onions, cracked pepper, and bay leaves.

Adobo is not a complex recipe – but I’m starting to get nervous as to whether my subscribers will mind me ‘Australianizing’ their national dish. Driving down 15th Avenue in Murphy, I remind myself why it will work: Vegemite is a salty fermented yeast extract, not unlike soy sauce, which is the foundation of adobo and gives it its colour.  And besides, what could go wrong – I’ve been fortifying my Mexican chilli con carne with Vegemite for years. I get through the cook over the next two hours – it’s hot on the set of Maputing Cooking, but I have a lot of fun. Plenty of moments for the bloopers reel. And I know this will be a hit with my subscribers in Australia. Vegemite is one of Australia’s few home grown products, deeply ingrained in the Australian psyche (not least because it is a popular hangover remedy thanks to high levels of Vitamin B). I do a shout-out to my subscribers in Blacktown in Western Sydney, where the largest concentration of Filipinos in Australia resides. The end result is a dark, glistening glaze, punctuated by peppercorns, onions and bay leaves. The Vegemite has definitely made its mark on the texture, and visual asthetic of the dish – and it smells amazing.

I match all my dishes with Australian wines, and I’m pairing this one with a Tempranillo. The bottle I have is from Chrismont, in the King Valley, Victoria. This wine is versatile, and great with salty foods, and pork. I’ve pared back the vinegar in the adobo so the acidity does not overpower the wine. The moment of truth arrives as I speak to the camera over the steaming plate of Vegemite adobo and rice: “This is a world first…” It’s saltier and earthier than traditional soy-based adobo, you’d only have it with plain rice. But the wine adds a touch of sugar, smoke and dark fruits to the palate and balances the dish.

I honestly had no idea how this would turn out but to my pleasant surprise, it worked. I already know I want to try another Fil-Aus fusion dish. My subscribers keep asking for sisig; what if I substituted kangaroo into this Kapampangan favorite? – Rappler.com

Chris Urbano is an Australian entrepreneur and host of internet TV cooking show Maputing Cooking based in Manila. Formerly a strategy consultant, Urbano specialized in Asian Studies at the Australian National University, during which time he studied Filipino language and Philippine politics at the University of Asia and the Pacific. He can be contacted at chris@maputingcooking.com