The dance of Trey McIntyre MANILA, Philippines – For 10 days, Manila was a rendezvous for contemporary and traditional dance. The Trey McIntyre Project, an American contemporary ballet company Based in Idaho, wowed the Filipino audiences with their unique style of modern American ballet.

Formed in 2008 by Trey McIntyre, one of today’s most sought-after choreographers, the Trey McIntyre Project explored not only the Philippines, but other Asian countries such as China, Korea and Vietnam. In an attempt to discover the traditions of the orient and to dig deeper into the captivating nature of the human experience, the group worked with the Ramon Obusan Folkloric Group through dance and choreography classes. This partnership was in line with Trey McIntyre’s objective of immersing in the country’s culture and of sharing the common language of dance. Executive director John Michael Schert relays that the main purpose of the visit was for both parties to learn from each other.

“(Dance) doesn’t require language, it doesn’t require words. And there’s so much you can understand through someone’s physicality and through their body. The point is to learn not necessarily about what’s being said, but to learn from the movement — what does that mean, what are the roots of it, why does it matter,” he states. According to Trey McIntyre, folkloric dance is something that has always spiked his interest. He explains how dance is not merely a sequence of movements, but an intermingling of meaning. He shares that the group quickly learnined about the Filipino culture through finding significance in the different traditional dances.

He posits, “In learning traditional dance, there’s meaning in everything and there’s a reason why everything is formed in a certain way. It has a specific origin. In that way, we share the same values and ideals. It’s a very fast way for us to learn about a new culture.” 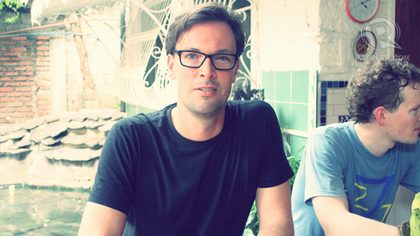 Obusan reiterated the need to educate the youth in order to keep the tradition alive. In the advent of modern technology, she explains how it is likely for the youth to take the county’s traditional art, music, and culture for granted.

“Start with the youth. Start off young so they understand where they came from,” she says. “Make them realize there’s a lot more that tradition can offer. We’re trying to educate them. That’s the best approach we can do.” Aside from education, she appeals to the government to join in preserving and reviving the Filipino culture.

Free and open to the public, the Trey McIntyre Project performed at the Central Philippine University Rose Memorial Auditorium in Iloilo and in Market! Market! Mall Activity Center, Taguig. – Rappler.com