10 tips for your next brainstorming session at work

Whether you’re working by yourself or in a team, there will be times when you’ll need a breakthrough idea to save the day. Oftentimes, however, typical “brainstorming” sessions end with nothing much because, according to former Walt Disney Imagineer McNair Wilson, “Nobody knows how to brainstorm anymore… Usually what’s going on is playful arguing with snacks on the table.”

Wilson, now an author and public speaking coach—among his many other hats—was in the Philippines in May for a lecture series called “The Curiosity Tour.” He believes that curiosity is an essential trait of all creative people—whether or not they think or know they are creative. “Everyone was born with it”, he says; some people just remained curious while others “grew up” and left their sense of childlike wonder behind. (READ: Feeling uninspired? Wise words from top creatives)

In this Rappler exclusive, we share with you some tips from a guy whose ideas have led to some of Disney’s most popular attractions.

1. Stay curious. “The best tool of creativity is a question,” declared Wilson, who was part of conceptualizing five of Disney’s theme parks and was the lead Imagineer for Disney’s “Tower of Terror” attraction. “Never stop asking questions. Be the other guy who says, ‘Why not?’”

The next time you have a problem to solve, Wilson recommends using this question: “Wonder what it would be like if we…?”

2. Challenge assumptions. Don’t accept things “just because.” If there are unwritten rules in your team or organization, ask “Why?” or “How else can things be done?”

What else can you try that may not be in the instructions or in “how we’ve always done things,” but which can still get you the results you need? Chances are, some of your ideas may work—it’s just that no one has bothered to ask or try them out.

The danger in not challenging assumptions is that you will gravitate toward the status quo, killing the chance for new ideas to flourish. In his book, Hatch! Brainstorming Secrets of a Theme Park Designer, Wilson writes, “Even when everything is ‘fine’, I say brainstorm, HATCH! That old saying, ‘If it ain’t broke, don’t fix it,’ is for people who are satisfied with life, work, and business as usual.” 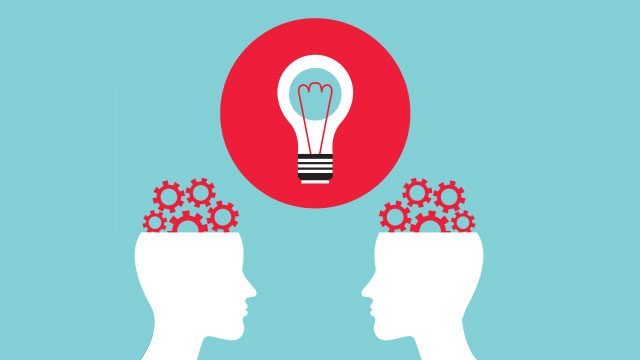 3. Think differently. Be yourself. Wilson exhorts his audience to dare to be different—to be the best versions of themselves and to “find what works” for them instead of always trying to please others.

When working in teams, Wilson encourages team leaders to give members the space to share their ideas. “Be more flexible. Let people do things their way.”

“It’s not so much the words you say, but how you say [them that’s considered blocking],” says Wilson. Do you raise your eyebrows when someone speaks up? Do you appear disinterested when someone’s pitching an idea? Do you immediately jump in to say why something “won’t work”?

Wilson proposes a shift in perspective: “Be positive—be curious! Sometimes, it’s the most unlikely person in the room that can contribute a great idea.”

When that happens, “Get out of the way of inspiration,” he urges.

5. Build on others people’s ideas. Wilson calls this saying “Yes, and…” to others’ ideas. When someone else comes up with an idea, acknowledge the idea and build on it—or even go in a different direction—as long as you don’t block the original idea.

The more positive energy flows and the more ideas are generated, the more chances you’ll have of stumbling upon your Big Breakthrough.

“If you’re brainstorming, some of the best ideas come in the last five to ten minutes. Keep pushing ‘till the end,” Wilson shares.

6. Engage all your senses. Using all the senses can help you redesign an experience, improve a product or service, identify an unmet need, or simply generate new ideas. Wilson shares the experience of a bakery off Disney’s Main Street that had a sudden spike in sales when a redesign in the chimneys allowed the scent of freshly baked chocolate cookies to waft out into the street.

Wilson also talks about the power of observation. Oftentimes, new solutions emerge from observing how people interact with a particular product or service. “You have to practice noticing other things,” he points out. “How can you take a familiar place or experience and look at it differently?”

7. Try something new. Creativity can be awakened when you try something new; oftentimes, it happens in the simplest of ways. You can try a new dish at a favorite restaurant, a different ice cream flavor, a new drink, a different route to or from work—anything.

“Sometimes, some of my favorite things are things I used to hate,” Wilson admits. And that’s where new possibilities open up. If you try something new often enough, you soon shall have expanded your realm of possibility, making it easier to accept and try new ideas.

8. Start small. Just start. Oftentimes, the barrier to a great idea is the typical “lack of time and budget.” Wilson doesn’t see this as a hindrance—even they had some scrimping to do while at Disney—but it poses an interesting challenge to problem-solving.

“Anything worth doing is worth starting poorly just to get it done,” Wilson asserts—but he doesn’t mean being mediocre. He means starting something without aiming to be “perfect”—just to get momentum going—and then improving on things as you go along.

“It’s not about a big budget,” Wilson points out. “What do you want to do? Do it.” While you’re at it, give yourself a tight timeline to force yourself to come up with something, sooner than you think.

Disneyland was losing money during the first three years of its operations. But that didn’t stop Walt Disney and his initial crop of wild believers from pursuing their wild, audacious idea. Today, the Walt Disney Company is a diversified company operating globally, with businesses in “Media Networks, Parks & Resorts, Studio Entertainment, Consumer Products, and Interactive Media.” As of May 2014, the company has a market cap of $142.92 billion, ranks No. 100 in Forbes’ Global 2000, and is No. 17 among the “World’s Most Valuable Brands.”

10. Take risks. Finally, being open to creativity and to new ideas will mean nothing if you don’t actually take risks to make something happen.

“Take the risk. What do you love to do? Do it. Find a way to put into your regular work what you love the most.”

For McNair Wilson, the thespian-turned-Imagineer-turned-wizard-of-creativity, being curious and creative is not just a great way to work—it’s also a great way to live and be.

“What do you do best? Are you using it every day? If you’re saving it—what are you saving it for?”

He emphasizes, “Find your passion—find out what it’s about, and put it in your life. You have no excuse.” – Rappler.com