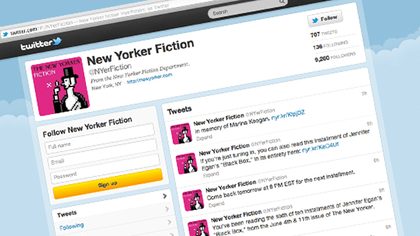 MANILA, Philippines – The microblogging site Twitter has been used for a lot of things; news organizations use it to gather and break news, celebrities use it to reach out and talk to fans, while normal folk use it to share the often mundane and sometimes interesting going-ons in their lives.

Egan is the author of several books, including “Look at Me,” which was nominated for the National Book Award in 2001. Another book, “A Visit From the Goon Squad,” won the 2011 Pulitzer Price for Fiction and the 2010 National Book Critics Circle Award for Fiction. She also writes for the New York Times Magazine.

Can’t wait for the New Yorker’s tweets? You can read “Black Box” in full here.

Serializing books via Twitter may be an innovative way of publishing works of fiction. It also provides other means for people to consume books, similar to how audiobooks provided an alternative to reading. But while there is value in the proposition of delivering bite-sized pieces of literature versus the sometimes daunting challenge of finding the time to read an entire book, the concept may also be too much of a stretch. After all, how many tweets would it take to complete an entire story? What are your thoughts? Would you consider reading a book on Twitter? Send us your comments using the hashtag #TwitterBook.  – Rappler.com