Venus, the planet of twilight beauty and broken dreams

Jun 3, 2012 11:00 AM PHT
Agence France-Presse
Facebook Twitter Copy URL
Copied
Venus has caused more grief than any other planet in the Solar System 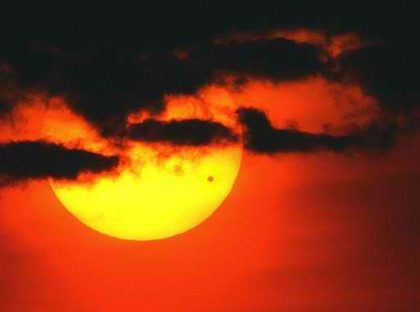 PARIS, France – When Venus next week eclipses Earth, an event that will not occur again for more than a century, millions of skygazers may have romantic thoughts about our closest neighbor and its twilight beauty.

But the truth is that Venus is a hell that would have surpassed even the imagination of Dante, and it has caused more grief and disappointment than any other planet in the Solar System.

Early science fiction figured Venus to be a twin to Earth, a balmy, watery home from home that was a plum target for colonization. So when the Space Age dawned, it was only natural that the second rock from the Sun would be the first planet for humans to explore.

For a decade, the Soviet Union and the United States battered Venus with probes.

They dispatched 21 unmanned missions, nearly all of them struck by failures at launch or in the final approach, before in 1970 the Soviet scout Venera 7 made the first successful landing.

The snatch of data it sent back left everyone stunned.

If Venus was ever Earth’s sister, it was of the sick and twisted kind.

It hosts an atmosphere of carbon dioxide with a pressure 90 times that on Earth and a surface cooked to 457 degrees Celsius (855 degrees Fahrenheit).

“Any astronaut unlucky to land there would be simultaneously crushed, roasted, choked and dissolved,” Britain’s Royal Astronomical Society notes.

Those watching the Transit of Venus next week should spare a thought for Guillaume le Gentil de la Galaisiere, whose life — portrayed in a play by Canadian author Maureen Hunter that has since been turned into an opera — was cursed by the planet named after love.

Le Gentil became swept up in the 18th-century frenzy for the Transit of Venus, which occurs when Venus swings in front of the Sun, appearing through the telescope lens as an enigmatic spot.

Next Tuesday evening, June 5, skywatchers in North and Central America will enjoy the start of the 2012 Transit, which will end on Wednesday, more than six and a half hours later, visible from Europe, the Middle East and South Asia. The next time a Transit happens will be in December 2117.

As a Transit of Venus loomed in 1761, Britain and France — at war at the time — jousted for the glory of using the celestial alignment to resolve the greatest puzzle of the day: how far is Earth from the Sun?

By figuring this out, the size and the scale of the Solar System could at last be determined.

How this could be done was proposed in 1716 by the great astronomer Edmund Halley, more famous today for the comet that bears his name.

The point was to measure very accurately, and from different locations on the Earth, the time it took Venus to cross the Sun.

Using triangulation, this would give the distance between Earth and Venus, and thereafter the gap between Venus and the Sun, using an equation on orbital mechanics drawn up by the German mathematician Johannes Kepler.

Hundreds of expeditions were dispatched around the world.

Among them was Le Gentil, who set out to observe the 1761 transit from Pondicherry, a French territory in southeastern India.

By the time Le Gentil arrived, Pondicherry had been seized by the British and his ship could not land. The French astronomer observed the transit from his vessel out at sea, but could not time it accurately because he had only a pendulum clock, which was affected by the ship’s rolling.

Knowing that the next transit was only eight years away, le Gentil decided to stay in Asia, exploring the coast of Madagascar as he whiled away the time.

As the 1769 event loomed, Le Gentil tried to record the transit from the Philippines, only to be rebuffed by the Spanish colonial authorities.

Eventually he decided to go back to Pondicherry, which by this time had returned to French ownership.

Le Gentil built a small observatory to house his precious gear and rubbed his hands expectantly as week after week the skies remained dazzlingly clear.

The morning of June 3 broke and disaster fell upon his head: clouds moved in and he could see nothing.

Driven almost insane by his luck, Le Gentil decided to return home, only to suffer a shipwreck and dysentery en route. And when he arrived back in France after 11 years away, he discovered that he had been declared dead.

His relatives had grabbed all his possessions, his seat at the Royal Academy of Sciences had been attributed to another — and his wife had married someone else.

There is a happy end to the tale, though.

Le Gentil remarried, had children, regained his place in the academy and died at 1792 at 73, a good innings in those days. – Agence France-Presse