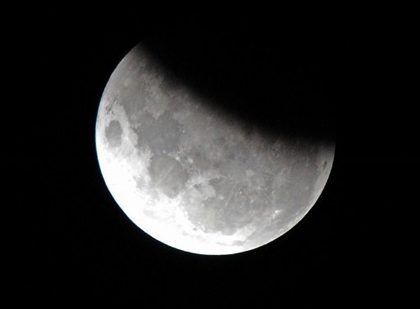 SYDNEY, Australia – The first partial lunar eclipse of the year provided dramatic scenes across Asia late Monday, June 4, with a clear moon visible to many as the event unfolded.

While Australia and the east of Japan watched as the Earth slid between the Moon and the Sun, casting a grey shadow over the satellite, those hoping to view the eclipse in Tokyo and Kuala Lumpur were thwarted by cloud cover.

“It does look a bit odd because it’s not like a normal crescent moon,” said Jonti Horner from the astrophysics department of Sydney’s University of New South Wales.

“It looks like a bite has been taken out of the moon,” he told AFP as he watched the sky.

Fred Watson, astronomer-in-charge of the Anglo-Australian Observatory in western New South Wales, said: “A partial eclipse of the moon is the kind of thing that happens every few years but it’s still worth looking at because of its astronomical interest.”

In Japan about 20 people gathered at an astronomical observatory 367 metres (1,200 feet) above sea level in Rikubetsu on the northern island of Hokkaido.

“People started to utter such words in admiration as ‘it’s beautiful’ and ‘it’s awesome’ as the eclipse neared its maximum level,” Noriko Sasaki, a worker at the observatory, said by telephone.

Hundreds of people who flocked to the National Planetarium in the Malaysian capital Kuala Lumpur after sunset to witness the spectacle were left disappointed by the clouds and instead were shown films on astronomy.

Skywatchers in the Indonesian capital were luckier as the weather cleared to give them a view of the phenomena for 90 minutes.

“It’s so interesting because you don’t get to see an eclipse like this every year,” said Ichshan Ramadan, 15, a member of a local astronomy club.

Monday’s eclipse is part of a rare double show this week which includes the Transit of Venus — one of the most eagerly awaited events in the astronomical calendar.

Skywatchers in the Pacific and East Asia were expected to have the best view of the eclipse, weather permitting.

Most of Australia, all of New Zealand, the nations of the South Pacific and Papua New Guinea were due to see it in full, while Southeast Asia, Eastern China, Japan and Korea were to witness most of it.

It will not be visible in Europe or Africa, but people in western North America and Mexico will see it at the end stages when the Moon sets.

“Actual eclipses are relatively common, there are usually about two a year,” Watson said.

“But what makes them kind of rare is that they are not all visible from everywhere, and in particular solar eclipses really are only visible from a very small part of the Earth’s surface.”

On Tuesday, North America will get to see the early stage of the Transit of Venus which occurs when Venus passes between Earth and the Sun, appearing under magnification as a small black dot that trots across the solar face.

The next transit will not take place until 2117.

Australia, New Zealand, the South Pacific, Japan and Korea, as well as most of China and much of Southeast Asia, will be able to see the entire transit, lasting six hours, 40 minutes, in what will be Wednesday morning their time.

South Asia, the Middle East and Europe will get the end part, when they enter sunrise on Wednesday. – Agence France-Presse