Facebook Twitter Copy URL
Copied
A story on Wattpad can become a box office blockbuster, be an ode to adolescence, or be kooky fan fiction starring presidents as vegetables

In the past, to be published, writers often needed to be picked up by a publishing house, discovered by a scout or agent, or go through the arduous process of self-publishing.

Today, through the platform called Wattpad, instant feedback is possible, right along with a large community of readers and fellow writers.

As Allen Lau, the co-creator of Wattpad, would put it, “we are not the ones planting the seeds, we are not the tree; we’re providing the soil, the platform.” Lau founded the company in 2006 with Ivan Yuen.

Of these 25 million, 15% are from the Philippines, making the Filipino market Wattpad’s second largest, only behind the United States.

These users can skim through different works featuring pretty much any other topic under the sun, including quite a volume of Harry Styles (of One Direction fame) fan fiction.

For instance, there’s even a story starring the President of the United States as a piece of broccoli named Barackoli, a twerking vegetable. By the way – he lives in the Green House. 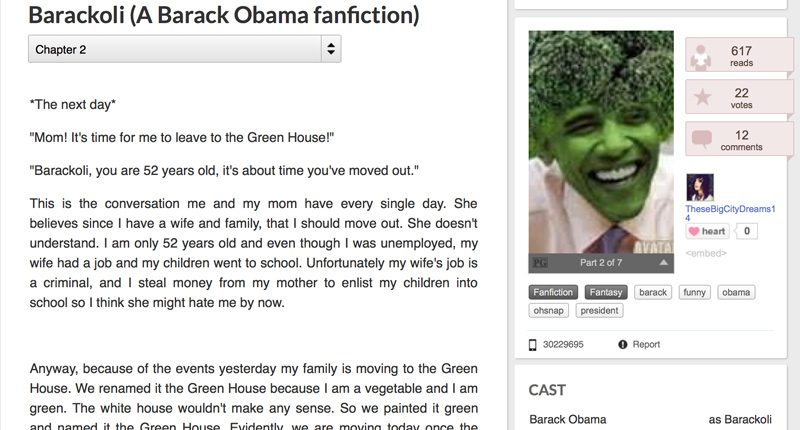 For teenagers (plus, who says adults can’t enjoy them?)  there are stories in the Romance, Fanfiction, and Teen Fiction categories. No doubt springing from fan fiction roots as well as interest in all things vampires and werewolves post-Twilight, there are more than enough stories in the Werewolf and Vampire sections for everyone.

Here’s a video of Twilight actor Peter Facinelli reacting to news that he’s been cast in a good 300 stories on Wattpad:

Books from project Gutenberg, which collects titles available in the public domain, are also available here.

And right among the Harry Styles fan fiction and the Barackoli, however, there are many other gems to be found – among them, the profile of none other than Booker-prize winning author Margaret Atwood, who is among the many users posting material on Wattpad. “On Wattpad you can put your real name or have a pseudonym, which a huge number do. Then you can get out there, get feedback, but not have that horrible expectation of people jeering at school. It’s actually a pretty pure way of getting a readership that’s not going to look at anything but your writing,” Atwood previously said in an interview with The Guardian.

Anyone can upload his or her written work on Wattpad, which is available through the web or smart phone app. There’s no fear of being the laughingstock of classmates or having to deal with an editor who might turn the entire novel upside down.

Once one’s story becomes viewable, it also becomes open to comments on social media. And even if totally eliminating troll remarks is not possible, there are still other writers who will be willing to share words of encouragement and advice.

“Maybe this part was a little much,” writes AuthorsINK, on the main character in a story called “She’s in Love With a Geek.” “She has to be very arrogant to feel this way about herself. Idk…”

“I instantly don’t like her [the main character] but I guess then we wouldn’t have a story now, would we? “ writes sarah_millis. “It’s very organic. We provide a platform. We are not trying to be a gatekeeper, it’s a very open demographic platform,” says Lau, speaking to Rappler. “Anyone can post a story. It doesn’t matter if you’re a high school student or a PhD candidate or a 50-year-old published writer. It doesn’t matter. Anyone can publish anything.”

In some occasions, a story can land a Wattpad user a spot among the site’s “most popular.” But sometimes, it can also land them on TIME Magazine.

When she was just 15 years old, Welsh high school student Beth Reekles published her book on Wattpad called The Kissing Booth, about a popular girl who falls in love with an older boy.

The novel was such a hit that it attained 19 million views, and also caught the attention of publishing company Random House, who awarded the now 17-year-old a three-book deal. Reekles was later named one of TIME’s 16 most influential teens of 2013.

Reekles’ good fortune, some would say, is once-in-a-lifetime – but it was possible through the Wattpad platform, and this is also a reality for a number of other writers online.

This includes a few Filipino authors, whose Wattpad chapters have been turned into physical books, and then later, movies.

“We can coexist very happily but the medium is actually quite different,” Lau noted in the interview.

Both stories originated when a couple of writers put their imagination to work and posted their novels on Wattpad. Diary ng Panget was based on the anime Gakuen Alice, while She’s Dating the Gangster was based on Korean dramas the writer was watched a lot.

“I didn’t even expect I’d get my works published. I was just really writing for fun, didn’t expect all of these,” Denny, writer of Diary ng Panget, told Rappler in an email interview. But it did. Wattpad played a huge role in making it possible, as Denny’s novel was read by over 21 million reads online, with over 48,500 comments from her readers. There are even Wattpad stories based on her Wattpad story.

She’s Dating the Gangster, meanwhile, generated P100 million in just a week’s time, not to mention making 15 million on its first day of release, despite the presence of Typhoon Glenda.

“Some of my readers were asking for it. I thought that maybe it would be nice to see Athena and Kenji on a big screen, that way you won’t have to imagine how they look because they will be right in front of you,” said Bianca Bernardino, who penned the book the movie was based on. It first gained traction on Wattpad before being published by Summit Media. A third movie based on a Wattpad Story, called Talk Back and You’re Dead starring the actors from the Diary ng Panget love team, will soon follow.

Lau says that social media is changing how the world operates, as well as carve out opportunities for writers who once upon a time could only dream of being published.

He continued: “But if you look at the Internet, one thing very unique…or I should say the Philippines’ Internet is global, it’s connected and it’s also instantaneous. What I mean by that is that you as a writer, after you write, say the first chapter of the story, and then you post it on the internet then potentially, like, billions of people can see this instantly.”

While Lau believes – and it is possible – that print and online media can co-exist, there’s no doubting that the advancement of modern technology and social media is not going to halt. New and better smart phones and tablets come out every few months, creating new ways of garnering and sharing information. A whopping 80% of all Wattpad users experience the app via mobile, according to Lau.

The social element to Wattpad inevitably also changes the creative process, as writers can upload by chapter and view feedback – which may in turn change the succeeding chapters. Another skill that’s brought to the forefront, says Lau, is the way the writers interact with their fans – another component that’s highlighted by the social aspect attached to Wattpad success. “In the old days the consumption experience was reader only. It was solitary, but now it’s actually very interactive…you can talk to anyone around the world and that’s actually very powerful.

And then for the writers, the number one motivation that we’ve found for writers is actually people reading and through the appreciation of their [writers’] creation. This is something you cannot simply get or easily get in the old medium, because it’s just not connected with the readers directly as a writer, right?” says Lau.

The shift to the more social element via Wattpad, which allows writers a ready and growing readership, has also allowed for some surprising, and encouraging, indicators as to its global reach.

Lau said that one memorable moment came when he read a comment saying that one reader couldn’t believe that her story was right next to Margaret Atwood’s. “That speaks volumes in the type of company and type of community that we’re building, because we’re all about equal, all about openness. And we give everyone the same opportunity. We treat everyone the same,” he says.

Aside from the book to movie adaptations, Wattpad is also exploring new ways to draw a new audience. The company recently teamed up with the USA Network to produce Wattpad material for one of their shows called Dig, starring Harry Potter actor Jason Isaacs.

Dig is about an FBI agent who discovers a plot that’s been in the pipeline for thousands of years. The Wattpad stories feature a prequel leading up to the series’ first episode. The series is created and produced by Tim Kring (of Heroes fame) and Gideof Raff (of Homeland fame), according to Variety.

And having raised a staggering $46 million in capital, as announced last April, things are set to move at an even faster pace for Wattpad. The funding will go to expanding its team, and “product development and community growth,” according to the release on the website.

Lau says that after quite a few twists and turns, the funding comes at the right time: “We know we have to have the right product for the right market and that’s why we want to have sufficient capital so we can prepare the company for the next level.” – Rappler.com Naveen Ganglani is a correspondent and writer for Rappler.com who spends a lot of his time watching movies, flicking through TV shows, and reading novels when he isn’t penning articles and covering events. On most days, he likes to watch re-runs of Friends as he hopes to master Joey Tribbiani’s “How you doin’?” pick-up line. Follow him on Twitter: @naveenganglani