Jun 12, 2012 2:52 PM PHT
Rappler.com
Facebook Twitter Copy URL
Copied
The team joins the list of groups that have filmed themselves lip dubbing to the popular song 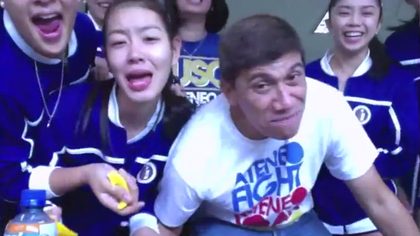 Add the Ateneo Women’s Volleyball Team to the growing list of groups that filmed themselves lip syncing to “Call Me Maybe.”

The team’s video, which was uploaded on June 10, has already been seen more than 48,000 times on the popular video-sharing and social networking site YouTube.

According to uploader “mariejuana,” the video was “mostly taken” right before Game 1 of the Shakey’s V-League Finals. Ateneo lost to the University of Santo Tomas Tigresses in the opening match of the Finals series, but later took the next two games to win their second straight crown.

The Ateneo Volleybelles aren’t the first varsity team to “cover” the popular song. A month ago, the Harvard Baseball team did a widly popular version of the meme — to date the video has over 12 million views. Late last month, several local celebrities did their own video which has since been viewed one million times on YouTube.

What do you think of this latest “Call Me Maybe” lip dub? Is the trend getting old or do you want more versions? Let us know! – Rappler.com