Jun 12, 2012 2:26 PM PHT
Jonathan Baldoza
Facebook Twitter Copy URL
Copied
The depth of Nixon Marquez's thoughts as a Panty Monster are yet to be uncovered 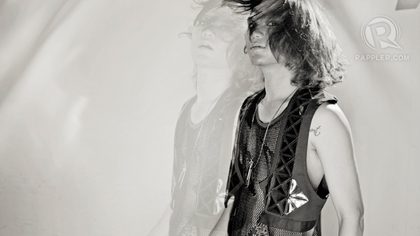 MANILA, Philippines – Nixon Marquez may be a soft-spoken young man, but his designs and rising fame speak loudly of his innate talent and skill.

Having been part of the recent Philippine Fashion Week Holiday 2012 (and numerous other fashion events), Nixon says — with humility — that he’s glad he’s making a name for himself in the industry that he venerates. He feels very accomplished whenever he finishes a complete outfit.

When asked about the Panty Monsters, Nixon quietly answers, “The best thing about them are the outfits.”

Speaking like a true fashionista, Nixon adds, “You can consider yourself a fashionista if you can style and express yourself freely in public.” Freedom is what he enjoys most with the Panty Monsters, as he can do and wear whatever he likes.

Nixon’s main hobbies include sketching and partying, although he was once a volleyball fanatic. He is also a movie buff; among his favorites are Pulp Fiction and American Beauty. He also goes for indie music. Right now, his playlist has “Ready for the Floor” and “One Life Stand” by Hot Chip, among others. Nixon says he likes the designs of Gian Romano, because Gian knows how to “play with fabrics, especially leather, which is hard to manipulate.” He also likes Alexander Wang because of his work’s “freshness” and Haider Ackermann for knowing how to “combine androgynous with glamorous.”

According to Nixon, his personal style used to be “wilder.” Today, it’s simpler, more casual and more “easy-breezy.”

His dream is the dream of so many young fashion designers around the world: to break into the international scene.

When that day comes, Nixon says he wants to dress Anna dello Russo or Daphne Guinness, and the members of the male Korean group Big Bang. “If you’re beautiful inside, it would eventually radiate outside.” – Rappler.com